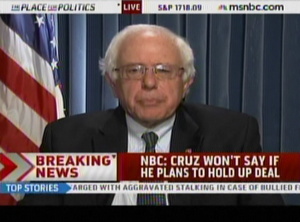 Later yesterday, the leftist CBC introduced an interview with the extreme left-wing Council of Canadians, describing them only as “a national citizens interest group.” No specifics as to their place on the political spectrum, because of course they are left-wing extremists. They are overtly socialists.

I tweeted (typo should be ignored if you love me):

So let's get this straight: tea party is "far-right"; but fCouncil of Canadians is "a national citizens interest group."

Another left-wing extremist group, the Canadian Centre for Policy Alternatives (where the “alternative” is socialism), is almost always described by the CBC as completely politically benign. Here’s an example of that:

I found one instance in which the CBC declared them as “left-leaning”. Left leaning? They are socialists. If socialism is “left leaning”, then I’m a “barely moderate center-right sort of progressive-conservative guy.”

Then a former federal NDP candidate, Peter Thurley replied “they are”:

"Right wing extremists" think government should live within its means. And within the constitution. Nutbar radicals.

I tried to clarify with Peter Thurley that if he thinks tea party folks are “right-wing extremists,” does he think socialists are therefore “left-wing extremists.” After much prodding for an answer he clearly felt uncomfortable about giving, he replied “They’re not.”

So Peter Thurley, who is a member of the socialist NDP, thinks socialists in the Democratic Party are not left-wing extremists, but thinks tea party members in the Republican Party are in fact “right-wing extremists.” (Bonus: the irony of an extreme left-winger like Bernie Sanders calling anybody “extreme” anything, particularly on the ever-so moderate MSNBC.) Point is, Peter Thurley apparently thinks socialists are just plain old middle-of-the-road moderates. This indicates his place on the political spectrum, and trust me from an intellectually honest standpoint — it isn’t anywhere near the moderate middle.

So he’s much like the CBC in that regard. Trying to re-align the political spectrum such that conservatives are “far-right” and “extremists” or “radicals,” and socialists and (in the case of the CBC anyway) eco-terrorists are “moderates” or are at least unremarkable (ref this article).

Previous articleTerrorist anti-fracking rioters with many firearms — but not “AR-15” or “military assault-style” this time? Huh.
Next articleAfter terrorist riot by anti-fracking goons, far-left org calls it “peaceful protest.”