As I fight to stay awake not-eagerly awaiting the results of the Ontario Liberal Party leadership race, which I don’t really care that much about, and which I’m only really watching because I’m waiting for Jo-Anne to come back from walking our dog Sammy, I’ve come across some of the usual things that bug me. Here’s some:

• Many Ontarians say “aboat” instead of “about.” They speak of a “hoase” instead of a “house.” I do not know what is the matter with these people. They really should learn how to speak.

• I read another one of those articles in the paper this morning in which they pass off a state-owned, state-run government operation as a private corporation, thus continuing their long tradition of blindly, blithely blurring the lines between actual private enterprise, and big, politically progressive government mendaciously posing as private corporations, meddling in private enterprise, wrecking it and capitalism, as they have been doing for decades.

And this all reminds me to re-read Jonah Goldberg’s fabulous book “Liberal Fascism [PAID LINK — As an Amazon Associate I earn from qualifying purchases].” But anyway…

Today’s news article didn’t quite rise to the level of the egregious, oft-referred-to-by-me 2008 example from the Vancouver Sun about an aggrieved guy suing what he apparently forget or didn’t know was the fully state-owned, state-run BC Lottery Corporation, for ripping him off, and was quoted in the paper as saying “It’s about keeping corporations honest, that’s really what it’s about.”  It’s hard to top that powerful an example of the success with which the liberal news media and, more generally, the progressives, have succeeded, over decades of teaching people, to fail to understand what’s really going on around them, which is progressivism or Fabian Socialism.

Today’s article in the Sun 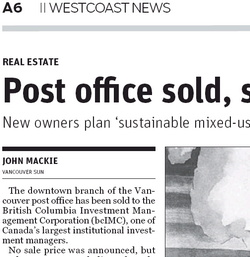 is about a rather simple real estate and property development transaction. Canada Post, the state-owned, state-run government “corporation,” which is well-known to be a government operation, just sold its mammoth downtown Vancouver mail sorting plant. That’s fantastic. I always hated that the government owned that fabulous piece of what could otherwise be valuable commercial office space, useful to normal free-enterprising citizens to conduct business.  The problem is (a) that they sold it to yet another state-owned, state-run operation; and (b) the newspaper (again the Vancouver Sun), once again failed to be transparent about the true nature of the “corporation” involved. To wit:

VANCOUVER — The downtown branch of the Vancouver post office has been sold to the British Columbia Investment Management Corporation (bcIMC), one of Canada’s largest institutional investment managers.

BCIMC isn’t a household name, but it quietly invests “more than $95 billion of managed gross assets,” including B.C.’s public-sector pensions.

It owns several buildings in Metro Vancouver, including downtown landmarks like Park Place and the Evergreen Building, Willowbrook Shopping Centre in Langley and Broadway Tech, a 1.1-million sq. ft. campus at Broadway and Renfrew. It is currently building 745 Thurlow, a 23-storey office tower on the old Keg site at Thurlow and Alberni.

Nowhere is it explained that the “corporation” buying the property is actually another state-owned, state-run government investment trustee, this one being provincial instead of federal. They do go so far as to describe it a little, starting with “one of Canada’s largest institutional investment managers.” But that’s it. That’s all that matters to them? I don’t really think so, but that’s all they’re telling us.

Is it not important to anyone but me that it’s not really a private corporation, despite their making it sound as though it is?

For their own part the “clients” that BCIMC lists are all government, even though they don’t actually come out and say that.  The “insurance funds” they refer to include, as best I can tell, nothing more than yet another big government operation called “Worksafe BC”  —  which is the more politically-correct name slapped on to what is really the BC Government’s Workmen’s Compensation Board of B.C. (renamed to Workers Compensation Board of BC to appease feminists).

Like at all government operations posing as corporations, nearly half of the board of directors are appointed by the government. The BC Minister of Finance appoints three directors out of seven.

Trust me on this: henceforth, when there are complaints about the design, the style, substance, the quality, or rent increases as time goes on, within the development, they will lay blame at the feet of “the developer” or “the corporation,” and not refer once to the BC government, thus further advancing the negative narrative against actual corporations  —  instead of at big, huge progressive government.

So that bugs me.

• On a totally different topic, a good read today by the Globe & Mail’s Margaret Wendt about Obama’s latest rather brainless feel-good, appease-the-base move to allow military women to fight on the battle fields on the front line.

Women in combat: Let’s get real

…But please, people. Let’s get real. Women cannot equal men in ground combat, the kind of dirty, brutal stuff that (fortunately) makes up a very minor part of modern military life, especially post-Afghanistan. It’s not that they can’t be trained to kill – they can. The issue is that the physical differences between men and women are very large, and on the battlefield, they really matter, and can’t be wished away. Men are better fighters because they are bigger and stronger and can endure far more physical punishment before they break down.

The average female soldier is “about five inches shorter than the male soldier, has half the upper body strength, lower aerobic capacity and 37 per cent less muscle mass,” Stephanie Gutmann, author of The Kinder, Gentler Military, wrote in the New Republic. “She cannot pee standing up … She tends, particularly if she is under the age of 30 (as are 60 per cent of military personnel) to get pregnant.”

• And my wife (a woman) is back now, so mercifully, I can stop watching the Liberal Party leadership race. As I type, it appears to be aboat over, with an openly gay woman named Kathleen Wynne, who is married to another woman, set to become Ontario’s new premier and leader. I bet the media will make it ab-so-lute-ly clear that Kathleen Wynne is a lesbian. 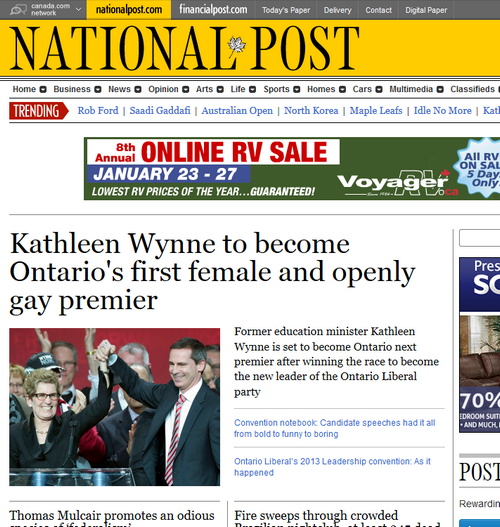 Previous articleWhen I Want a Progressive’s Opinion on What Guns I “Need” or “Don’t Need”…
Next articleProgressives — the liberals & far left — always claim to want “fairness” or “justice.” How about for Sun News?