Roaches can vote too? 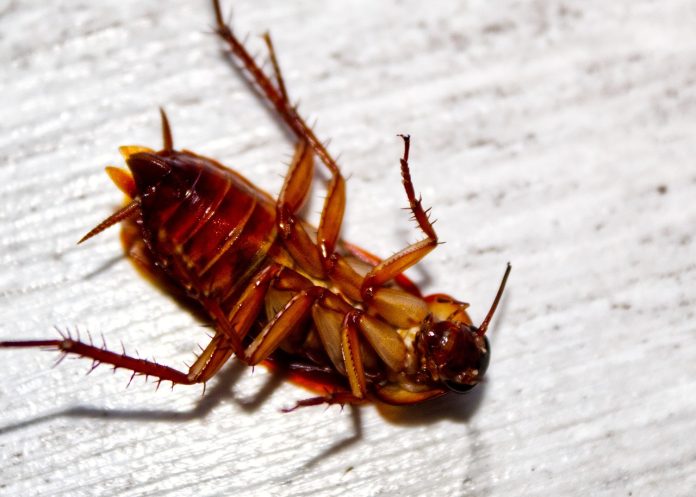 “Democracy dies…” to borrow part of the left’s Washington Post division’s tendentious slogan (they suddenly invented it when Trump was elected), when the news media deems it to be a “threat” if one particular political party that the “news”paper or journalist doesn’t like, wins any elections. If you read this Globe and Mail piece, it quickly becomes apparent that journalist Jen Gerson is in high dudgeon over the US Supreme Court’s recent abortion decision, and wanted Democrats to win the midterms because… abortions. But darn the luck, voters seem to be worried about actual “life” things like buying food. Democracy stinks! Because a Republicans wave “threatens” to crest!

Gerson and the Globe & Mail have nothing on MSNBC (think state-owned CBC but with Jagmeet Singh in charge) and their guest on the Chris Hayes show: presidential historian Michael Beschloss. Jonathan Turley summed it up perfectly in his piece on it today: 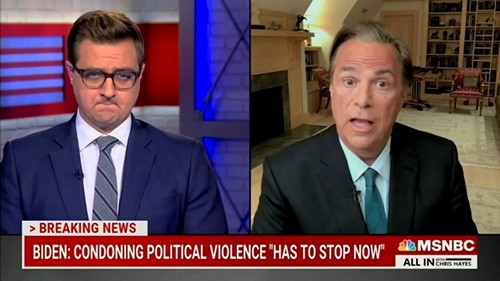 …On MSNBC’s “All In with Chris Hayes,” Beschloss went all in on the  “democracy-or-death pitch” before the midterms:

“[S]ix nights from now, we could all be discussing violence all over this country. There’s signs that may happen, may God forbid, that losers will be declared winners by fraudulent election officers, or secretary of state candidates, or governors, or state legislatures…

We could be six days away from losing our rule of law, and losing a situation where we have elections that we all can rely on. You know, those are the foundation stones of a democracy…

Joe Biden is saying the same thing tonight, and a historian 50 years from now – if historians are allowed to write in this country and if they are still free publishing houses and a free press – which I’m not certain of – but if that is true, a historian will say what was at stake tonight and this week was the fact whether we will be a democracy in the future, whether our children will be arrested and conceivably killed.”

So much for gas prices. The choice is now voting Democratic or lining up your children in front of a firing squad…

Never mind the Democrats who, despite their name, worked for years, with the very able aiding and abetting of their compatriots in the “news” media and allegedly even the FBI and others in the Justice Department, to make Americans believe Trump was illegitimately elected in 2016 because “Russia.” It was actually because the democracy elected “not them.” (Trump has his own denial — and other — problems; none of which I seek to defend!) They talk a big talk about democracy today when just five minutes ago they were doing a very fine job of helping to wreck it. 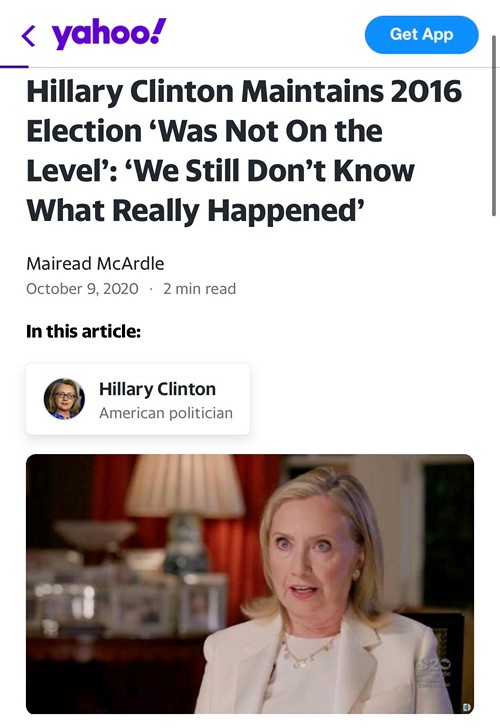 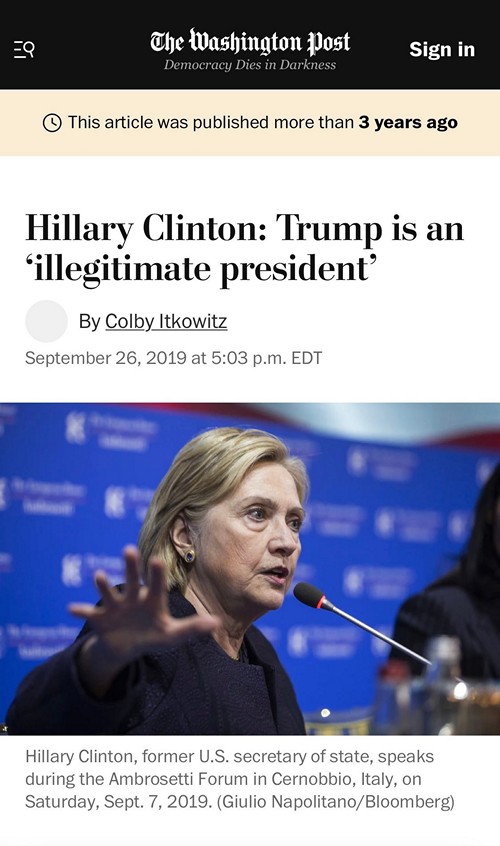 And let’s not let the abominable Democrat Stacy Abrams off the hook either. She still thinks she’s the real Governor of Georgia after the last election, which she didn’t concede, and hasn’t said whether she’d accept defeat next week. 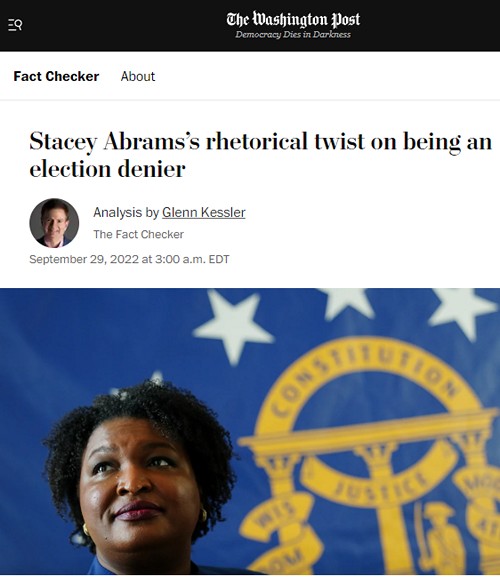 So THE VIEW is awful. I don’t mean the view out my window. That’s fine. Bamboo out on my right, banana tree on the left. No, I’m talking about The View, the TV show. It’s got little to see or hear from on the right, and embarrassing nonsense craptalk on the left. It is a pernicious, awful, garbage show, and should be removed from existence just to improve, well, the view (and how people might perceive women). Here’s the ironically-named “Sunny” Hostin (a panelist who, like fellow panelist “Joy” Behar, is among the most dour, unhappy and angry people I’ve ever heard to say nothing of her vacuity) claiming that white women who vote Republican next week are “roaches” who seek to be killed by an insecticide. Vote Republican because you want to be KILLED. You ROACH. 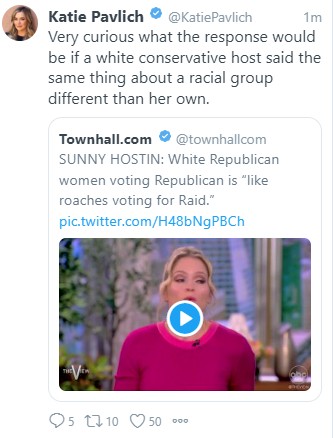 I’m old enough to remember when a Conservative politician, Peter MacKay, got into huge political and “sexism” hot water — an enormous uproar ensued, with overwrought righteous indignation from most every single feminist, fake feminist, liberal and leftist and much of the news media all demanding as if in a chorus that he resign forthwith… because he told the (female!!!!E%[email protected]) leader of the NDP to “stick to your knitting” (and it was actually very good advice — advice which my mom often gave to me, and I don’t even knit). And how are liberals reacting to Sunny Hostin and The View today?

National Review (that’s a better view!) put the trash that Hostin spewed much more kindly than they needed to in their report:

On the abortion issue, Sunny Hostin said women who vote Republican will be voting against their own interests, tone-deaf to the fact that many women find the procedure and the government’s potential facilitation of it morally reprehensible.

But it was left to the token non-leftist on the View panel (although I’m quite sure she would object to that characterization), former Trump official Alyssa Farah, to tie it up into a neat little bow for the apparent democracy-hating and willfully blind dumb-dumbs filling the other panel seats:

Farah objected, “That’s insulting to the voter. Do we love democracy or not? People make decisions on what’s right for their family.”

“Insulting to the voter” to be sure. And to the concept of democracy. But also, she’s basically just been called a roach and a dumbass. By her fellow panelist.

Democracy dies in darkness, yes. Also if you buy into any of the crap the leftist liars and demagogues and propagandists are selling you on TV and in the “news” media.

Previous article
“Made in China” Canadian flag pins bought by Trudeau Liberals
Next article
Your Tax Dollars… being pissed away: CBC advises women to pee outside like men