Home Canada Reason 9,376 why governments shouldn’t be in business 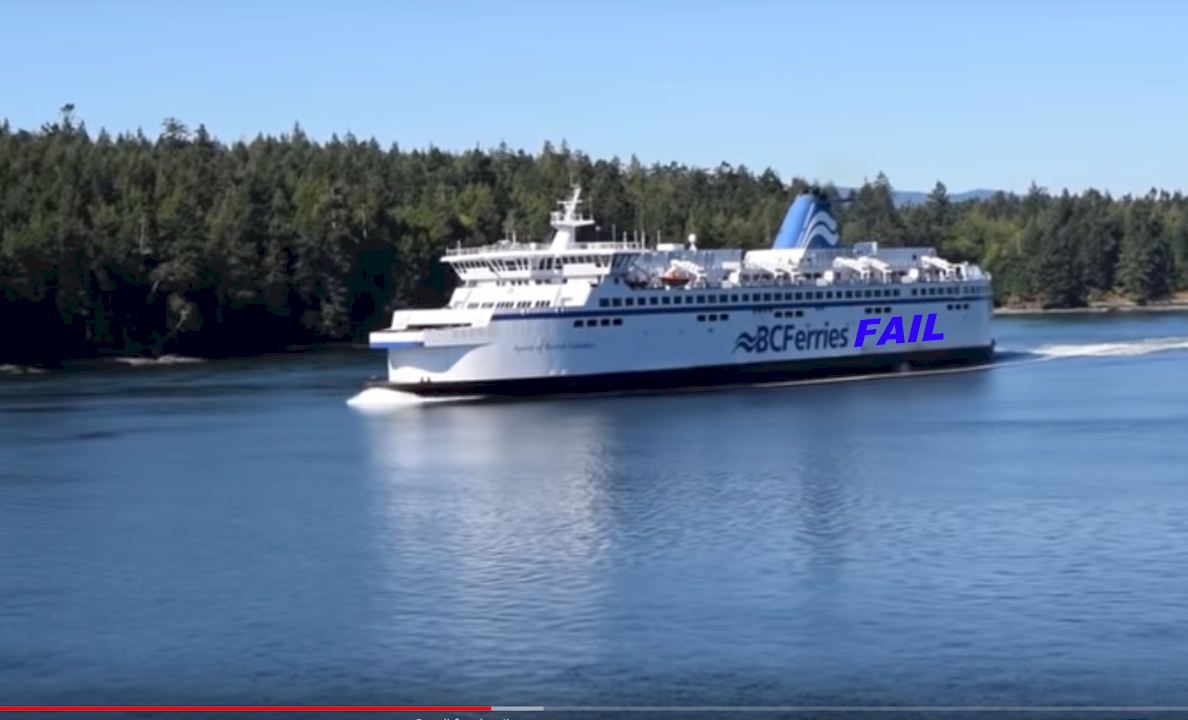 There are at least 8,000 reasons why government shouldn’t be in business, not counting the 30 or so reasons reserved for the horrid and nationally degrading state-owned CBC (my mottos for the CBC include: Dump the CBC; instantly improve Canada!).

Here’s a non-CBC one: In 2014 BC’s state-owned B.C. Ferries sold a ship on a route they decided to cancel, because the route was losing $7 MILLION per year. Sounds like a reasonable decision but for the fact that the only reason socialists can find for socialism and for the state owning the means of production is exactly this sort of thing: money-losing routes that the private sector wouldn’t touch, and yet they need to be touched, due to some explanation supposedly (but not really) concerning life and death or whatever, or to use their vernacular, “reasons.”

And so here’s what happened: the Queen of Chilliwack, which had just undergone a $15 million reno by the state-owned BC Ferries (also known as taxpayers), was sold to a former B.C. Ferries engineer in Fiji for $1.8 million — for his private ferry operation.

Also note this important feature of free countries, the thought of which still lingers in the minds of some: just about anybody in BC would have been happy to score that kind of deal, and run a ferry business, but for the fact that the BC government and its militant, extreme left-wing, nay Marxist, labor unions (currently being dry-humped by the NDP government) absolutely prohibit competition on its routes from the private sector — which has long sought entry into the market almost as if it’s a free democratic country with a free market and free enterprise.

But it gets worse.

The BC government then decided to un-cancel the route. No good reason. Just ‘cuz.

So they went on the hunt for a used ship, and found one in… GREECE! Yes Greece. Of course. Because Canada and America are bereft of any used ferries. So they sent a team to Greece (of course a team — despite the “climate emergency”!), paid some ship-certifying outfit to check it out and certify it, paid the private Greek shipping company $12.6 MILLION, wham bam thank you ma’am, had her sailed to her new home.

But it gets worse.

The ship was then more fully inspected. Yes, only then, after arrival. After they got it delivered from Greece. And what did they find? A total shitshow. Insulation missing, sprinklers not connected or working, elevator busted, it was rusting out in key mechanical areas, propeller shafts were worn out — a total nightmare.

So they refused delivery, right? Well no, this is a government-run business, not a private one which would have inspected it properly to start with. So they accepted it and started doing a massive reno using more BC taxpayers’ dollars. (For those of you who don’t know, there’s a huge quantity of extra cash lining your pockets.)  Long story short, they spent $76 MILLION on the reno.

It can’t get worse. Can it? Let’s wait and see. It only just started re-servicing the route. Which is losing $7 MILLION + per year. Read this news story about all this: “B.C. Ferries’ new ship a nightmare reno of surprises and expenses.”

But I can’t leave without hitting on the state-owned CBC. This time about its latest plans to use their state-owned enterprise to steal more ad revenue from private broadcasters, who along with lots of private media, are going broke, just as planned.

It’s a brand new CBC television game show that they totally invented themselves, and — what bromide do they use? “Helps Canadians understand Canada better”? And which the private sector would never risk doing and yet it’s vitally important to the salvation of the nation as a whole (or whatever other BS claptrap excuse socialists use to steal your money). It’s called… wait for it…. Family Feud Canada! Yes it’s the ever so new Family Feud that American private enterprise invented for private television profits literally 45 years ago.

Speaking of families, the CBC-loving Toronto Star admits in its fawning story this week that the second-hand show will “duplicate the format of the long-running American show.” God knows we don’t want them trying to do a reno! So that’s some good original Canadian CBC crap coming your way right there.

For another perspective, another family member wrote “The CBC has no business chasing ad dollars with low-brow game shows.” That rather high-brow opinion was written at the Globe and Mail, which is surprising given that decades ago, they joined the rest of Canada’s liberals who run our private-sector media, and have jointly, and in amazing unison, face-licked the state-owned CBC all day long. They’ve tirelessly excused and defended it no matter what idiocy they got involved in over the decades, ruining to a great extent their own businesses, and they’ve helped build it into the utter socialist-business-model disgrace that it is today.

But don’t worry, “Family Feud Canada is the last straw,” says the author. Oh that’s the last straw? The CBC, being fairly blatantly — even to leftists — left-wing oriented (their very business model depends on a socialism-friendly outlook and a socialist “business” model), sneering at conservatives and conservatism and fostering their ostracism in the Canadian political psyche, helping wreck the broadcasting and news business in Canada, and spending countless tens of billions of taxpayer dollars over the useless years that they’ve wasted our time and denigrated our status as a free democratic nation — was all aces. But Family Feud Canada is the last straw? Survey says: that’s hideous.

The government has no business being in business, and that’s something I would write into the much-needed constitution reno.