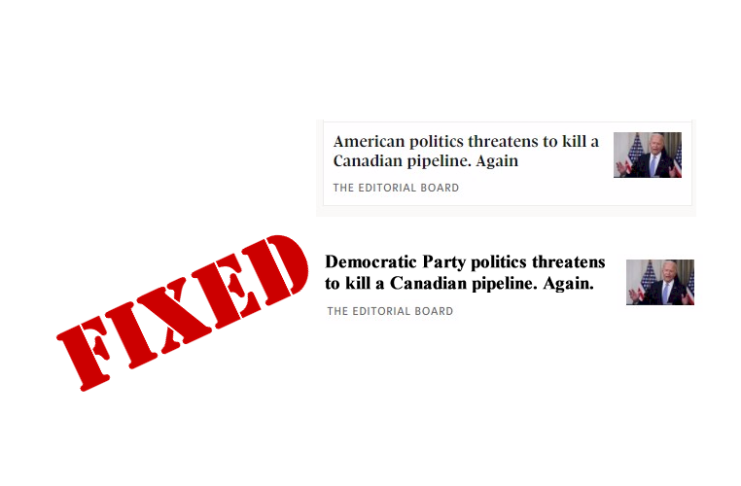 Reminiscent of their treatment of Canadian political scandals, whenever they’re LIBERAL or NDP political scandals, the “news” media rename them “Ottawa” or, say, “Opposition party,” or in a case of malfeasance in BC’s NDP government, it’s a scandal in “Victoria.”

Today the G&M’s editorial board is on about a purely DEMOCRAT problem in the U.S. — only they refer to the troublemakers as… “American politics.”

And it has less to do with “American politics” than with “left-wing virtue-signaling and climate freak-out politics.” But let’s not quibble.

Even as they go on to list the Democratic culprits in this “politics” affair, they can’t seem to bring themselves to join the dots and call it what it is: “Democratic Party Politics.”

First there was president Barack Obama, who vetoed the Keystone XL pipeline in 2015. President Joe Biden reaffirmed that on his first day in office. …

I think what the G&M editorial board meant was, President Obama with a capital P.

But their third-grade grammar errors aside, they might also preface his name, and Joe Biden’s, with “Democrat,” as they would most certainly do for anybody remotely conservative — in the latter case with what they deem as the scary warning label “Republican” or “Conservative,” or when they can get away with it, “right-wing” or better yet, “far-right” (referring to anybody right of Elizabeth Warren).

Shutting Line 5 was among Gretchen Whitmer’s promises when she became Governor in 2018. It was an obvious target…

They might have mentioned, once again, and since this is, after all, about “American politics,” that (Michigan Governor) Whitmer is a DEMOCRAT flavor of said politics. A far-left one at that.

The Biden administration would prefer to ignore Ms. Whitmer’s gambit; a close ally of the President, she seeks re-election next year. For her, opposing Line 5 delivers political returns, with costs borne by Canada. …

The Biden administration is notably DEMOCRATIC and indeed dominated by far-left Democrats. (They did at least give him a capital P.) And they failed to bother to tell you about that other “American politics” problem they loved to talk about so much for the past 5 years: (Republican!) President Trump, who famously gave his endorsement of the Keystone project, thus being exactly NOT a political problem.

They mentioned “Democrats” once in the article, but the headline and editorial are really about deflecting. As written it is about anything but Democrats or leftist and their usual climate politics and hypocrisy and lies, yet that is what the actual news is all about.

Load more
Previous article
Molnupiravir — a life saver being slow-walked by governments.
Next article
Poll: More than half of San Fran residents plan to ditch