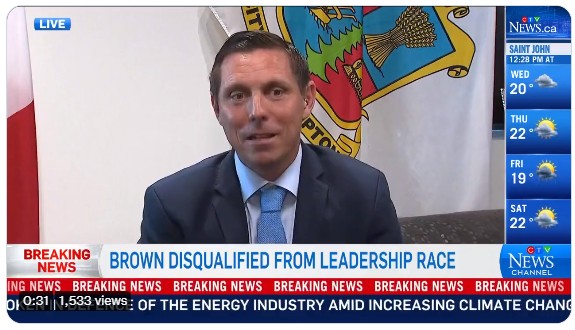 But the way Brown is behaving today as a result of this decision is, well, let’s just say it validates what a lot of Conservatives and conservatives have been saying about Brown: he is not and never was much of a conservative — or at least much of a Conservative.

Today Brown is trashing the Conservative front-runner Pierre Poilievre today as he (Brown) makes the media rounds trying to drum up personal sympathy for some reason (or possibly better described as lashing out like a baby). And of course, liberlvision CTV, where he made the remarks, is right there to feature the remarks for all the world to see. Perfect! 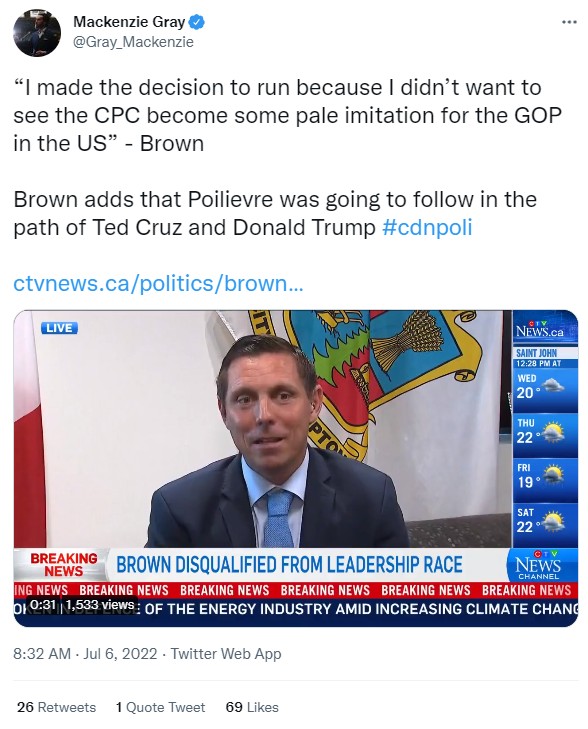 I totally understand being bitter about this with the Party he hoped to lead, and much more needs to be revealed here to be sure. But this is not mature behavior, nor is it designed to boost the chances of the party’s victory in the next election, it is designed to badmouth the party and stymie those hopes. He’s literally playing the NDP/Liberal “Trump” and “Ted Cruz” card here, as you’d expect the state-owned CTV or liberalvision CTV pundits (sorry — “reporters”) to do. He’s playing to the political idiots on the left. He now wants the Conservatives to lose? Are these his principles at work here? Or is this pure vindictiveness? Is this showing calmness in a crisis? Taking the high road? Or is it actually demonstrating horrible weakness and serious character instability? Who benefits from this? The Conservatives he wanted to lead? Hardly. So it does leave you wondering what kind of character Patrick Brown is.

I’ve read a number of supposed hot takes about this (and a great many cold) — like Warren Kinsella’s in the Toronto Sun, which wasn’t so much hot as it was lazy (which they aren’t always, and in fact they’re sometimes quite illuminating, which is why I said “lazy” in this case). But as it turns out, it did hit a mark. It was written before Brown’s remarks today, and it was headlined “Disqualifying Brown an indictment of Conservative Party itself.”

It is about how his hero, Jean Chretien, always joked about how the Conservatives had an amazing ability to lose elections that were theirs to win. I don’t agree, as the headline implies, that this is some sort of a “self-own,” as in the party indicting itself with this move. Whether you agree with it or like it, or not, what the Party did was likely the right or ethical or legal thing to do, and doing it might actually bolster its appeal to Canadians, given that it shows a stark contrast with the corrupt Trudeau Liberals who never fail to choose the more corrupt path. No, it wasn’t the Party who indicted itself, it was (now former) candidate Brown who would actually launch a horrid indictment against (and a lazy one too, if you can call an indictment “lazy”), against its front-runner, and thus of the Party, and he did this all by himself. And I challenge you to provide any logic or reason to bolster this move. The Party gets enough indictments from the “news” media who can’t stop “fact-checking” Conservatives every time they open their mouths or type words about the latest Trudeau Liberal asininity.

So let’s watch for left-wing pundits (and “reporters” but I repeat myself, yadda) to endlessly repeat the lines so handily provided by Brown (this is exactly the kind of “news” they love to report!), and to constantly “question” — feigning deep concern over “our democracy” — whether Poilievre is another “Trump,” a “truckist,” or a “Ted Cruz,” etc., (barf), now. Reporters are nothing if not lazy.

This reminds us all to more thoroughly vet candidates for their true, solid allegiance to their party, early on. Which I did, and it proved correct in this case.