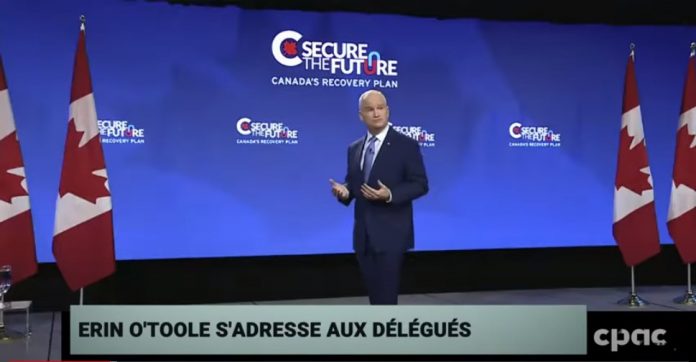 “We can’t make the same arguments and expect to win.”

“Must have the courage to grow, be bold and to change.”

“We have to change.”

So said Conservative Party leader Erin O’Toole in his big keynote address to the Conservative Party’s convention last week, which exactly nobody in Canada was even aware of, much less did they watch online. So nothing’s changed there. And he might want to address that.

But lack of arguments isn’t the “change” he’s talking about. He seems to be talking about changing into something more liberal. Trudeau’s recent pitch (shared with Joe Biden in an amazing coinkidink), was “build back better.” O’Toole’s seems to be: “do all that Liberal shit, but do it better.”

“The same arguments” that he waxes on about haven’t been made by Conservatives for a long time. Long gone is all talk of tax cuts (even as Team Trudeau now threaten huge tax increases after historically insane spending and national debt surpassing the TRILLION DOLLAR mark), and talk of reducing the now Soviet-size and China-style power of big central government, and warnings about the already massive but now exponentially growing regulatory state.

New policies that excite and change Canada for the better would be a change. But O’Toole had none of that to tell us about. I didn’t hear one bold thing in his speech, which was nonetheless about how we have to be bold, and how we have to have the courage to change.

Canadians don’t understand the Conservative position on things. What Canadians do have is a cartoonish and archaic image of Conservative policies, as taught to them not by Conservatives but by left-wing Conservative-hating academics, and left-wing Conservative-hating media. So a nice “bold” “change” would be to once and for all, using this rare opportunity, make sound, irrefutable arguments, solidly, clearly, Ronald Reagan-style, explaining the Conservatives’ smart and scientifically-sound policies. Conservative do (or could) have great ideas on climate change, abortion (sadly, the leader of the Conservative Party will have to sit down on this one, while Conservative arguments are made by the conservatives in the party), on gun policy, the exploding national debt, a growing reliance on government and how dangerous and ruinous that is, addressing taxation fairness (how about that flat tax?), the size of government, the Conservatives’ stance on the left’s cancel culture industrial complex (again, O’Toole may need to take a seat after canceling Derek Sloan), the hideous and democracy-threatening bias in the media and academia and in the tech world, China, “systemic racism”…

Moreover, simply providing the answers — in advance — to all the well-known, tedious, tendentious media questions typically asked a thousand times over of every Conservative candidate —would have been a fresh change.

If he’d just stood there (not meandering around the stage like some damned professor) and made those solid, clarifying arguments, I think opinion polls might have swung right, even as he was speaking. As it stands, polls are not looking good, and I see no improvement being made as a result of this.

O’Toole laid out a five-point “Canada Recovery Plan.” I agree five-point plans are a good concept, but…

Then re climate: Paraphrasing, “We need to boldly reclaim the environment, where Conservatives are leaders. Hunters, farmers, anglers, etc are traditional conservatives.” I’d agree, but then he went all liberal on us: “We cannot ignore the reality of climate change, the debate is over.” Sounds like the old “Science is settled, debate is over” rhetoric used by the radical leftists everywhere. “We lost twice opposing a carbon tax. We can’t be defined as climate change deniers.” He seems to be saying if we can’t beat ’em, join ’em, or alternatively, if we want voters to like us, we need to be like the libbies and embrace the liberal-left policies that the trendies love.

What happened to “not using the same old arguments, being bold, and being courageous?” This is the opposite of that.

More about that: In a later Q&A session, O’Toole was asked, “Yes or no, will you scrap the carbon tax?”

O’Toole answered (paraphrasing again): “Yes” —and said he would instead institute a “serious climate change plan, that gets emissions down, particularly with large emitters, in partnership with provinces — that doesn’t foist attacks on them — and supports the resource sector, getting Canadians back to work, in all sectors, in all regions… with a serious plan, to also get emissions down.” So he will end the carbon tax and replace it with… “a serious plan.” Which sounds like double-speak from another slimy politician. A politician who is hiding an agenda. Or is trying to do the same thing as we tried in the past two elections in which we lost.

On a question asking about “his message to social conservatives,” O’Toole fumbled and scrambled. He began by saying that the Conservative Party is a big blue tent (yawn, that again?) and that Conservative Party welcomes all views, not just as the Liberals do with their dictatorial leader telling his members what to say and how to vote (on, say, abortion — which O’Toole can’t really touch because he agrees with them on abortion!).

But then he fouled up. (1.) He used, as his prime example, the recent parliamentary vote on the motion to recognize China’s genocide, where, he told us, “every Liberal voted with the Conservative motion, but Mr. Trudeau didn’t even show up.” Now, I know he wants to make political hay about Trudeau failing to show up for that vote, and he should because the news media purposely fails to, but this example actually makes the point against the notion that the Liberals are dictatorial, policy-wise. It exemplifies that the Liberals actually do allow free votes. They voted with the Conservatives! The fact that Trudeau didn’t show up, indicating that maybe he wouldn’t have voted that way, is proof of that. So O’Toole shot himself in the foot on that one (is he even a gun owner?).

(2.) He continued, in answer to the question of his message to social conservatives, saying that he will get Canada’s economy back on track. Yeah, I know. Whaaat??

And that was that. Meaning, in other words, he completely failed to answer the question for social conservatives — a huge constituent of the Party — leaving them in the lurch once again. Hasn’t he even memorized a stock answer about it if only to placate social conservatives? He sounds exactly as unprepared and stupefied as Andrew Scheer in that regard. And as every other failed candidate. He has no solid answer, just another typical old smarmy politician non-answer. Some change!

So I go back to what I said near the beginning: It’s not that Conservatives need new arguments, or whatever, it’s that Conservatives aught to HAVE AN ARGUMENT. Have a policy or several of them — and make those policies bold, fresh, and truly useful. And, for God’s sake, make them conservative.

P.S. I could add several infinitesimal complaints. Here’s just two: (1) going back and forth between English and French, as he did, is just excruciating to me. I’d rather listen to Kamala Harris. I generally tune out, unless I absolutely have to stay tuned in. This time I stayed tuned in so I could write this blather about it, luckily for you, but 99.9% of the time I don’t. So there’s a free election tip for you, Conservatives.  (2) That idiotic wave to nobody but a camera at the very end. Who the hell scripted that? Job one is to not make the leader look foolish. FAIL.

Previous articleNot a vote-getter. Just a waste of cash.
Next articleMPs give themselves a nice fat raise. Because they’ve done so much darn good.