“Automatic” implies that the MPs, who gave themselves this pay raise, in fact had nothing at all to do with it. It’s all automatic, dude! We ain’t got nothin to do with it! We can’t stop it, it’s automatic!

Which is a lie, obviously, inasmuch as it was them who voted for it, and voted to make it automatic every year, so they could make spurious claims such as that.

I’m not sure how their pay ever got to be as high as it is now, to be “public servants.” Serving the public is something you should be paid for, but imagine the gall to step up and say you will “serve,” but then demand not just $13,000 per year, or $48,000 per year, or even $76,000 per year, but demanding and requiring us to pay you — get this job if you can get it — $182,000 per year! To be a “public servant.” When the servant gets paid more than those whom they are supposed to serve, can we please stop calling them “public servants?” And these days, and at these pay rates, who is serving whom, anyway?

Politicians, who used “Covid-19” (their PC code for the virus that came from China and which we would have called “China Virus 19” if we were sane) mandated that we close our schools, businesses, churches, end our travel and our normal social and leisure lives, and stay home with a freaking mask on, all continued to get their fat paychecks —and many continued to travel about, as we saw.

And now a raise? It’s not chump change either. It’s $3,200 for MPs, $4,700 for government ministers and the leader of the opposition, and $6,400 for the prime minister. Because the PM, especially, really, really deserves a raise. He now only gets way over a third of a million dollars per year, plus untold (literally untold) benefits and a golden pension (and on, and on).

As the Canadian Taxpayers’ Federation puts it in their newsletter today, “More than 700,000 private-sector jobs vanished over the last year. But federal politicians are still scheduled to get another raise this year. That’s because they are eligible for automatic raises, every single year on April 1, like some kind of bad joke at taxpayers’ expense.”

I’m not laughing. Nor am I a fool. And you shouldn’t be either. So do something!

They suggest we contact our MP and ask whether they support the pay raise they’re getting while hundreds of thousands of Canadians have lost their jobs. Seems like a small ask, and worthy of the tiny effort it requires, even at my pay grade. 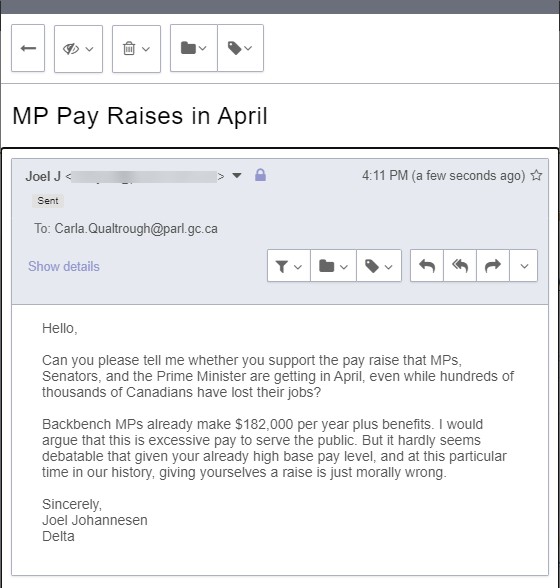