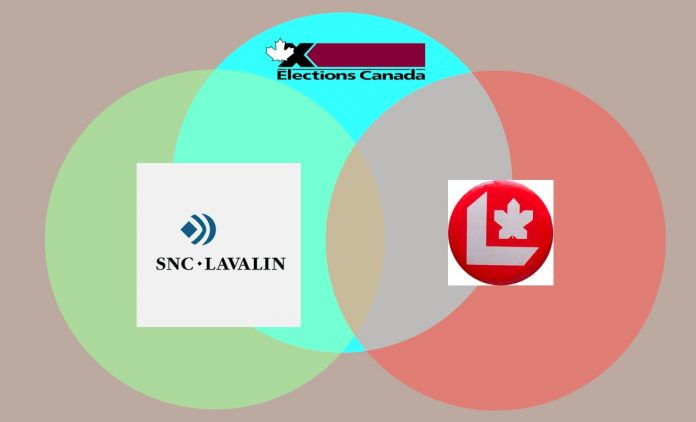 Some more icing on an already overloaded, gross, overbaked cake in the shape of the Liberal Party logo:

CBC reports:
…The illicit SNC-Lavalin operation [This is a different one — an illegal Liberal Party donation scheme!] went undetected for nearly a decade. Despite the evidence collected by investigators, the Commissioner of Canada Elections decided not to bring charges against the company…

But yeah no there’s no deep state, nope, not in Canada, and not in the USA. Don’t let your lying eyes deceive you. Reading or seeing stuff in the news indicating that there is a deep, and deeply liberal-left politically biased agenda-driven activist and sometimes radical-left civil service, and perceiving as it being in action, does not mean that it’s real. Two plus two can very well equal five, and if you don’t believe that, you’re a racist and homophobe and heck, a “denier” too, you Nazi worse-than-Hitler white supremacist deplorable, or whatever else we have to say to shut you down and ruin you. I’m just going by the example of Justin Trudeau and Hillary Clinton, et al, who stumble through that technique.

The list of names, compiled in 2016 by federal investigators probing political party donations and leaked to CBC’s The Fifth Estate and Radio-Canada’s Enquête, raises new questions about an agreement by the Commissioner of Canada Elections not to prosecute the company.

The federal Liberals were sent the list in a letter marked “confidential” from the Commissioner of Canada Elections — the investigative branch of Elections Canada — on Aug. 5, 2016. But for nearly three years, neither Elections Canada nor the Liberal Party shared that information publicly.

Weird. Neither Elections Canada nor the Liberal Party, you say. I mean we have been talking about the Trudeau/Liberals and SNC-Lavalin corruption scandal all this time. You’d think they’ both agree, let’s bring this up at this juncture since we promised “openness and transparency.” Well that and the sunny ways. It’s like they’re in cahoots. Kind of closed and “collusiony,” you might actually say.

The investigation reveals that over a period of more than five years between 2004 and 2009, 18 former SNC-Lavalin employees, directors and some spouses contributed nearly $110,000 to the federal Liberals, including to four party leadership campaigns and four riding associations in Quebec…

…Novak said that SNC-Lavalin actively encouraged company officials to make donations, and even collected the cheques to deliver to the Liberal Party…

Huh. Now that some of us are being open and transparent, it raises the really rather imperative question as to whether any other liberal-left-luvin big corporations (from what I can tell that’s all of them), big government unions or for that matter the media unions, or, say, any state-owned media organization, ever do anything like this. Nah. Just SNC-Lavalin. And like the Liberal Party itself, most of them aren’t abiding by the openness and transparency campaign promise.

… Most of the senior executives on the list contacted by CBC/Radio-Canada declined to be interviewed.

So thank goodness for honest people…

But two non-executive SNC-Lavalin employees who agreed to speak with The Fifth Estate/Enquête about the scheme said they were definitely told their political donations would be reimbursed in the form of bonuses from SNC-Lavalin.

One of those was Jean Lefebvre, who worked for the firm as an engineer. Contacted at his home in Saint-Bruno, Que., Lefebvre said he was specifically asked to donate to the Liberal Party.

“We were given a bonus that was double the amount donated,” he said.

Let’s zero-in on the practices of Elections Canada or the Commissioner, who decided not to prosecute Liberal Party candidates or executives nor even SNC-Lavalin — deciding instead to offer a sweetheart deal — the “compliance agreement” (familiar, right?), in which they merely had to promise not to break the law like a normal Canadian. They all got off scot free, despite the evidence. Seems not just wrong, but Jussie Smollett wrong.

Hey maybe the civil servants and the media only care when conservatives do stuff. Let’s check!

Conservative MP Dean DelMastro, back in 2014 or so, after being charged with a lesser election-related offence, was forced before the liberal media — in handcuffs yet — to do a well-publicised perp walk so all the media — the CBC, CTV, Globe and Mail, etc, who were all amazingly at the ready at the exact right time — could snap as many pictures as possible of The Conservative in handcuffs who did a bad thing.

DelMastro went to jail! Seriously. The liberals’ Maclean’s division wrote in 2017, “Del Mastro is now waiting in the chow line with other inmates, likely at the Central East Correctional Centre in Lindsay, Ont., a testament to the fact that Canada is a nation of laws, and the powerful, if they are sufficiently dim-witted or bull-headed, can be made to pay for their crimes.”

The DelMastro matter was a big mistake on his part, to be sure, and he was convicted, but from what I can tell it was nothing over what the Liberals and SNC-Lavalin apparently conspired, over years, to do, and are possibly still doing; and what others might possibly have done and are still doing. If only the authorities and investigative journalists would pretend they were conservatives!

And here’s a little ice cream with the cake: SNC-Lavalin, beneficiary of kindness and a soft touch from the government’s seemingly liberal-friendly criminal prosecutors, and beneficiary of innumerable government contracts worth countless billions of taxpayer dollars, does some liberal-style accounting for their liberal donations:

He explained that the size of the bonus was intended to compensate him for the taxes he would have to pay on the bonus.

Previous articleWomen’s podcasts are sometimes annoying? And here’s why? It’s cuz of racism and hatred of women?
Next articleProgressive Sex Word Salad With a Cup of OK Dressing