Progressive Sex Word Salad With a Cup of OK Dressing

Oh thank God we and our children finally have a read on how Kristen Stewart feels about sex and “gender fluidity” and other stuff we used to consider to be pretty adult private and personal thoughts which we didn’t ever need to say out loud or read about or talk about and life went on just fine. By the way who is Kristen Stewart?

“So much of that spirit is completely about finding new – finding a new language. And like really understanding that your word house, so to speak, is constructed by you,” she said. “And you can also have a million definitions of any word you want. Like they are open for interpretation. … So like words as solace – because they really can be used as weapons or really like more saviours.”

That’s Kristen Stewart saying stuff which you now wish you didn’t read. She’s an actor and someone whom the Globe and Mail thinks offers us and our children valuable insight into sex and her sexy thoughts. And they think it’s important for us to talk about what people personally think about sex and how they like to perform their sexual routines and what stimulates them sexually. Because Venezuela shmenezuela.

Or maybe she’s thinking the correct way about sex and “gender,” and that’s why it’s important to feature it for their readers, you know, to “educate” them as to the right way to think. That may be why they published this story along with five others, today which advance the same sort of narrative, all featured on their online “front” page.

I can call Kristen Stewart an actor instead of actress, by the way, because as I’ve read, she has decided that God shmod, science shmience, there is no need for “sexual identities.” This is the trendy talk du jour, in case you aren’t cool like me and Globe and Mail and all science-luvin, evidence-based progressives and the “woke” set. Like there’s no men, and there’s no women, it’s just like, “let’s just be, uhkayee?” She believes in gender and sexual “fluidity.” Or fluid something. I don’t know that science I have no idea and I don’t want to know.

This “news” story — an Associated Press story — was posted on the Globe and Mail’s web page in the “More top stories” section. Right after the big main headlines of the day. Yeah this is a “top story” to someone. 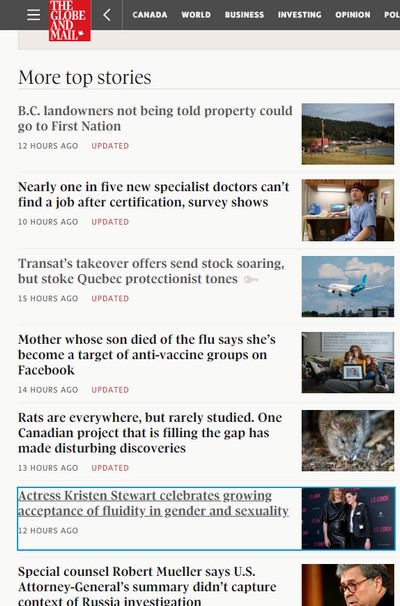 Below that section, in their “Video” section, there this sexy gem: “Actress Sophie Turner: There’s no need to label sexuality.” In it, she uses the word “like” so many times I lost track, and between all the iterations of the word “like”, manages to get out this juicy albeit utterly private and personal bit of bisexual proclivity of hers: “I love who I love, and that’s OK.”

Anytime one of the elites of the big thinking set ends one of their clearly progressive proclamations with the terse instruction, “and that’s OK,” as if seeing the need to self-validate their own nonsense because nobody else including you would, you know what they just said must be more progressive bullcrap. Actually you didn’t need to wait until the “and that’s OK” part, but let’s use it as a confirmation tool. By the way, here’s how it was presented on the Globe and Mail’s web page — right below another missive on “Canada’s far right,” because that’s a thing (exclusively to the leftist “word house” builders). 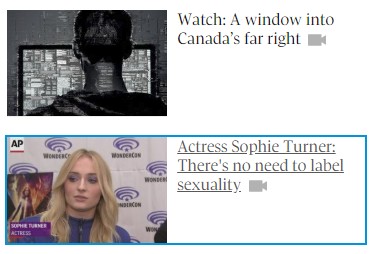 So back to the top of their page. What are the aforementioned big main headline news stories of the day? Among them are four more articles on the “fluid” sexuality topic. Two discuss a person, shall we say, who has testicles, but competes as an athlete in women’s running events, and wins every time. One is about a person competing as a woman but who was born a male. Another, an opinion piece by former speed-walker Ann Peel, is more generally about women who are men, or men who are women, or how men are paternalistic and misogynists and racists, or some total crap like that. 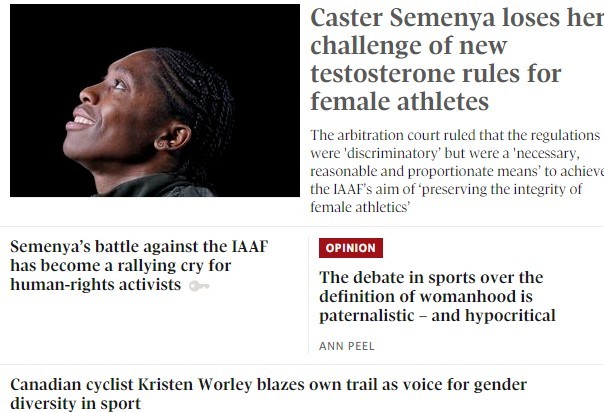 The Globe and Mail does appear to be running with some sort of agenda here. And that’s OK. Err I mean it’s not OK if you went there with your kids wanting reports of the news without feeling like you were being pushed in one weird direction like some sort of a left-wing, progressive trendy “sexual fluidity” word-salad publication might do. But who’s to say what’s OK when there are no journalism rules anymore, and no life rules, and “like really understanding that your word house, so to speak, is constructed by you. And you can also have a million definitions of any word you want. Like they are open for interpretation?”

The piece by Ann Peel, includes this thought (my bolding):

“The constant here is that women are already marginalized in sport, and now the more marginalized women – those of colour and who are transgender – are even more vulnerable. Under the guise of protection, sport is effectively declaring open season on the body of the female athlete. We cannot pretend that this is okay.”

So you see, sometimes that is OK, and sometimes that is not okay. Actually if you’re like me, you can and always could identify both biological sexes, and on a personal level, exactly what we think is, and what is not, OK. But thanks for trying to womansplain it to us.

Previous article
“Openness and transparency,” liberal style.
Next article
Imagine If The Media Praised You For Being A Racist Idiot