I listened to Barack Obama’s speech this morning, on his “plans” to fix America’s economic crisis.  It turns out that once again, they are pseudo plans.  Quasi plans.  Well written and genuinely well-spoken prose.  Pablum.  Bromides.  In detail and substance, the speech was once again about as vacuous as all his other campaign speeches, in fact this one sounding even more than usual like he’s still on that wordy, theatrical Obama campaign trail.  The trouble is, he’s now but a heartbeat away from assuming The Office.  The time for rhetoric is over. 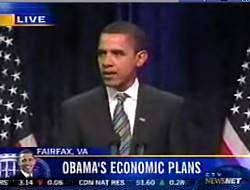 Once again, his blathering left out any salient details which might get in the way of making even the slightest sense of anything he’s saying;  except for the one constant Obamanomic thing:  government is the savior of all. Only massive government spending on programs created by and managed by government on multi-year central planning committee plans, he left no doubt, can save America.  (And of course on that he couldn’t be more wrong.)

But read this passage, which I transcribed just now from my tape:

“We can restore opportunity and prosperity.  We should never forget that our workers are still more productive than any on Earth.  Our universities are still the envy of the world.  We are still home to the most brilliant minds, the most creative entrepreneurs, and the most advanced technology and innovation that history has ever known.  And we are still the nation that has overcome great fears and improbable odds.”

So, to put it another way, was he saying that, oh, I don’t know, America’s economic fundamentals are strong?  Or to put it yet another way, are things exactly, precisely, almost word-for-word the way John McCain said it during the election campaign, which Obama and his liberal media swoon goons universally bashed as ridiculous and worthy of repeated mocking and moreover, which apparently gave license for the liberal media to cast him as an unelectable idiot with his head in the sand and as one who is out of touch with reality or who is perhaps even clinically insane?  And, for that matter, are those words not almost identical to what Prime Minister Harper and his cabinet said during our own election, which were similarly ridiculed by liberals and the even further leftists in politics and the media?

Here’s the one sentence John McCain uttered even before we knew the extent of the problems, which got that ball rolling during the campaign, and arguably cost the Republicans the win: “Our economy, I think, is still—the fundamentals of our economy are strong, but these are very, very difficult times.’‘

And here’s what he said after the attacks from the left started: “And my opponents may disagree, but those fundamentals—the American worker and their innovation, their entrepreneurship, the small business, those are the fundamentals of America, and I think they’re strong.”

Huh. Sounds familiar. It’s like Obama plagiarized McCain’s own off-the-cuff remarks of the campaign trail, in his big pre-presidential address to the nation this morning —a speech which was designed to please and placate America.  And from all media accounts, placate and appease he did.  Not one media report that I’ve heard or looked for this morning has questioned Obama’s words regarding these new-found strong fundamentals, choosing instead to assume the usual liberal media position: puckering up all their orifices, blowing kisses and sucking up in awe of his daunting task and iconic words.

Here are Barack Obama’s own words in one of his many variations on his rebuttal theme to McCain’s words at the time (September 2008), which he repeated over and over during the campaign and all liberals and all the media repeated (and aped here by our Liberals and NDP and their media during our own campaign):

“I just think he doesn’t know. He doesn’t get what’s happening between the mountain in Sedona where he lives and the corridors of Washington where he works…. Why else would he say, today, of all days—just a few hours ago—that the fundamentals of the economy are still strong? Senator—what economy are you talking about?”

Here is an example of some of the mocking McCain received by the darling of the CBC, the far-left Huffington Post web site, on September 15 2008:

John McCain may want to refine his economic message a bit more during this potentially disastrous week for the financial sector.

On the campaign trail in Jacksonville, Florida, the Senator declared this morning that “the fundamentals of our economy are strong,” despite what he described as “tremendous turmoil in our financial markets and Wall Street.”

The line may seem like GOP boilerplate, save for the fact that this morning, the McCain campaign released a television ad that began: “Our economy is in crisis.” Moreover, with financial and job markets in disarray, and with Lehman Brothers, the troubled investment bank, filing for bankruptcy, it may not be the wisest political message to tell voters that the fundamentals are a-okay.

“You know,” said McCain, “there’s been tremendous turmoil in our financial markets and Wall Street and it is—people are frightened by these events. Our economy, I think, still the fundamentals of our economy are strong. But these are very, very difficult time. And I promise you, we will never put America in this position again. We will clean up Wall Street. We will reform government.”

Information not included in most Obama speeches:

Do not trust liberals or their mainstream media division.