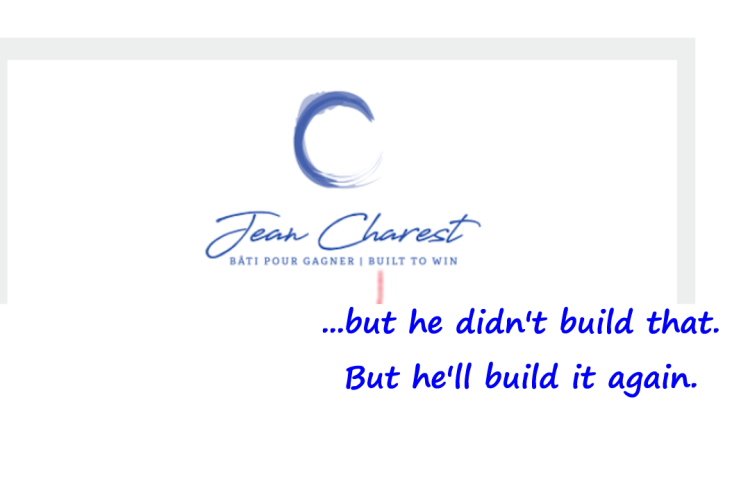 Jean Charest seemed to sort of be channeling Barack Obama today in his email marketing, though I’m sure he didn’t know he built that comparison as he wrote it.

The infamous Obama Big Government Paves Ye Way conceit was pooped out during the 2012 election campaign. The great community organizer turned oracle proclaimed that successful people and business people had pretty much nothing to do with their success, or with building their own business. Not hard work, skill, effort, family struggle, sacrifice, no, nothing like that. Dumb luck, but moreover, the benevolent GOVERNMENT, actually provided the path to their ever-so easy-to-come-by success. “If you got a business, you didn’t build that. Somebody else made that happen!”

At least Obama didn’t take personal credit for building other people’s businesses or their success. Like Charest did today. Charest’s claim is funnier though because I can’t even imagine him in anything but a large wool cardigan and a large blue jacket, large slacks, and loafers, or possibly wearing fluffy slippers (all Fabrique En Chine, duh). But in fact he claims he built the pipelines. And by golly, he’ll do it again.

We have the oil and gas resources, but the Trudeau Government is preventing us from getting it to our customers.

I’ve had ENOUGH with the empty promises.

I’m the only candidate who has built pipelines. I’ll build them again. …

Let us review: You “built pipelines?” As Consuela would say, no, no, no.

A whole lot of workers who toiled to build those pipelines, and the investors who paid for them and paid the workers… may have some questions for ya. Also, Conservative Party voters may have a query er two.

I’m sure Charest lifted his blubbery arm to sign one of the 18,000 Big Government regulatory documents needed to allow it to happen 24 years after the investors wanted it to happen, but he didn’t lift an actual shovel.

I can’t even imagine Jean Charest at a workplace other than one filled with polished tables with doilies on them and comfy leather chairs, possibly with some nice hot tea and biscuits handy. Wrangling two-ton sections of pipeline being placed across the northern Alberta tundra (I can’t even imagine him outside of Ottawa) or, you know, him being in any dirt whatsoever, sounds unpossible. Muh shoes is dirrrrrty!

The Take-Away: Big Government hacks don’t know what the hell is going on and who is building what, even though they think they’re building everything. They aren’t building a damned thing — quite the opposite. Consuela builds more.

Load more
Previous articleNews flash: reporter informs us about right-wing people being on social media. Thanks for the warning, reporter!
Next articleCBC “News” runs defense for Trudeau Libs. They really do think it’s their role.