News flash: reporter informs us about right-wing people being on social media. Thanks for the warning, reporter! 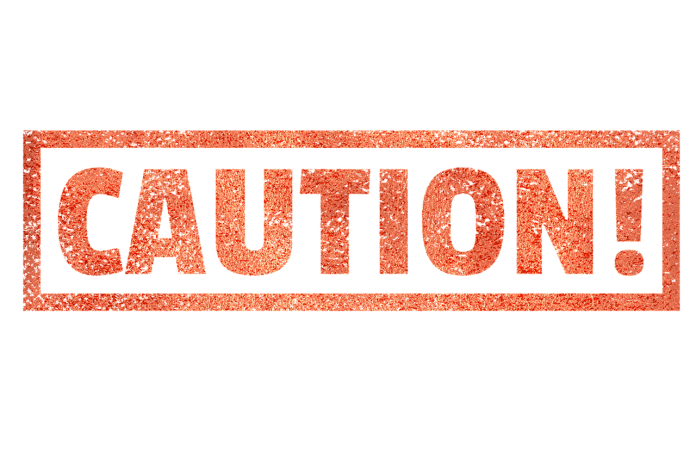 This is really just an update to my post from yesterday, so you should read that first. It’s short. And free!

UPDATE April 14, 2022
I wrote yesterday that the Globe and Mail reporter would write up a “news” article… well here’s what I wrote: “…I’m afraid he’s busy writing his article decrying Rumble as a “Putin-loving” “far-right-wing” “misinformation” platform dominated by “fringe” “extremists…””

I wasn’t wrong. Specifically, he hit “Putin,” “right-wing,” “misinformation,” “fringe,” and more. Joe Castaldo (he’s the one demanding a response from Rumble, this week, as to why Rumble isn’t being just like restrictive lefty Youtube in their censoring of conservatives and those with heterodox viewpoints), ran what I could only describe as a BS hit piece on Rumble using formulaic left-wing sources and bromides. Shock.

His target, as I suspected above, was not just “right-wing” folks who are described as “fringe” just as I predicted they would be, because the “reporter” (see what I did there?) seems to think it is a self-evident, universally accepted fact that they are deplorable people; but also Russia, a source of scorn that was going out of style since the left’s phony Trump/Russia collusion hoax was exposed, but now back of course because there are actual Russian atrocities in Ukraine — and every effort now has to be made to directly connect Canadian and American conservatives with that Russian/Putin atrocity, somehow, no matter how ludicrous. “Conspiracy theorists” is merely added for good measure I think. Projection, perhaps.

“Starting in 2020, it quickly developed a following with U.S. right-wing politicians and commentators who felt that YouTube’s content moderation policies were biased against conservatives and too restrictive,” Castaldo writes as if it’s noteworthy merely that people on the right are attracted to a platform; whereas it’s utterly unremarkable to him — certainly not worth mentioning in his “news” report — how people on the left completely dominate nearly all mass media including control of social media like Youtube. Or he knows that full well but would prefer you didn’t know it. Or he knows you know this too, but it’s a damn con game designed to mislead the weak-minded. I think that’s it. (I would call this a form of “misinformation.” When I’m in a mood, I’d refer to it as “left-wing propaganda” and dangerous “gaslighting.” After a couple of beers, maybe I’d go with “complete BS reporting.”)

Castaldo — like all “news” media in Canada — reflexively appeals to the good old Canadian “news” media standby: an “expert” from a Canadian university. They are almost always perfectly reliable sources of “expert” wisdom appealing to progressives, juicy left-wing talking points and providers of select data, and the appearance of authoritative knowledge and good sense (especially when they have a white lab coat on).

His source for expertise here is not a conservative who has been booted off of social media for no reason, or one who lost thousands of followers mysteriously, but rather Ahmed Al-Rawi, an assistant professor at B.C.’s Simon Fraser University, who studies disinformation. (Ironic the reporter uses an expert in disinformation, no?) “Disinformation” or “misinformation” is a huge thing now — almost matching popularity with “gender and racialized trans intersectional womynx equity studies” — not just in the left’s Universities Division, but you’ve heard it from the Trudeau Liberals lately ad nauseam — and in actual new laws they hope to pass — because they’re freaked out about losing their ability to strictly control the narrative, the messaging, the information, by whatever draconian method they deem necessary. He instructs us thus: Rumble “relies on fringe groups who disseminate conspiracy theories and disinformation under the pretext of freedom of expression.”

As we know from Justin Trudeau and the Liberals, we must not allow fringe ideas, for they are, and I quote, “unacceptable ideas.” Pretext shmeetext. We must control the narrative!

Castaldo doesn’t mention anything about Canadian universities being utterly replete with left-wing adherents and outright ideologues and with woke cult members, nor the fact that they are really, objectively speaking, centers of left-wing indoctrination; and virtually no — zero — “right-wing” folks he is so afraid of work at any of them. This lack of right-wingers also goes unmentioned. All of that is not worth mentioning. But there are “right-wing politicians” at Rumble! He left out the word “WARNING!” but it’s practically implied.

This article is like half of what you read today in the legacy left media. A gratuitous attack on the right and on any platforms that might be making headway amongst the right, and thus on the right’s ability to engage in messaging of their own, uncensored — because all of that risks going against the left’s narrative and messaging. That’s their primary concern these days. Without their strict control over the message and each medium, as they have had, they lose. Hunter Biden stories, Trudeau/Liberal agenda analysis, the truth about this and that COVID-19 measure, exposures of all the lies we’ve been told in politics and the “news” media, all the corruption, the perfidy, all of these risks being exposed. What’s more, good conservative ideas or heterodox ideas or non-approved ideas may risk being given sunlight. The horrors.

And they know it. And they are freaked out. Look no further than the left’s massive dump of brainpoo today after Elon Musk officially moved this morning to take over 100% of Twitter for $41 billion. They’re concerned because Musk promises to allow free speech. Re-read that. And as we’ve seen from the Globe and Mail’s reporter, an explanation must be provided to the gatekeepers for such heresy. Here’s just one blue-check journalist’s reaction (he’s also an associate professor —with 176,000 followers so apparently hasn’t mysteriously lost thousands of followers as I have without explanation), invoking Hitler not hours after Musk’s announcement: 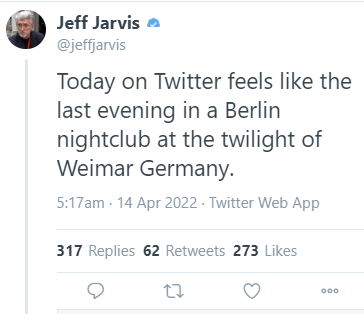 And this one from a blue-check star from the left’s Washington Post division (owned by Jeff Bezos!): 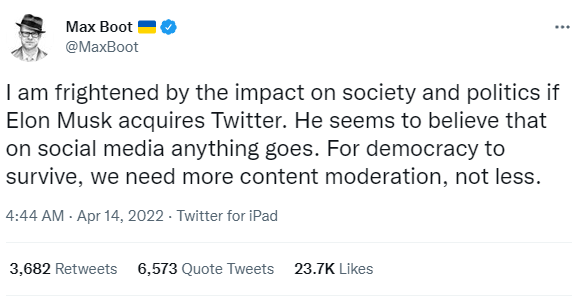 He went on, after that post got massively ratioed because it was idiotic and fascist, to call anyone who disagreed with him “Trumpist trolls.” Because of course he did.

Andy Ngo captured a few of the freedom-hating blue-checks: 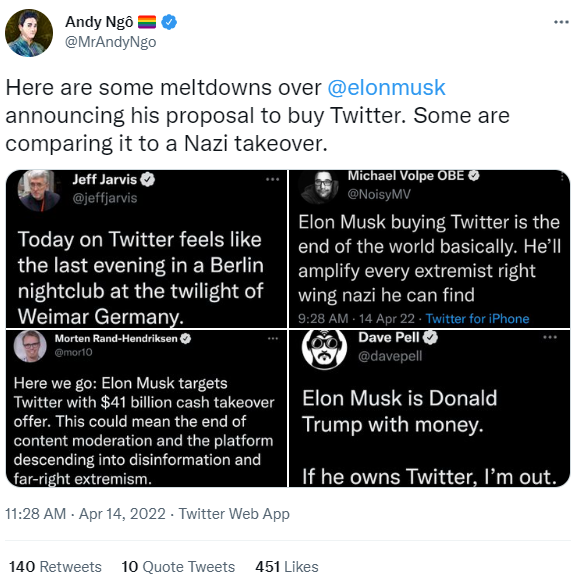