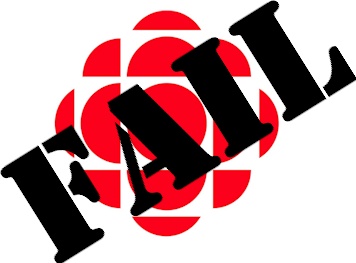 I’ve shown you the latest ratings charts, based on actual TV ratings, for about twenty years here at PTBC. It always looks roughly the same insofar as its obvious lack of viewership of the state-owned CBC.

I do this why? To prove (over and over, apparently) that nobody — and this is called science, for those of you who purport to, and I quote, “follow the science” — and I mean virtually nobody, watches the state-owned and taxpayer-funded CBC.

But that is not even the main reason it needs to be eliminated (sold, closed, abandoned, squished like a bug — I don’t care). No, the main reason is that it is state-owned, and as a simple but extremely important matter of principle (a set of ideals which includes freedom, democracy, free markets, efficiency, and a whole host of other vital things), it has no place in a free and democratic country. The government, as a matter of principle, should not compete against its own citizens, as it is most assuredly doing here.

The state-owned CBC’s leftist and sometimes hideously far-leftist (and yes, it’s very much “systemic” —ha!) political and cultural bias and bent is simply an objective reality. But that, too, is among the least of its many problems, and yet that one is (also) huge, in and of itself.

So here, once again, is some science, since liberals and leftists pretend to be compelled to “follow the science”: the state-owned CBC doesn’t appear in the Top-30 TV shows in this latest chart (or in most any other chart over the years) except once —as it often does for a hockey game or some such nonsense having nothing to do with a need for “government” ownership or intervention in the marketplace. This time they place 21st for their replays of a well-worn (worn-out?), very old, very BRITISH (which means not Canadian!) show, “Coronation Street.” 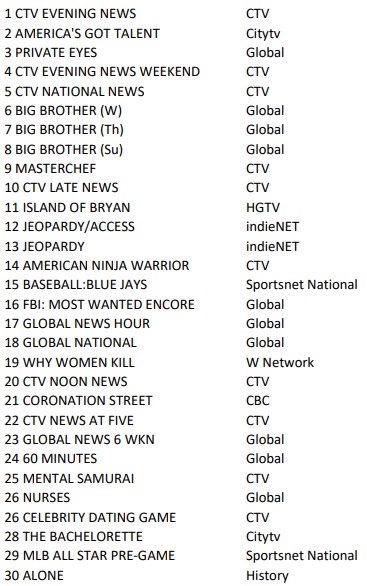 And for you CBC lovers (all nine of you), no, the Olympics coverage, which the CBC bought with your tax dollars by outbidding the privately-owned networks who were using their own cash, isn’t going to save their Canadian ratings bacon. No, Olympics ratings in the U.S. (NBC) are way down (Fox News headline: “‘Woke’ athletes, poor performances blamed as NBC’s Olympics ratings tank, spooking advertisers”) and you can be sure they are here too.

And the state-owned CBC isn’t even doing a good job trying to cover this idiocy of government ineptitude called the Olympics (which should be called the World Government Games ‘n Protest Fest if they’re remotely honest). Even the liberals’ Globe and Mail division’s TV-watcher-in-chief (or Fox-News-hater-in-chief, depending on the day), John Doyle, is dissing their beloved CBC’s coverage.