No Trudeau should not resign yet. On account of I’m not a hypocrite. 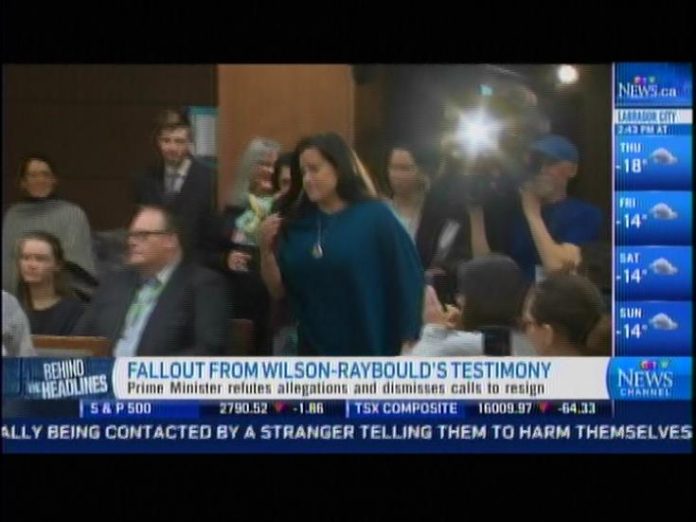 Yeah I actually do believe Jody Wilson-Raybould, but that, alone, is not “justice served.” Nor was it when leftist hacks in media and outside media were convicting Judge Kavanaugh based on their fake, politically-tinged charges of gang rape. And not ironically, justice is what at least half of this Liberal scandal is about. So calls by Conservative leader Andrew Scheer and some others for Justin Trudeau to resign are premature at best, and hypocritical — maybe even dangerous — at worst.

The ugly stain left by leftist idiots and their media by their public conviction of unknown but obviously totally for real “MAGA-hat-wearing white boys” who supposedly tried to “lynch” Jussie Smollett, the innocent Covington school boys, and before that, the upstanding Judge Kavanaugh, are barely even set — and here we are now going in reverse. This is hypocrisy on pot. How many more examples do we need of those who were nefariously accused and convicted by left-wing political hacks before the right figures this out and grasps the available credibility and integrity on offer?

Yes this Liberal scandal is a far better case than any of the left’s hack jobs. Trudeau has been accused credibly, and with corroboration, and it’s all completely believable. One major Liberal hack has resigned already. But the basic premise being used by some to convict Justin Trudeau is exactly what conservatives railed against just over these past few months. Even some liberals are on board the “I believe her” train. They’re wrong, but it at least proves that they’re not hypocrites. Here’s the Globe and Mail’s liberal columnist John Ibbitson today:

Justin Trudeau should ask the Governor-General to dissolve Parliament immediately, with a general election to follow in April. … A prime minister who has been accused of such abuses by his own former attorney-general should no longer have the confidence of the House of Commons. This government should fall. … Ms. Wilson-Raybould’s testimony Wednesday was so utterly damning that the Liberals no longer have a moral mandate to govern.

I will allow that MPs have the right to have a vote of non-confidence, causing the government to fall. That’s confidence — which is different than asking for a resignation and fall of government, based on an untried allegation, as serious as it is. (Being accused of serial gang rape in Supreme Court confirmation hearings is also serious).

I have no doubt in my mind about Wilson-Raybould’s testimony. There a few examples in life of a more liberal Liberal than Jody Wilson-Raybould, nor are there many examples of a bigger fan of Justin Trudeau. There are still fewer examples of liberal politicians acting with such integrity, and with such clarity of thought. For her to choose to tell the truth knowing it would wreck her beloved Liberal Party and her beloved feminist leader in this way gives her some obvious credibility.

That aside, and this is an aside, I’m not a huge fan of Wilson-Raybould. Her “accomplishments” while in the job included some of the most stupid, retrograde, (and notably liberal Liberal) changes in Canadian laws and culture: encouraging assisted suicides, and encouraging our youth (and everyone else) to get high on pot. Her habit of calling her current testimony “her truth” is annoying, if trivial. Less trivially, this “her truth” idiom speaks to her overt liberalism with its inherent moral relativism. A justice minister and attorney general should know the importance of there being one truth, not two sides’ equally truthy truths. As Andrew Coyne put it today, “Either she is flat out lying about the whole business, or the prime minister and his people are.”

Alas, the far-leftist NDP leader alone had this right, calling only for an inquiry, which he said may very well lead to Trudeau’s resignation, forced or not. Jagmeet Singh may be but a naive socialist, but he’s right on this. (Possibly a niggling point: maybe he’s just acting mindlessly, as he called for a public inquiry weeks ago — long before this damning testimony was provided. The far left are always calling for public inquiries. It’s a reflexive move used by them in nearly any situation in which they think they might make political hay. The damning testimony of yesterday seemed not to advance his position one iota.)

Whatever inquiry takes place would run well past the next federal election, unfortunately for Conservatives and Canadians, but that’s life. Perhaps that’s the “justification” for Scheer calling for Trudeau’s immediate resignation rather than what would be a long, drawn-out inquiry. But you can’t harness your politically expedient goals by bending justice to serve your political ends. If we haven’t learned that through all of this, we’ve learned nothing.

Singh is calling for justice first. Scheer is not. While Scheer can and should say “I believe her,” it should quickly be followed by “And I’m not a hypocrite.”