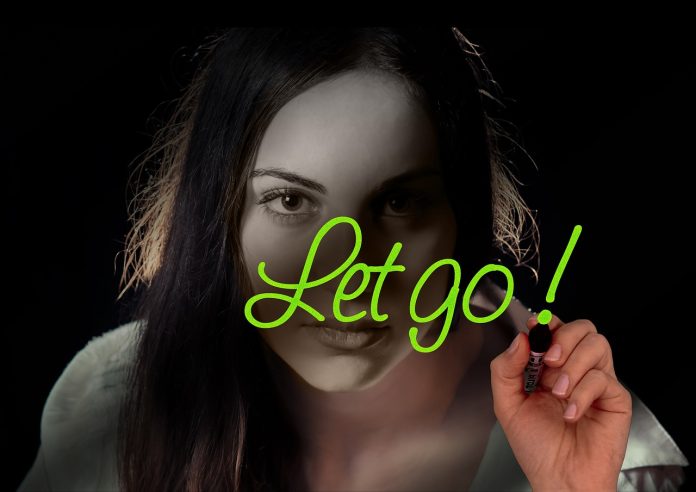 Readers who aren’t stupid — ie those who read PTBC on a regular basis — will get the rationale behind using the feature graphic above. And now let’s let go! Or something.

HOW TO BE STUPID

Mostly it’s good because it’s so astounding how much traveling around Justin Trudeau does, and mostly, it seems, just to do ribbon-cuttings and attend total waste-of-time meetings (OK that is a bit subjective, but I’ll stick with it because it’s totally solid and spot-on, and definitely not stupid).

Take this morning’s flight as a prime example of stupidity and hypocrisy, to say nothing of political ineptitude or tone-deafness: It’s a (jet) return trip from Ottawa to London Ontario, for the purpose of attending a ribbon-cutting… at an electric car plant (a multi-billion-dollar American corporation’s electric car plant, no less), at which Trudeau praised the virtue of saving the planet from evil CO2 emissions (etc, yadda, yawn, shut up).

Apparently, no IRONY alerts went off amongst the crack Team Trudeau nor any guilt amongst them about the scads of pollution they caused by jetting over there, nor about the copious CO2 emissions they gratuitously blew, um (see if I get this right), DIRECTLY INTO our CHILDREN’s lungs which will definitely KILL THEM and THEIR GRANDMOTHERS and ESPECIALLY the BIPOC (etc, yadda, yawn, “how DARE you,” shut up).

Note that the account tweets usually include stats on the amount of fuel burned, its cost (to taxpayers!), and the tonnage of CO2 emissions (emitted directly into the lungs of the CHILDREN…).  But in this case, DOUBLE the amount listed here because (thus far anyway) they have only tracked the one-way trip to London, Ontario, but not back to Ottawa. Unfortunately, he did go back to Ottawa. 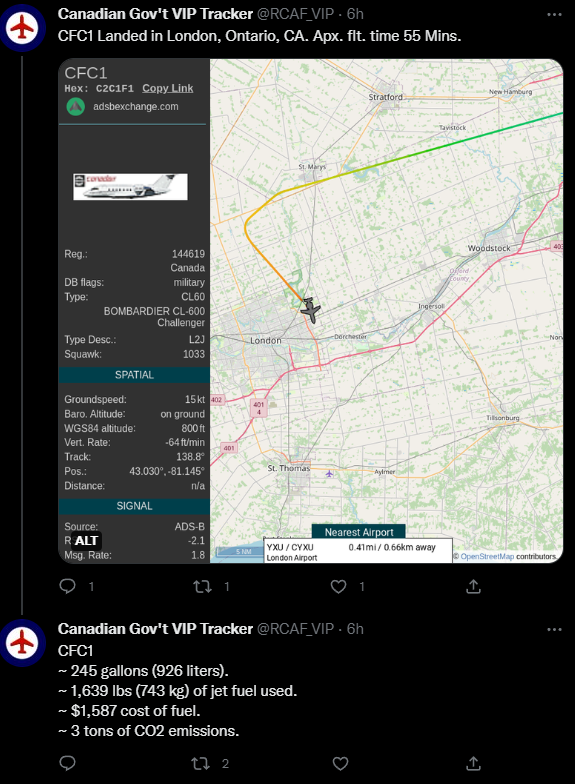 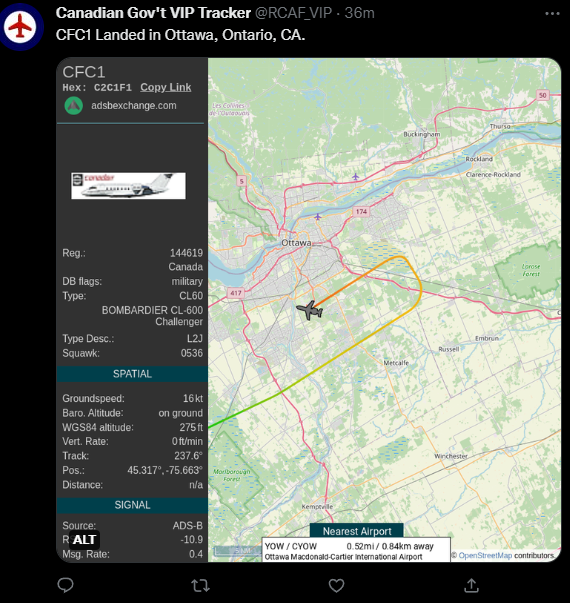 I mean come on. No irony here? (And the feds have no access to Zoom?) Right smack dab in the middle of what they repeatedly call a “climate emergency” and a “climate crisis?” It’s not mere irony, it’s blatant dishonesty and hideous hypocrisy, too.

And this, my friends, is how to be stupid.

Justin Trudeau’s Globe and Mail division paid a polling firm to do a poll. Right away we have a problem. But that problem is exacerbated (no, liberals, exacerbated is not some cool new sex move) by the fact that it apparently was designed to confirm their priors, as it were. Because who cares what the mob thinks?

As if to prove that many in the Canadian “news” media were in bed together working as activists exacerbating together (ha!), not only was the Globe and Mail excited about their survey magically confirming their priors, but liberalvision CTV was also very excited about the Globe and Mail’s work. It’s very unusual for me to see a “competing” “news” network happily or excitedly chirping about others’ work. CTV reporter Rachel Aiello helpfully added context to bolster the work of her erstwhile competitor: 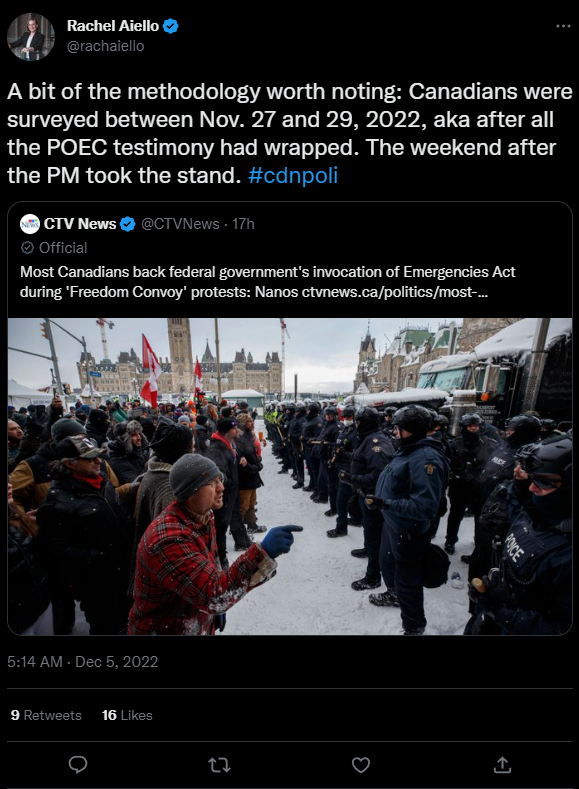 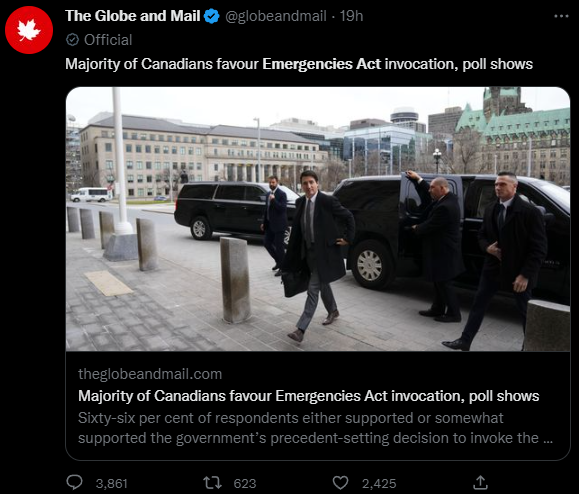 I’m completely SHOCKED. Shocked, I tell you, that a left-leaning “news” media organization would use their money (including, we can presume by our crafty use of logic, federal taxpayer money, since they are subsidized thanks to the benevolent Justin Trudeau and millions of our tax dollars to subsidize the ever-so needy “news” media), would commission a poll which gets them this result favorable to Trudeau. The “news” coverage of the freedom convoy was super duper fair and balanced, and did not lead even one Canadian astray, nor did they spread disinformation aplenty or on purpose. That’s for sure. So it’s super shocking to see such a result. Even if Canadians vasty distrust the media — it’s all they got and all they hear or see, so what are ya gonna do, stupid?

Anyway, even if Trudeau’s Globe and Mail division did pay them, I’m sure the poll was conducted honestly, polling a vast broad cross-section of Canadians including rural and suburban Canadians and not just liberals from downtown Ottawa, the questions were perfect, and everything’s totally normal, as usual in Canada today.

Just as I’m sure that when the popular Canadian lawyer Viva Frei does a poll on Twitter, the numbers are perfectly acceptable too — for his purposes. 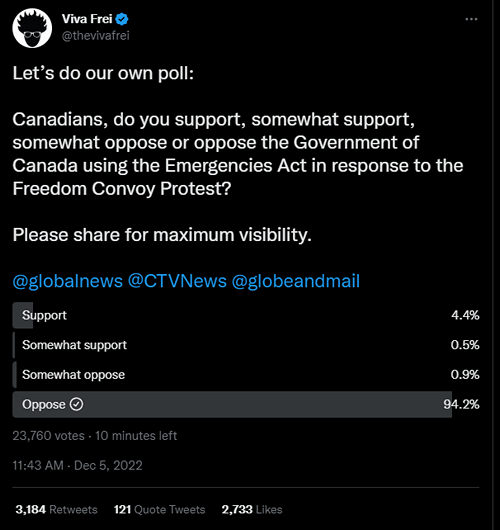 Viva Frei’s poll has seven times [UPDATED Dec 6 – now twenty times] the respondents as Trudeau’s Globe and Mail’s bought-and-paid-for poll, but sure, if you’re suspicious about Viva Frei’s poll or about those who responded, and you think it might be slanted or biased (or RUSSIAN!!!), I understand. You can rule it invalid or stupid. That’s what I did with the Globe and Mail’s. Based on my priors. And I’m not stupid.

Speaking of stupid, this takes the stupid cake: some really stupidly good editing in this video. A video of, well, just perfectly good normal people, y’all!

This is the best cut-up of a stupid event I’ve seen in ages. This is not, as you might imagine as you watch it, a bunch of stupid social justice warrior kids from U.Woke, all nattering about how they’re victims of white men, and capitalism, and whatever else they can think of. “Haters,” is mostly what they’re on about here. These are grown-ass people!: one is a journalism head at Carleton University, another, Rachel Gilmore is a Global News reporter who apparently does Tik Toks because she’s so grown up, another one, Erica Ifill, is a columnist at Hill Times, and Trudeau Liberal Public Saftey Minister Marco Mendicino is also there because he time for this super important stuff which isn’t driving an agenda.

Click the pic to see the vid in a new tab. 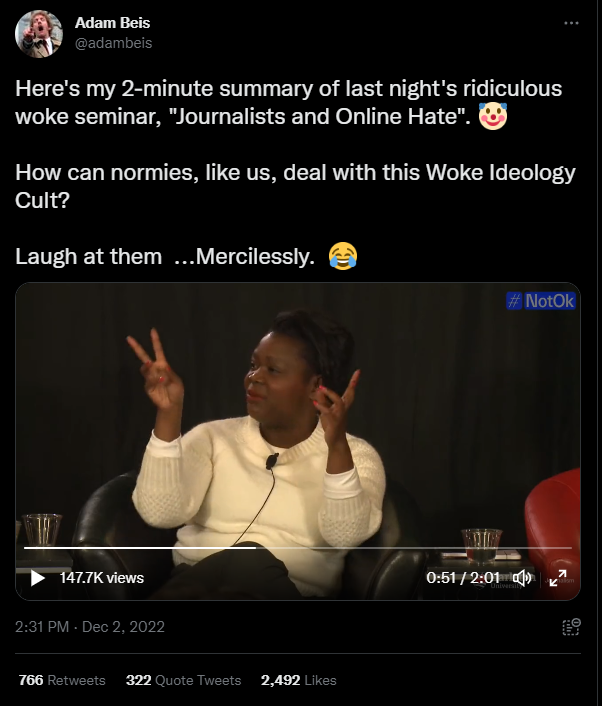 I wish Adam would do one of Justin Trudeau and his various cabinet ministers testifying at the Emergencies Act commission of inquiry. That wouldn’t be a stupid idea.

How stupid is Netflix?

It took about three seconds for the Twittersphere and the Interneteratti to spot the fake photo used by the fakers Harry and Meghan. 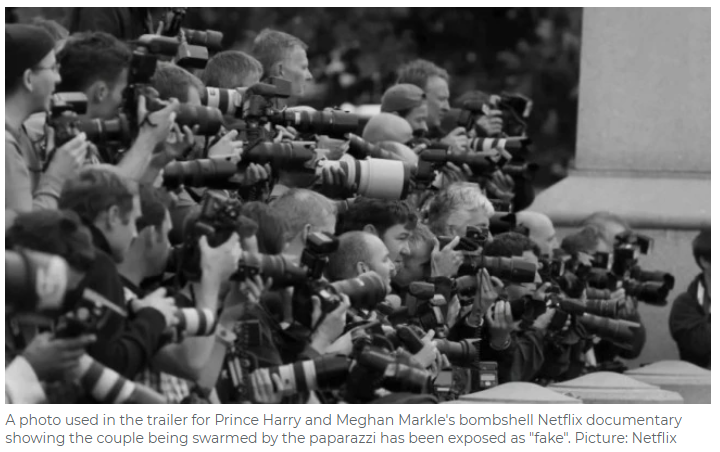 A photo used in the trailer for Prince Harry and Meghan Markle’s bombshell Netflix documentary showing the couple being swarmed by the paparazzi has been exposed as “fake”.

The Sun revealed the promotional snap, which showed dozens of cameramen packed together, was actually taken at a Harry Potter premiere in London long before the couple had even met.

…The streaming giant used the image in the promo for the new series before the Duke of Sussex said “I had to do everything I could to protect my family” in a voice-over.

We canceled our Netflix months ago, so mercifully we aren’t going to be subjected to even the trailer — or any of their other such stupidity.

The Munk Debates. They are not stupid. But famous conservative Brit Douglas Murray certainly made the Canadian mainstream media look stupid. In a debate about whether or not the mainstream media is to be trusted, the audience, which was fairly evenly divided at the start, voted in the end in the most overwhelming vote margin in Munk history that no, it is not to be trusted. 67%.

Watch this video starting at about the 22-minute mark, where Douglas Murray begins showing both that he is not stupid, and that the Canadian mainstream media most certainly is, to which most people in the audience agreed in their poll. 67%. Ahem.

Other than that, everything is stupid.