Enlarge it to full-screen if you can, and check out the goomba sitting at the far right (by which I mean geographically, as opposed to politically which would likely be better described as far-left). There she is, all masked-up, arms folded like a defiant schoolgirl, staring like a zombie, she is just about the only one not following along as the learned speaker speaks. She is smarter. She knows better. Besides, her political pals on the authoritarian Left all agree that masking up even when you’re healthy is “smart” and “science,” despite the actual science saying precisely the opposite.

She is a member of a cult, as I see it. She is wearing her mask as a matter of politics. As I’ve said, it’s the MAGA hat of the Left. A badge, a label, and a signal of adherence to (in their case) the new government-run authoritarian world order. She’s wearing an invisible mask over her ears and a tiny one covering her brain.

Here’s a chaser: another goomba engaging in performative street art: It’s not a “kind thing to do,” it’s an “asinine thing to do.” Kindly follow the science. 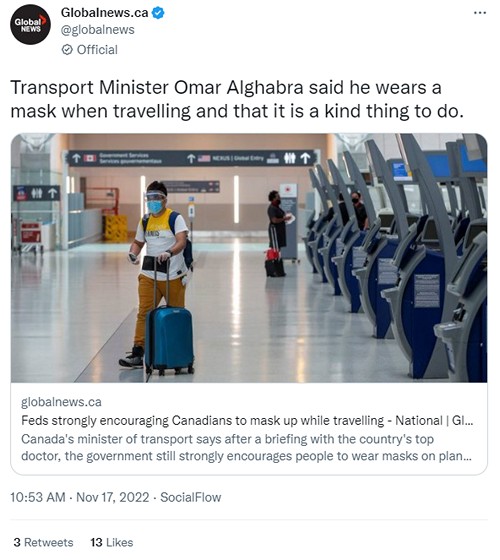 The above scientific video is courtesy of a tweet by “our” Barbara Kay.

Nancy Pelosi is stepping aside, finally. (Here’s the best write-up so far, but read what I wrote too because I mean you already paid all that money!).

I think she is absolutely horrible for democracy. Toxic to the political process, toxic to the dialogue. Toxic to unity. Several of her toxic pals should join her. Start with Maxine Waters. Add AOC. Stir in some other “squad” members and voila, sanity will have a chance of being restored. So IOW, I’m overjoyed. Now don’t get too excited: I would say the same of many key players on the right. And in the “news” media.

The man supposedly tapped as Pelosi’s replacement: well folks, the hypocrisy isn’t leaving with Pelosi. They’re actually doubling down! He is an election denier of the Left. Didn’t think there were any of them? Well, that’s because you’re stupid, and you bought the propaganda peddled by the “news” media. Stop being stupid. It makes you look stupid. Hillary Clinton, Stacy Abrams, and there’s a long list besides them. Nearly every Dem and the “news” media (but I repeat myself, yadda) denied the 2016 election was legitimate, denied the 2016 election results due to fraud, election interference, etc, and called Trump “illegitimate” for four years; and even invented a wacko and now thoroughly debunked conspiracy theory about Trump and Russia to back up their Big Lie and almost take down America holus-bolus. This is much as they did back when George W. Bush was elected, and even way prior to that. It’s literally a Democratic tradition to deny election results. They are traditionalists on this and only this.

It’s hideous what lies they all peddle these days, and how many people buy it (or pretend to).

Here’s a quote from the postmillennial regarding the aforementioned replacement, named Hakeem Jeffries. (And note that the second-to-last paragraph isn’t the sick burn postmillennial thinks it is, inasmuch as Donald Trump did wrongly deny the results of the 2020 election):

…Jeffries has been revealed to have made numerous Twitter posts stating that various elections and Supreme Court seats were “stolen” by Republicans.

Shortly after the 2018 midterm election, Jeffries wrote, “Is the Noth Carolina congressional seat the only one stolen by rouge Republican operatives? We may need a comprehensive criminal investigation to figure that out.”

In September of 2021, Jeffries wrote, “Republicans hijacked the Judiciary by stealing two Supreme Court seats. And now they want us to respect illegitimate decisions from these people? Get lost.”

In February of this year, Jeffries reiterated his sentiment toward the Supreme Court, stating, “the Supreme Court majority has zero legitimacy. Ghosts of the confederacy are alive and well.”

Additionally, Jeffries has made numerous posts taking aim at former President Donald Trump, writing that “history will never accept you as the legitimate president,” following the 2020 election,  and “the only person trying to steal the election is you.”

“The more we learn about the 2016 election the more illegitimate it becomes,” Jeffries wrote in a separate Twitter post…

Speaking of Maxine Waters and election deniers (she was one of those, too, in addition to calling for censorship, calling for harassment, and calling (shrieking) for violence against her political opponents and specifically Republicans, and on and on)… she can’t follow Pelosi out the door fast enough owing to her (also) being an utterly awful politician (like I mean she’s the worst of the worst in a room full of horribles) and a very, very poor role model for any young people and human beings in general. She was caught on camera blowing kisses to FTX CEO Sam Bankman-Fried. Literally. This, after he testified in Congress in an official capacity regarding cryptocurrency. Blowing kisses to witnesses is a rather odd thing to do. Re-read this if you are stupid. Now, as I’ve said, Sam Bankman-Fried and his FTX were Democratic Party megadonors. He/they gave tens of millions of dollars to Dems in the last election (2022), and promised to give upwards of ONE BILLION dollars to help Dems win the 2024 presidential election. A cool billion. I shudder to think what she’d have liked to have done to him instead of merely blowing a kiss.

Here’s the tweet with the video; and here’s a still-shot from the vid: 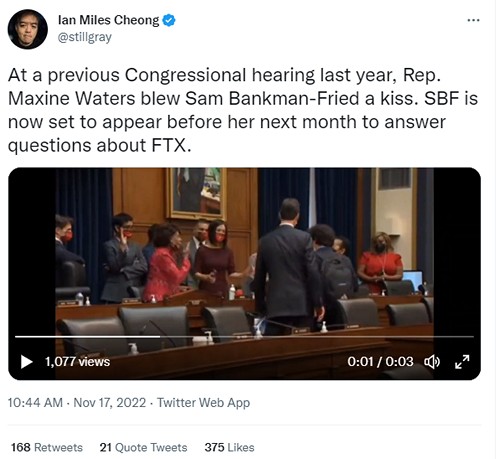 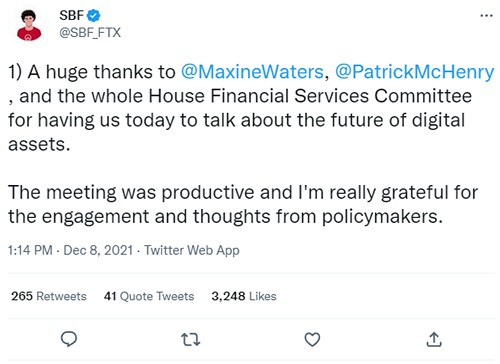 Now, possibly to cover her ass, Maxine Waters is calling for a congressional inquest into the FTX crypto fail. And the Left (yadda) are calling her a hero. Dems sure got it good, man.

The “news” media talk-up the supposed threat to our nation (Canada!) from “right-wing extremists” all day long, as if it’s al-Queda 2022. It isn’t. It’s more like Trump/Russia collusion 2016. But they never speak of the threat from left-wing extremists, which I contend is roughly eight to ten thousand times worse. Why is it they do that? Because they’re liars and propagandists and apologists for the left. That’s why. Good thing we have alternatives. 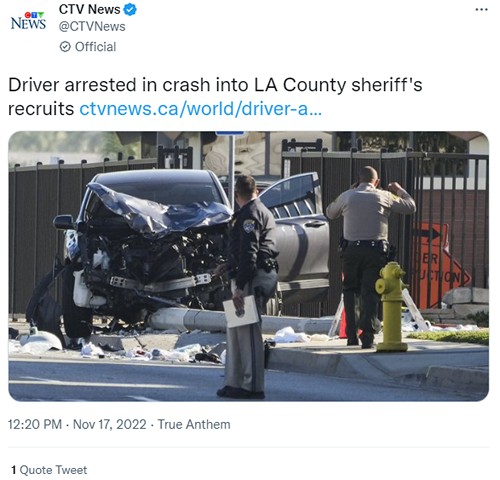 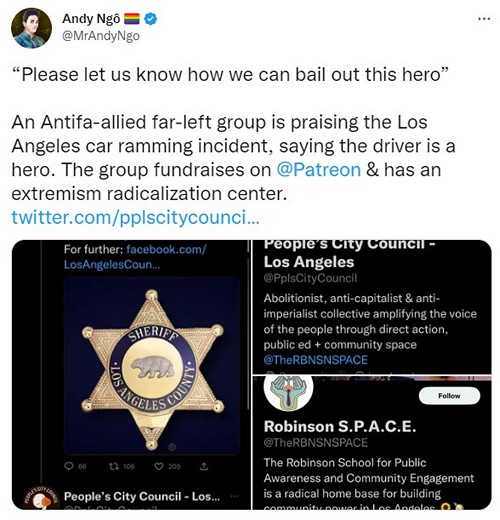 You may remember the news story of the guy who drove his car into the Freedom Convoy folks, trying to kill them. Or maybe you never saw that story because it was, in fact, buried (to the extent possible) by the Canadian “news” media. Canadian man drives SUV through group of Freedom Convoy protesters, injuring 4 | Fox News. | Horrifying moment man drives SUV through Freedom Truckers protest in Canada and injures four | Daily Mail Online.

Segue! Here’s more of this kind of mismatch in “narrative” versus “reality” — the first one being from liberalvision CTV, the second from an independent, truthful, alternate source: 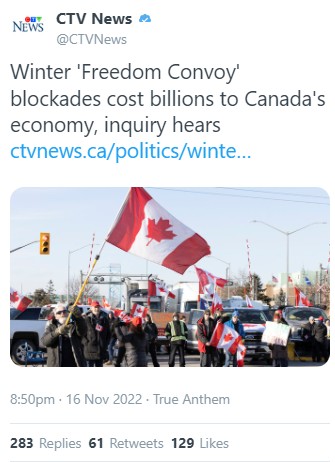 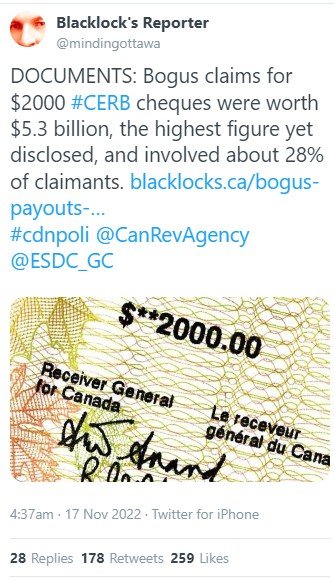 Here’s a common theme these days but don’t worry: many people — especially the Left and the “news” media (yadda) are still going to maintain their pretense about the supposed horrors of so-called “two-tier healthcare” or reforms that would force “American-style” down our throats and thus, according to “experts,” “kill us all” and “bankrupt us” (et al), and furthermore that it is officially “extremist” and [fill in the many blanks] to even suggest reforming the horrible Canadian health system (which is arguably one of the worst and most expensive in the universal healthcare world)… by allowing free enterprise to save it. Because allowing private enterprise — freedom — free enterprise — to fix it would work, and thus it would blow so many their leftist narratives out of the water. So they mute it. And putting a stop to the woke cult as depicted in the tweet on the right would also help us all in myriad ways. 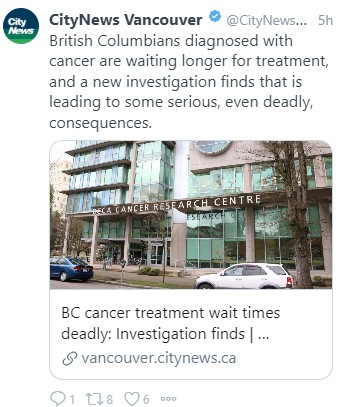 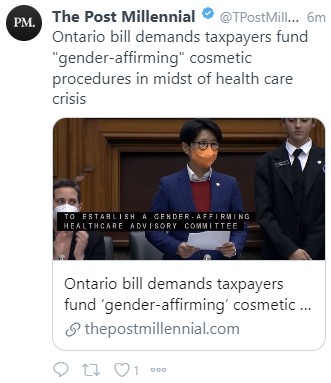 I might have to wait four or six months for a cancer biopsy in this country, but I ordered a new computer monitor yesterday, and it was delivered today. This is how business is run. BestBuy.ca. Good job.