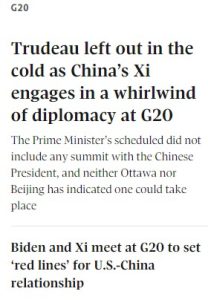 Today, Trudeau’s Globe and Mail division suffered the indignity of having to acknowledge that Trudeau is actually a global political liability with whom not even the Chinese Communists want to be seen. (Don’t worry, the G&M and Trudeau’s other divisions, like the state-owned CBC, will continue to stick with him, bless their hearts and taxpayer-stuffed wallets).

“After over two years without leaving his country, Chinese President Xi Jinping isn’t missing the chance for in-person diplomacy as he joins other world leaders at the G20 Summit in Bali, Indonesia, this week.

“Following a highly anticipated summit with U.S. President Joe Biden on Monday, Mr. Xi will meet with the leaders of Australia and Japan, as well as Indonesian President Joko Widodo.

“Not on the list however, is Canadian Prime Minister Justin Trudeau.” …

And yeah you read that right: Joko Widodo. So there are two dodos at the summit. Plus Biden, so three.

Speaking of people you don’t want to be seen with… You have to dig deep, for some reason, to find much in the Canadian “news” media about the FTX bankruptcy — the latest techno/cryptocurrency/cult-of-personality company (or “company”) to go bankrupt after dazzling the crap out of many extremely overpaid financial poobahs who fell, hook, line, and sinker, for this stinker; and who did so apparently only because it was led by a groovy unkempt hirsute young baggy-shorts and t-shirt and hoody-wearing guy who seemed so yummy and progressive and Democratic Party-supporting. Because the financials didn’t add up, that’s for sure.

The guy’s name is Sam Bankman-Fried. Like Widodo, a weird name, especially given the circumstances. Plus he’s a dodo. So weird.

This group of investment dodos would include the Ontario Teachers’ Pension Fund, which apparently invested about $125 MILLION Canadian dollars and has now apparently lost all of it, due to their love affair with this personality cult leader. Because of their investment in the ether, basically. Gas. Nothingness. They fell for a bag full ’o nothing, and then invested $125 million of other people’s money into that bag. An investment apparently based only on the fact that the guy leading the company (or “company”) was so cool and neat-o and wore baggy shorts and t-shirts to business meetings.

“Besides Sequoia, dozens of others backed FTX’s rise, including Ontario Teachers’ Pension Fund…”
—Wall Street Journal article — one of many excellent articles at the WSJ explaining the bankruptcy which made for great weekend reading for me.

The Ontario Teachers’ Pension Fund issued a statement including these comforting words: “…any financial loss on this investment will have limited impact on the Plan, given this investment represents less than 0.05% of our total net assets…”

With cash like that to lose without it even affecting the bottom line, Ontario teachers should go on strike for better pensions and whatnot! Oh, wait…

I also noticed the scarcity of articles (aside from the WSJ’s articles) that mentioned that this latest failed company led by this latest “cool” “genius” hoody-and-baggy-shorts-wearing groover was an ardent progressive and a huge (HUGE! Like second only to George Soros) Democratic-Party 2022 election-mega-donor who promised to spend upwards of ONE BILLION DOLLARS on them in the next election, the 2024 presidential election. Weird how Dems had no interest in regulating FTX but want to control basically every other company (like, see below)! So, so weird!

He’s now under investigation because he was apparently — allegedly — using investor’s funds and his own customer’s funds for such ignoble things.

Elon Musk was a big meaniepants to Senator Ed Markey (DEM), and then Markey threatened Musk — on Twitter — warning that the US government would step in and “fix” Musk’s companies. No word on whether Markey knew he sounded exactly like a fascist authoritarian dictator from a left-wing banana republic, but sources tell me he did know that (“sources” being my brain).

Personally, I thought Musk was hilarious in this exchange with the Twitter profile mask-wearing for some reason Markey: 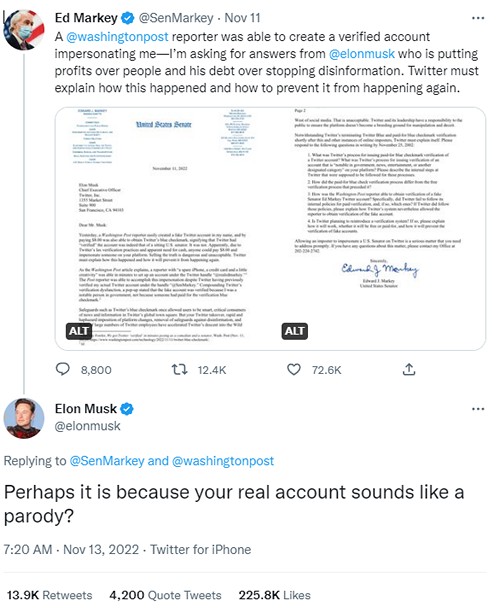 Ed Markey never got his panties in such a knot when countless conservative-thinking folks (including Senators and Congressmen) were mimicked or impersonated in collective efforts from leftists and woke idiots (but I repeat myself, yadda) to shame them and ultimately silence them (successfully). Nor did he express any sentiment toward those who lost their accounts for saying conservative things or presenting heterodox ideas or questions over the past two or three years. Dems have loved the treatment they’ve been provided by Twitter censors on their orders —until Musk got ahold of Twitter. 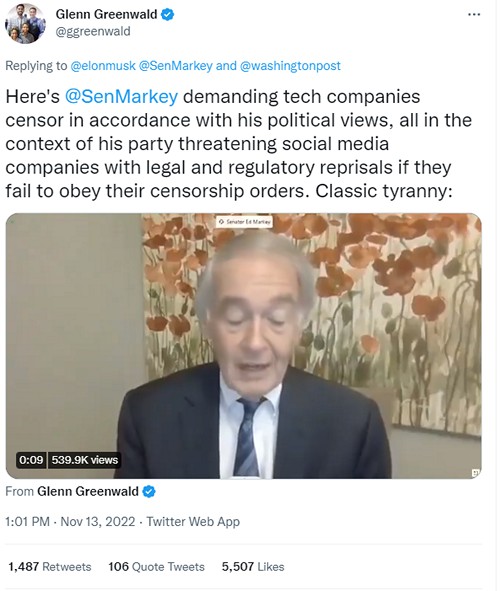 Anyway here’s how the power-drunk and extremely ill-advised Senator replied to Musk yesterday, and do note the “or Congress will” part at the end, in which the Senator misreads Congress’s role or power as that which can control private businesses and citizens at will, but mostly whenever individual Senators have been embarrassed on Twitter and/or they’re pissed off because someone was a meaniepants to them as an elite if overly sensitive Democratic Party Senator and part-time fascist dictator:

Senator Ed Markey is a Justin Trudeau wet dream. And voters should fix them both.

Also see this! And this!

And finally, there’s this, once again from Trudeau’s Globe and Mail division. And once again, how embarrassing for some of the folks working for them who thought they were all about progressive values of wokeness and climate change and sunny ways. Here we have the G&M publishing an article in which it is finally admitted (well OK, it’s but an opinion piece written by John H. Cochrane and Jon Hartley from Stanford University, but still) what every person in Canada with a brain knows: this economic mess didn’t happen “for no reason” or because “it’s a global problem”™Trudeau Liberals. No, the Trudeau Libs did this (along with almost every other western government acting as if they were drunk sheep): 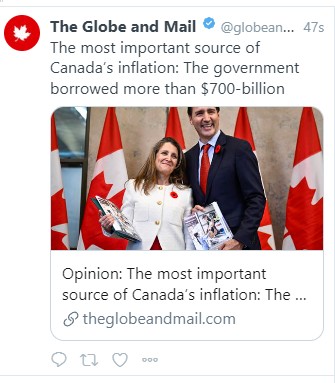 The most important source of Canada’s inflation is simple: Starting in 2020, the government borrowed more than $700-billion, and mostly handed it out. People spent it, driving up prices…

And it goes on:

…The Bank of Canada bears some responsibility for the problem.

…Canada is now saddled with debt greater than 100 per cent of GDP. …

…The government’s plan to provide billions of dollars in cost-of-living inflation relief is almost comical. It sent people money and caused inflation. In response, it sends people even more money. Around we go…

And the hits keep coming:

…Start by getting serious about central bank’s inflation mandate… An inflation target means inflation, not employment, climate change or other goals properly left to elected politicians…

…And coming… until such time as they sound an awful lot like Conservative leader Pierre Polilievre and his message about “gatekeepers” —and yet they aren’t.

…Fiscal policy must commit to fighting inflation – to repaying rather than growing debts. Also, the government needs an economic package centred on spending and regulatory reforms, and supply-side growth. For example, get energy moving again, remove housing restriction and fix occupational licensing. Get the sand out of the gears. …

Liberals are gonna be mad! The dodos.

Previous article
This, and that.
Next article
News Roundup-ette for Tuesday Nov 15, 2022. Misinformation edition!