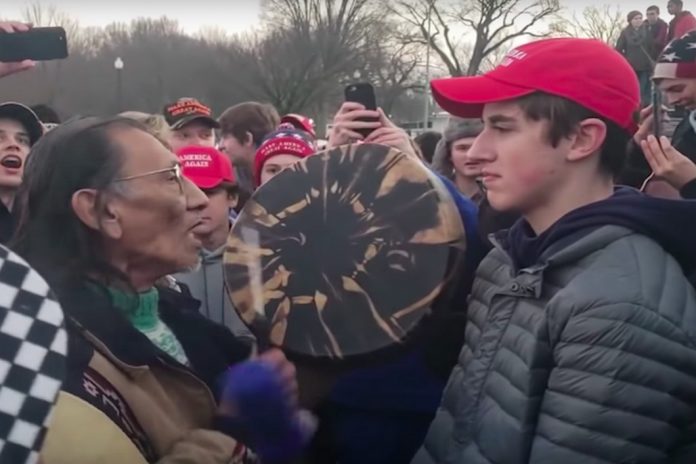 Few things will get a lefty going today more than the words “white,” “Christian,” and “male.” It literally makes them go crazy. Or stupid. Or both.

The news anchors and writers were barely able to even catch their breath after hideously, falsely, using variations of the word “impeach” roughly 18,583 times last week in their reports, on account of a yummy but oh-so-phony (yup, “fake news!”) Buzzfeed.com story, before breathlessly latching onto this new doozy at the end of the past week.

On Friday the news media outlets all, in amazing unity, used a totally out-of-context video which was purposely and nefariously provided to the news media with entirely fraudulent intentions, to smear as “racist” and “privileged” a group of innocent young boys from Kentucky’s Covington Catholic boys school who were in Washington DC to join in the annual (entirely peaceful) March For Life.

The media repeatedly referred to the boys as “white,” “Catholic,” and “wearing MAGA hats.” All three of these words are used by the left as “dog whistles” meaning at least “bad,” but hopefully something far, far worse.

But hoo boy all three at once? That’s like the trifecta for the left and their media; a license to “report” in the most reprehensible possible way. MAGA hats? White? Catholic? At a pro-life rally to boot? We can can call ’em anything we want, virtue-signal, advance our progressive agenda, AND smear Trump in the process! The only way this scene could be better would be if the boys were also sons of rich Texan oil tycoons or Fox News Channel anchors.

To make it even better, the alleged fake victim of the fake story was deemed to be “an Indian elder.”

Oh God this is perfect. Clearly now they can also add “racist” and possibly “white privilege” to their “reporting” …which of course they did, in spades. “Toxic masculinity” was another favorite among the idiotocracy.

Also a part of the story were some “black” “religious” “protesters” who were given a sympathetic nod by the media, despite their being “religious,” which would normally warrant a good sound smearing unless the religion was Islam, which it was not. They were at least not “white,” or “Catholic,” or worst of all, “white Catholic boys,” thus the approving nod. (In fact, the group here was the so-called Black Israelites, who are an extremist group known for yelling racist (black supremacist) comments at white people, and swearing at and hurling insults at white people, as they actually did in this case — the people in this case being the innocent boys who were literally waiting for a bus.)

After engaging in as much identity politics as they possibly could in their first paragraphs, the news media stories went on to describe a completely phony narrative as delivered by the Indian man named Nathan Phillips. He lied, and the media ate it up. Then they all lied some more about the boys.

Shortly after the story broke, just as with the Buzzfeed.com story, the story was shown, by a simple viewing of the whole video, to be utterly false. In fact completely opposite of what was reported.

It was all a lie based on what the phony “victim,” the reporters and the producers and the editors of the news media outlets all knew — or should have known — to be a lie.

But even when the fraud was revealed, most of the news media doubled-down on the lie. They tried to pretend it was all a big misunderstanding of some kind — on your part. Or that nothing in this new news changed the story they told at all. (One Canadian news chiron said exactly that.) It was merely “a different interpretation.” Or the news media didn’t say what you thought they said. Or simply, “there may be another side to the story.” Or as the New York Times allowed in their headline, “Fuller Picture Emerges Of Viral Video…”. “Fuller” meaning “we didn’t tell you the truth before.”

Among the horrible consequences of the media’s deceit: various calls from leftists on social media and from their “news” media calling for, among other horrible things, the death of the boys — and their parents. Seriously. To wit:

The tone of the commentary was—well, here’s how one writer for Vulture put it: “I just want these people to die. Simple as that. Every single one of them. And their parents.” The students were, in this estimate, only “white slugs.”

The entire boys’ school is closed today out of fear for their safety. But there are other serious consequences: our growing and maybe now complete inability to trust the news media to perform their first and most important duty, which is to tell the truth; and to not be biased, or be lulled, willingly or not, into reporting based on their obvious confirmation bias. Repeatedly.

Even the left’s bullhorn Whoopi Goldberg questions these repeated “mistakes,” in one of the most revealing admissions heard as yet — this on the horrendously stupid The View:

WHOOPI GOLDBERG, HOST: Many people admitted they made snap judgments before these other facts came in. But is it that we just instantly say that’s what it is based on what we see in that moment and then have to walk stuff back when it turns out we’re wrong? Why is that? Why do we keep making the same mistake?

JOY BEHAR: Because we’re desperate to get Trump out of office. That’s why.

The truth be damned. This is the new motto of the left, including their news media.

Previous articleDollar Shave Club isn’t a liberal-left, anti-male virtue-signaler, yet, as far as I know
Next articleLeft-wing paper floats left-wing group’s massive tax increase; polls badly among its own readers