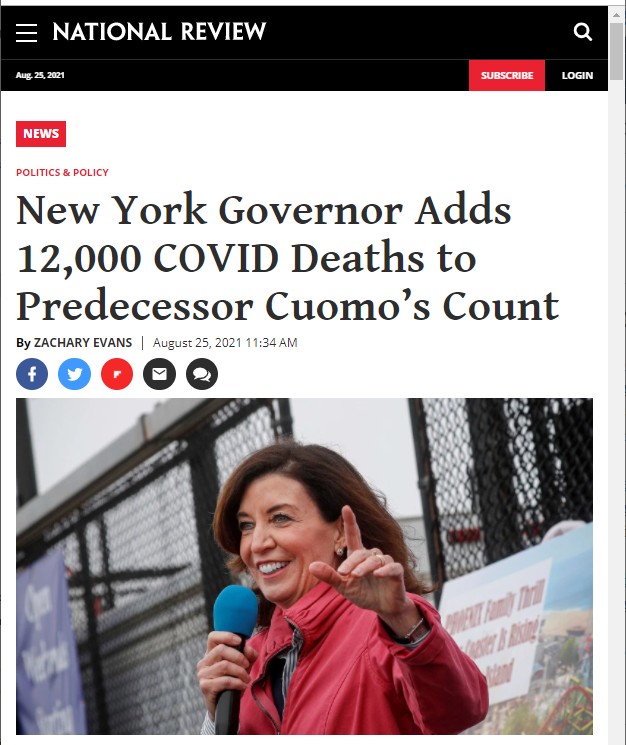 It’s one thing to be off by one point or two, especially when you’ve made your government as huge as New York’s, as all-encompassing and as controlling and as micro-managing of every aspect of every life as theirs has become. I mean it’s a big task. Just as the old Soviet Union. But off by 25 percentage points? 12,000 formerly living New York humans? With families? No, that’s not a mistake. That’s not a miscalculation. That’s pure lying and corruption on a scale unmatched outside of communist regimes (or even Ottawa these days).

And you have to wonder if the news media weren’t playing along.

The now-disgraced former Governor Andrew Cuomo (DEM) lied about, well just about everything, also on a scale unmatched outside of communist regimes, and we’re only just starting to find out the scope of it, now that he’s been forced out by his corruption and is replaced by a new Gov, a woman (a woman, a vaginal point which they will not let you overlook), let me repeat, a woman, named Kathy Hochul (she’s also a Dem, so… eyes wide open folks…).

National Review has the story, but — and this is a big part of this news — it’s notable how few other news outlets are covering it, and how buried the stories are within their stories about “how badly Florida is doing,” and how Justin and Jagmeet dress casual yet cool, etcetera. If the story is in the Democrats’ Washington Post division, I couldn’t find it at this hour. Their New York Times division? Same thing. Lots of breathless stories on the incoming ([email protected]#*%) Gov, including one today, but all failing to mention the 12,000 extra dead humans, in New York state (not in Afghanistan or Syria, but New York). Mostly, as I’ve said, the big news is that she’s a woman. That’s the key point of interest for these crack journalists who are still alive while 12,000 of their compatriots — some of them women! — are notably dead. 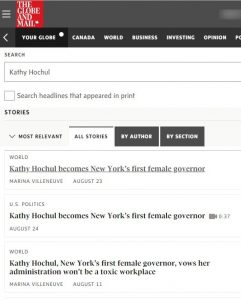 In Canada? The Globe and Mail: Hiding it. There are numerous stories about her there, all breathlessly reporting on New York’s first woman (woman! woman! woman!) governor, but not a thing about this additional 12,000 dead people. Maybe the 12,000 were all white men — “settlers”, or Republicans — which, given their recent editorial and activist style of reporting and editorializing and feature-writing, I would understand as being a non-issue for them.

The Postmedia group (National Post, Vancouver Sun, and a hundred others) are also hiding it. To their credit, liberalvision CTV and the state-owned CBC are both running a story about it.

Also newsworthy, though, is news that corrupt liar Cuomo has also had his uber-celebrated (by ALL lib news media) EMMY AWARD taken back from him — on the very day of his resignation. You know, that one which the news media couldn’t stop reporting on, touting Cuomo as a demigod and model politician and the epitome of government gloriousness and a paragon of honesty, openness, and transparency, and straight talk (most often to his brother, CNN anchor Chris Cuomo, which the lib news media also celebrated instead of shaming) for which he was awarded this glorious shiny trinket. Again, though, most “news” media are hiding this Emmy take-back news from you too. The Wall Street Journal wrote it up masterfully with these opening words in their editorial board opnion piece, “Scrubbing Cuomo’s Emmy — Entertainment elites try to erase their political sycophancy.“:

What the liberal establishment giveth, it can also take away. Last November the adulation heaped on New York Gov. Andrew Cuomo reached an embarrassing apex when he received an Emmy award “in recognition of his leadership during the Covid-19 pandemic and his masterful use of television to inform and calm people around the world.”

But now that Mr. Cuomo has been run out of office over sexual harassment allegations, the International Academy that bestows the celebrity prizes wants to pretend its partisan sycophancy never happened. On Tuesday it rescinded the award granted only nine months ago, replacing the announcement page on its website with a notice that Mr. Cuomo’s “name and any reference to his receiving the award will be eliminated from International Academy materials going forward.” …

I note that Barack Obama has retained his grand Nobel Peace Prize, awarded by those idiot activist peace gods right after he was elected, and just before he bombed the crap out of numerous countries. There is a lot of work to do yet.

This would be a good time to play another round of IMAGINE IF HE WERE A REPUBLICAN.

Previous articleWhen you’ve lost the Star…
Next articleShe ain’t heavy. She’s a lightweight. Nonetheless, the Taliban are her “brothers”