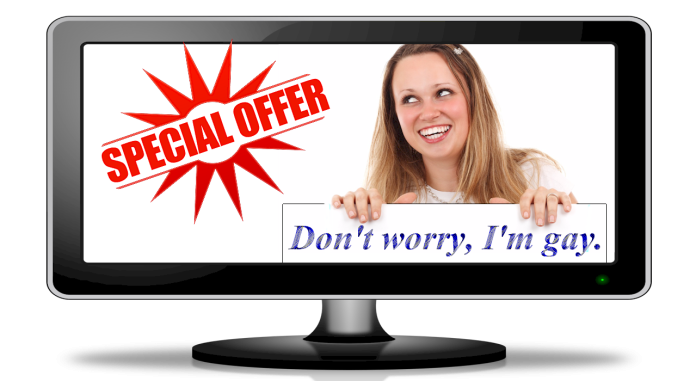 We watch TV for a couple of hours every evening, and can’t stand much more than that — unless we’re watching a golf tournament and Tiger Woods is making another amazing comeback. It’s not that we don’t enjoy sitting on our couch for more than two hours — our couch is nice and comfy; and we have this fantastic, huge TV with way too many subscriptions.

It’s that we don’t particularly love having things inserted into our throats without prior permission — constantly having idiotic woke platitudes and the latest trendy new left-wing culture warrior bromides being crammed down there — a place reserved for beer, wine, and assorted spirits and foods. It would be bad enough if it wasn’t also as if it were created by woke 17-year-old socialist climate change lesbians from the AOC-Foreva! PAC And Think Tank Non-Profit Entity For World-Saving And Diverse Social Justice Transgender ‘N Gay People Of Color ‘N Intersectionality ‘N Climate Change. If at least it was slick and subtle but no, it’s childish, pedantic, and insulting, and as in-your-face as they can make it given that this is Canada and not North Korea. And you find it in the most unsuspecting places. Which I’m sure is by design.

So I’m standing up for the couch people today. We’re here on our couch to be entertained or informed (informed about things we want information about), not enlightened about the vast and increasing range of social justice and diversity and gayness acceptance promotion, for the eightieth time today (“not that there’s anything wrong with that” — pace Seinfeld of Ye Good Old Days of Yore — obviously, but I hasten to point this out because idiots from the social justice warrior left love to virtue signal by pouncing on and misrepresenting these supposed missteps, pretending it’s evidence of “yet another” Nazi or transphobe or homophobe or white supremacist or misogynistic or racist or anti-sumpin sumpin or extreme-right or fascist or Maga-hat-wearin’ trucker in our midst… and this is owing to the fact that they’ve got literally nothing of intellectual veracity to offer).

This phenomenon — ages in the making but booming since soon after the BLM riots of 2020 — is especially true in TV ads today, which seem to have become more of a funky new learning center for the wonders of racial and sexual diversity and all the yummy woke cultural values, instead of vehicles for, you know, the promotion of yummy capitalist products. Although I’ve also had quite enough with the tampon ads thanks, especially if they’re going to start marketing them for “bleeding people” or “menstruators” and picturing a bearded dude fixing a sanitary napkin into his (“hers”) Stanfield’s. (***See this, below, about Stanfield’s.)

But I see it all over the Web too in ads for everything from banks to cars to coffee, and even within bank apps. Soon after the BLM riots of 2020, white people, especially men, disappeared from ads and were replaced by black people. And this is in Canada. A space alien visiting Canada’s media today would have a hard time accurately describing the demographics of Canada.

Anyway, what did I eat to cause me to get into this lather? It’s that someone mentioned this on Twitter yesterday (and I now follow them, because yessss!) —and wow what a response he got. I can’t possibly copy and paste every reply (and I did read all of them), but go and look for yourself. Most everybody agrees… which makes me wonder: who’s driving this current TV and media ad truck? Who’s convoy is this? And what is going on here? 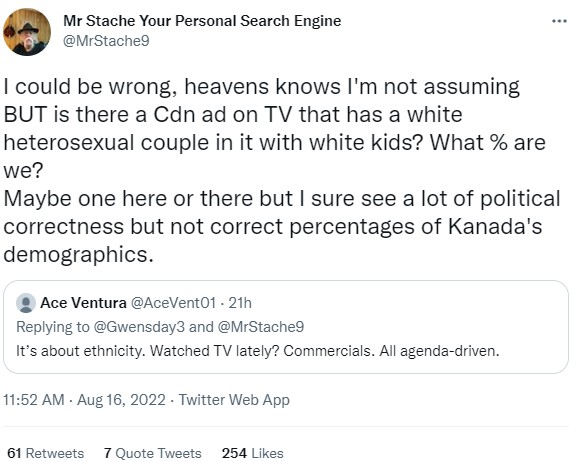 I could be wrong, heavens knows I'm not assuming BUT is there a Cdn ad on TV that has a white heterosexual couple in it with white kids? What % are we?
Maybe one here or there but I sure see a lot of political correctness but not correct percentages of Kanada's demographics. https://t.co/yxAQupt2Mo

The replies are the likes of these (apply SIC as needed):

*** I wanted to link to Stanfields, because it’s a great old Canadian men’s underwear manufacturer and a perfect vehicle for my male sanitary napkin joke. But lo and behold, here’s their opening page: rather than being about, you know, underwear, it’s a mini-festival of intersectional wokeness and racial diversity intersectionality justice woke racial identity truth and reconciliation wokeness! 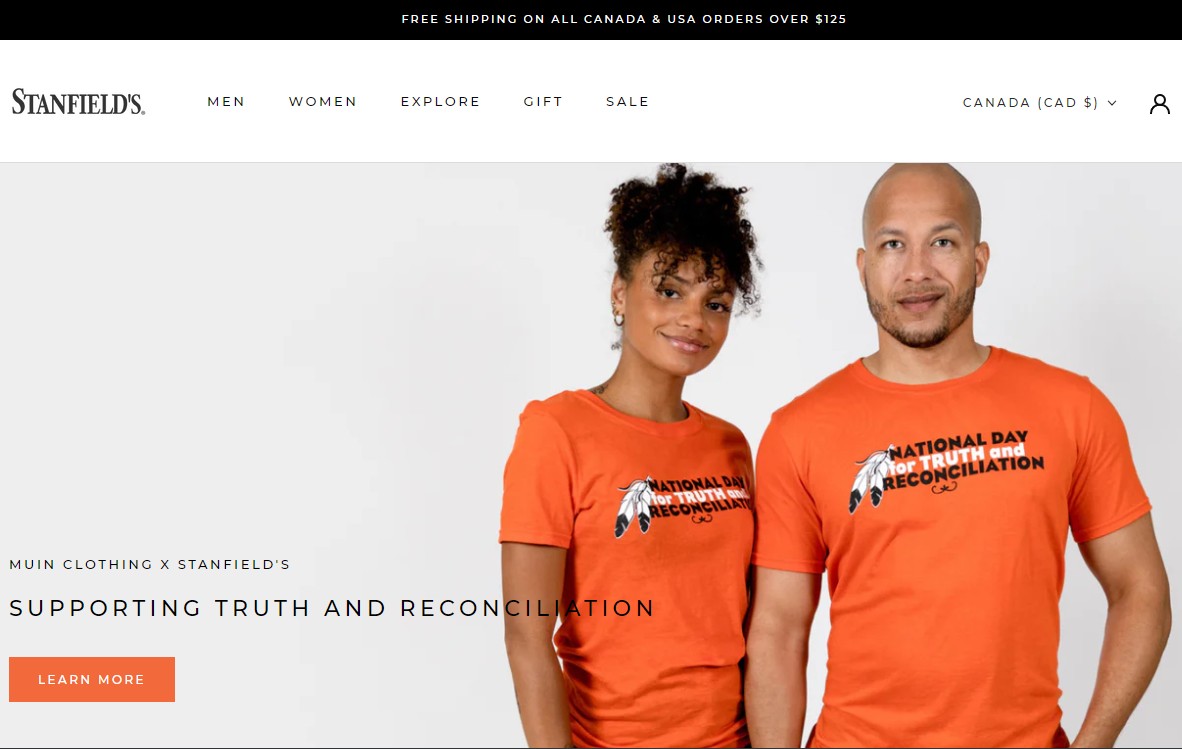 Previous article
Vancouver & BC under left-wing/NDP admins: how it’s going so far
Next article
Liberals’ “Canada Child Benefit” program shown to be another govt fail: favors rich rather than poor (!)