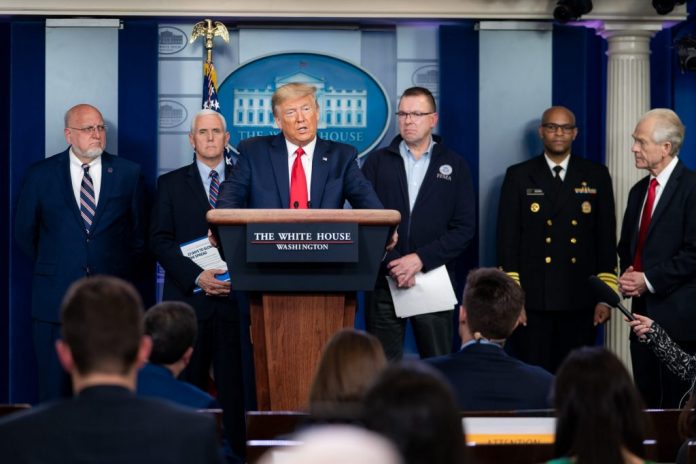 They — the media, which is acting in amazing union as a solid block or cabal — is circling the wagons around WHO, precisely and only because Trump stopped funding of them, pending his administration’s review of WHO’s communist leadership, ties, and horrible Wuhan China Communist Virus response. One would have to be wearing very large, dark, dense blinders, to not see WHO’s hideous defense and praise of China, and the other lies and poor guidance spread the world over by that communist-led (literally, Dr. Tedros is a communist) organization, which is so fraught with outsized Communist Chinese influence; and thus the clear rationale for Trump’s “pending review” actions. It’s the least he should do. It’s the least Canada should do. The fact that Canada won’t, scares me, knowing what we know already.

This is an exact replica of their — the cabal’s — response to Trump, way back on January 31, 2020, after he stopped travel to and from China on that early date, in order to protect America from the virus. They uniformly, like a block, joined by the WHO, hated on Trump, insinuated or outright called him a racist and/or a xenophobe, and/or shouted that he was overreacting and going way too far, needlessly. Trudeau and dozens of other liberals across Canada and the U.S. openly defied him, because TRUMP, by gleefully going out to Chinese New year events and restaurants, taking selfies among the crowds, and cajoling others to go out and do likewise themselves. And this was after the virus had hit North America. Amazing lack of awareness and horrible advice. Only days later the lockdowns started in Canada.

Then when Trudeau did finally see the light, and did finally (sort of, as we still later found out) close the borders way later, after it was all but too late, it was all good on Trudeau. Thumbs up, they wrote. Solid leadership! Not racist, that’s for sure! But they never fell on their sword, did they? No, they did the opposite. They excused Trudeau, covered for his actions/inactions, and continued to hate on Trump anyway. It’s pathological.

The disturbing pattern here is that they — the cabal — will sacrifice truth, honesty, objectivity, and, in this case lives as a result —all to show their disdain for their political opponent, and to be able to claim “look at me! I’m on board the anti-Trump train too! Like me! Notice me!” The very fact that I can write, without even thinking, “their political opponent,” when I’m talking about the news media and their “opponent” Trump, is extremely relevant, telling, and disturbing. But that’s exactly what’s going on, and although they are clearly and possibly irreparably vested in their anti-Trump (and, while we’re at it, let’s admit it’s all really rooted in anti-conservative) politics, if they were ever to regain any semblance of objectivity — their core journalistic principles — they’d see what I just said as an objective truth. Without even thinking.

So now we have a situation where whatever WHO says, even if it’s wrong (and it has been wrong — objectively wrong — on many extremely key components of their response or lack thereof) the Canadian government and its cheerleaders abide, because they’ve locked themselves into that mindset for political reasons, ideological (globalist) reasons, possibly blame-shifting or hiding reasons, or for reasons of political correctness. As Jonathan Kay (@jonkay) wrote today on Twitter, speaking of Dr. Theresa Tam and her uttering bad science and bad advice to Canadians even while staring facts and logic right in the face, it is “out of some mixture of stubbornness and institutional inertia.”

And the media, which is charged with the responsibility of questioning the response in search of truth, doesn’t question anything. They cover for the mistake. They rush to WHO’s and the Trudeau pandemic team’s defence. A scan of the state-owned CBC anchor Rosemary Barton’s twitter feed will amply demonstrate that. But, see, this is the reaction only for Trudeau. And for WHO. Not Trump, against whom they unthinkingly, gleefully bash as if it’s a hobby, or worse, a duty to their tribe. Because alas, politics wins over truth, even for them — the ones who are supposed to get at the truth. They have thus failed, miserably. Knowingly. On purpose. That’s pretty ghastly.

Failure is bad for the news media, but it’s obviously bad for a nation’s people too, and democracy, and manifestly, for our very national future. But as we can see in a pandemic situation, it’s also dangerous for our lives. Hiding truth, covering-up for mistakes, whitewashing lies or errors, will end very poorly for you, your family, your nation — and since we’re talking about global organizations which WHO ostensibly is, it affects the whole world. So when Donald Trump, who says as many stupid things as smart, says that the news media (or at least certain media) are “enemies of the people,” he’s objectively correct.

Here’s a key example from my today’s Twitter feed:

Good lord. News media can indeed be the enemy of the people, as in this example. https://t.co/NVEiGy3fLK

And here’s what got me going on this rant in the first place:

Article full of inaccuracies and downright mistruths: accuses Trump of "dismissing concerns about COVID-19 as a 'hoax'." This statement is false. It is an already well-disproven media and left-winger anti-Trump lie. …/2 https://t.co/DE54Zqc5L8

The poorly written and edited G&M article also "reports" — as fact — that Trump’s WHO funding pause is his "most serious effort to shift blame for the U.S.'s handling of the pandemic…"

The G&M is not yet capable of reading minds. They guessed, and reported their guess as fact

3/ Furthermore, if the Canadians media were even 1/8 as bombastic toward and cynical of their man Trudeau during Trudeau's useless word-salad briefings, and they made every effort to criticise and back him into a corner as they do Trump, Trudeau might also seek to "shift blame."

4/ Unfortunately, Canadian media spend more time criticising Trump than Trudeau; and in fact invest effort in actually covering for and explaining away Trudeau —instead of pushing Trudeau or his team for actual answers to their overly gently-posed questions.

Previous article
I’m aching for facts and truth and objectivity from reporters. Not Akin.
Next article
CTV spins a web of faux freak-out on Trump. Again. This is not good news.