I’m aching for facts and truth and objectivity from reporters. Not Akin. 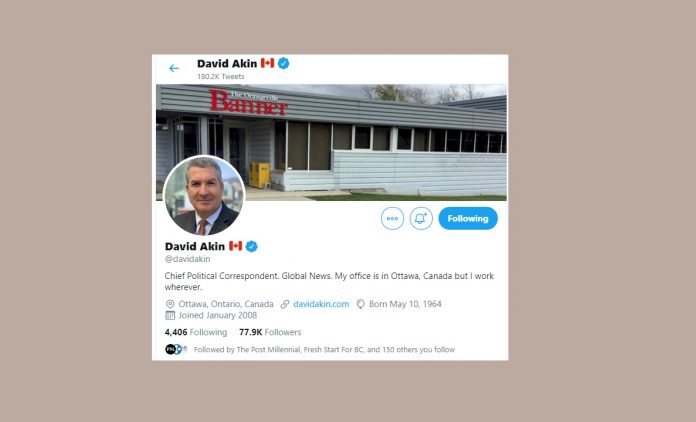 Here’s a tidbit I thought I’d mention: There are so many anti-Trump tweets on Twitter that you have to be super selective in who you follow, lest your Tweetdeck column move so quickly you can’t even follow it. It’s absolutely the least original thing on Twitter, this Trump-bashing, but people feel like they fit in better when they do it, I guess, so do it they do. You want to stand out? Don’t smear Trump for at least five minutes on Twitter.

At least you can avoid those anti-Trump-obsessed people, so I do, reserving my left-wing follows to people who are reasonable and, well, sane. None of this is worth talking about.

What about when those whom you choose to follow for information and news and headlines and such go ahead and retweet those idiotic tweets. I can’t avoid that, very easily or happily. If I can’t follow reporters, then I’m pretty stuck. I need information, but I don’t want to be bombarded by pure crap, especially from reporters. Reporters themselves say (and tweet) enough nonsense for me to criticize without them tweeting anti-Trump bullshit.

Theses retweets were originally tweeted by ardent and unambiguously left-wingers of course. When they are retweeted by reporters and columnists in Canada, repeatedly, over and over, then retweets do in fact indicate endorsement. And repeatedly hammering home a vexatious, partisan political point betrays itself as an agenda, or even as propaganda. When it is perpetrated by our media establishment, this is what is worth talking about.

Now, Canadian columnists retweeting partisan anti-Trump crap, I can understand, except that they’re Canadian, and thus have their own easy target called Trudeau, if only they’d open their minds and eyes and criticise him instead of running cover for him incessantly as they do; and except for the fact that they are absolutely obsessed with being — and being seen to be — on the good left-listing ship Anti-Trump. Look at me! Look at me! I’m on board! Some of these columnists’ Twitter feeds are replete with anti-Trump tweets, as if they’re left-wing Americans instead of Canadians. It makes them feel cool and loved by the people they care about, I guess, and it clearly helps them express their utter contempt for Trump. But it’s to their shame, and it’s something we all have to be wary of as consumers of news and information, because even commentary has to be based upon fact and logic and fairness.

But supposedly hard news reporters retweeting this crap? No, I don’t see how that’s OK with them, moreover how it’s OK for the news organizations they represent. You’re going to have to explain to me how this — betraying an abject partisan political bias using the media’s giant bully pulpit — helps a journalism industry already largely mistrusted by the people. It bugs the hell out of me for any number of reasons, but honestly, they’re writing their own industrial obituaries, and that’s not good, by and large. Alas, Darwinism at work, I guess.

Take reporter David Akin (@davidakin) as an example. He tweets all day long, sometimes mundane and minimally useful details of Trudeau’s meetings and so on, often a useful tidbit which leads to some great stuff; but when he’s not doing useful work, he’s retweeting rabidly anti-Trump tweets.

All his obsessive (and exclusively) anti-Trump retweeting would be just lovely and unremarkable if he weren’t also the Chief Political Correspondent for (Canadian) Global News. Review his timeline. Today: half a dozen or so anti-Trump-or-related retweets, so far. No retweets are favorable to Trump (which wouldn’t be right either; I’m just making the point to demonstrate the partisan political bias).

Some of the tweets are downright smears and insults. I haven’t been able to find any tweets that are pro-Trump or defensive of Trump. Nothing to do with “news” or “objectivity.” They’re clearly, obviously anti-Trump smears, sometimes joky, usually by well-known left-wing actors which I suppose he thinks provides him cover.

Moreover, much if not virtually all of his anti-Trump retweets can easily be viewed by normal or even nominally “informed” folks as egregious lies, half-truths, and propaganda, just as viewers see CNN (etc) for what they are.

One retweet from today has the added bonus of being a smear on Fox News Channel. Leftists love that. But let’s be clear: only leftists love that. Normal people don’t. Regular people think Fox News, the world’s most popular news channel, is a fine addition to our buffet of newsy offerings, which has the added benefit of revealing how deceptive Akin and his compatriots can be in their reporting — to say nothing of their tweeting. Does Akin smear CBC and CTV? Why not?

Akin adds his own comments too, sometimes.

Kushner said that? With a straight face? cc: All of Puerto Rico. https://t.co/IJa6vNMUNk

Yamiche Alcindor, whom he retweeted, is someone I’d call an anti-Trump White House “reporter” who works at PBS, and formerly the New York Times. National Review recently wrote of Alcindor “…whose Twitter feed is littered with all kinds of absurdity…”. She seems to be on China’s side, and asks idiotic, unfair questions of the President every chance she gets, almost as badly as CNN’s awful Jim Acosta does. But at least her tweet was, in this one instance, straight-up and without snarky comment unbecoming a proper reporter.

Yet unprovoked, Akin jumped right in and took a cheap-ass, gratuitous political swipe at a U.S. president (a rather pedantic swipe at that) in his retweet. Again, he’s Global’s Chief Political Correspondent. So where, pray tell, do I go for apolitical reporting? Certainly not the state-owned CBC anchor Rosemary Barton (@RosieBarton), who is apparently Justin Trudeau and the Liberal Party’s Highly Paid Defender In Chief And News Anchor For The State Broadcasts.

Of course unless I already know the truth and the context, I could not know that what Akin and Barton and others are tweeting and retweeting is pure partisan political nonsense or worse. Point being, there are still lots of very successful sources like Fox News to inform me, thank God. So I don’t really need them, and you probably don’t either, which may explain why so much of our old establishment media is failing — literally becoming bankrupt financially, if not also journalistically.

Previous article
An All-Canadian FAIL
Next article
Media circles wagons around WHO; Also hated on Trump for closing borders to China