The increasingly ineffectual and ridiculous Toronto Star fronts their online page this morning with the very best picture they could find of the participants, which include The Toronto Star (have no doubt),  Jack Layton, Stephane Dion, Elizabeth May, and Jill Duceppe.  And of course that, hmm… let’s see if I read the esteemed Toronto Star correctly:  that idiot with his back symbolically turned against all of Canada, afraid to face the nation, the heat, and the media scrutiny, and possibly even afraid to face “the facts”, and face the debate, and the opposition, and you, and worse, he’s of course hiding because he’s got that evil “hidden agenda”, Stephen Harper.

No, they don’t say that, at least not under the picture, but they also don’t tell you they’re totally in the tank for the liberal-left in this country and the world generally.

And you trust this crew to report “news” to you?

Hideous. Canada’s media is so in the tank for liberals and leftists that it’s not even a hidden agenda anymore—it’s right out there in the open, and if only Canadians could compare it to anything, they’d see for themselves. 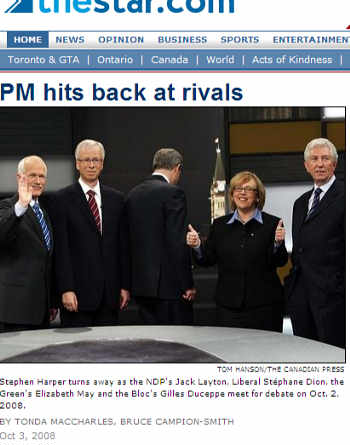 If this picture doesn’t help exemplify the arrogance and bias and perfidy of the liberal-leftist media in this country, then you may be beyond help.

The preponderance of my quick scan of the media this morning on TV and “news”papers is that everybody except Harper won.

The only people who think Dion won!  Or Layton won!  Or Duceppe won!  Or May won! —are the several self-anointed media elites and the team-player punditry particularly in Toronto but also Montreal and Vancouver, where they are so completely liberal-left and in the tank for liberals and leftists, and so completely out of touch with average Canada, they should be completely ignored.  In fact whatever they say, think the opposite.

And Canadians should stop behaving like sheep being fed oats by their elite media betters. 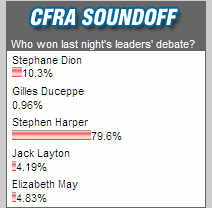