As I wrote several days ago, I wonder if the Liberals and their government or their contractors looked at ProudToBeCanadian.ca and me personally, since I am in opposition to everything they did and continue to do.  I am vociferously against the gun registry and always have been.  I wonder what kind of files the Liberals have or had on me.  And did they shred them or are they still around?  Does the Liberal Party or their contractors monitor me now?  What are their plans for me and this web site?  Threats of lawsuits? A tax audit?

I’d written that in an article last week, there was this off-handed paragraph:

At first, they drew up a plan to inventory federal Internet sites, Lambert said. Later, they altered their pitch to perform surveillance on “extremist” groups complaining about the federal gun registry.

The liberal media is completely incurious about liberal governments secretly “surveilling” groups that are opposed to them but freak out in faux high dudgeon when President Bush has the audacity to secretly keep an eye on Islamofascist terrorists who want to kill Americans.

Today there’s this article.  Both the one before and this are related to the Liberal Party adscam sponsorship scandal and the criminal trial of its Chuck Guite.

MONTREAL – It was as if someone had gone to the local magazine shop, picked up all the firearms magazines, and photocopied the pages especially the ones about the right to bear arms under the American Constitution.

That’s how a witness, testifying Tuesday at the fraud trial of Charles (Chuck) Guite, described how Groupaction Marketing Inc. monitored the Canadian pulse regarding federal gun legislation, and got paid $150,000 in return.

He said Groupaction brought him a series of printouts from various websites, that weren’t fit for the Canadian Act.

‘‘Most were about the American right to bear arms, or dealt with military gun deals, even though everything military was exempt in the legislation, or showed various types of firearms that were more popular in the United States than here,’’ he said of the 70 sheets of paper.

‘‘I recall just pushing it back, saying we don’t need this.’‘

He said his organization, under the umbrella of the Justice Department, was already getting the pulse of the nation, through monitoring the internet and a 1-800 information line.

The media had no questions about that.  Perhaps they were busy monitoring the activities of Christian groups in Canada. 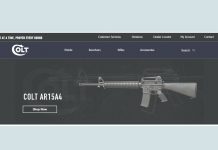 Hi Justin Trudeau. About that rifle confiscation: rifle deaths in USA plummeted in 2018.