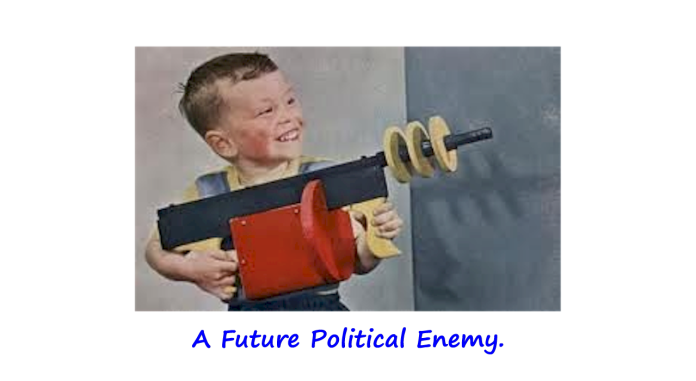 Trudeau’s latest stupid new gun controls and bans are once again not targeting criminals, but legal gun owners. Because he hates those who love their guns. Like me. The latest laws and rules and bans specifically and exclusively target licensed gun owners and nobody else. Again: the proposed new gun controls — which increase already extremely strenuous gun controls — are designed to further stymie not criminals who own guns, but rather — only and exclusively — legal gun owners. And even if you read the Bill 80 times, you will find that it will affect nobody else. That is clear. Objectively clear. It’s a fact. It’s a scientific fact. It is literally true. In every way. There is utterly no other way that anyone who isn’t a liar could put it. Fact check: true.

So when you hear Trudeau lying like this, it is grating.

It is not merely grating to hear this from the Canadian government leader: it’s also objectively scary. It kind of freaks me out, to be honest. And it should freak everybody out. Firstly, it should freak out those on the front lines of his lying and misinformation and disinformation and projection and gaslighting: the “news” media journalists who report it (usually without any question as to its honesty).

But they’re not freaked out. A simple tweet by CTV reporter Mackenzie Gray (above) demonstrates that.

Or as a “denier” — as Minister of Crown-Indigenous Relations Marc Miller did to those who dared question the very questionable framing narrative about the potential graves in Kamloops. “Misinformation” and “disinformation” are contemptible terms when used by the government against citizens in this dishonest way, but the term “denier” is a particularly contemptible — intentionally so — use of abhorrent language meant to conjure images of the Nazi Holocaust and those who deny it, as they seek to brandish their opponents — fellow citizens — as akin to Nazi defenders, which is clearly an enormous insult. And they know it. (Also see “climate denier.”)

Trudeau is the same government leader who declared, as you may remember, that the truckers’ freedom convoy participants and supporters had “unacceptable views” (among his other insults and lies about them).

These are all words used by none other than the leader of the government of Canada, Justin Trudeau. Which gives the words and sentiments legitimacy in the minds of those on the left including the “news” media. It emboldens them. Soon, the delineation between “good guys” and “bad guys” is more and more clear to them, as is what to do about the “bad guys.”

This isn’t a war on crime. This is a political war. A culture war. Trudeau’s progressive army isn’t going after gun crime nor protecting the safety of Canadians. Licensed gun owners are among the very best and most law-abiding citizens in the country — and that is another objective fact. It’s actually a legal requirement! As Justin Trudeau knows (I can only hope), a Canadian citizen cannot get a gun license — or even harder, a Restricted gun license as I have — without the very most rigorous background check by the police, which itself only follows taking a rigorous gun safety course (and a separate one for the Restricted class) and then two tests — one testing practical elements, and one the theoretical lessons learned, for each class of license — regular and restricted. And that’s before you even try to buy a gun, which adds additional layers of police and government checks and procedures making it almost comedic, in my case, to finally get my semi-automatic handgun after a long waiting period, and police getting the permission of my wife (yes, she has to approve it in writing!). Note also that handguns are and always have been “registered” on an official registry. I haven’t had so much as a traffic ticket in at least 30 years. I’m not the problem Trudeau wants you to think I am. Canada needs more people like me, in my humble opinion, not fewer. I’m a good guy. Not a bad guy.

No, what they’re doing here is going after political opponents and a whole culture — because they abhor their opponents and their ideas and their thoughts and their culture. Not just on guns. On everything. (The “bad guys” are anyone right of Justin Trudeau or Jagmeet Singh, as if you didn’t know by now.)

As if to prove it (if the restrictions on LEGAL gun owners didn’t already do that for you), as a part of their latest gun bans and controls and rules and regulations, Trudeau’s cabal is going to sideline Airsoft gunplay as well. Airsoft guns are not particularly dangerous. They are about as harmless as most anything else we do for fun or sport. “Although similar to paintball in concept and gameplay, airsoft pellets do not leave visible markings on their target and hits are not always apparent,” says Wikipedia. People who play in organized Airsoft games are expected to shout “hit!” (and that’s if they notice they’ve been hit) because otherwise, nobody would even know. So apparently, progressives don’t even want people to gain an interest in guns or shooting sports or any such non-progressive culture. They need to control the culture.

And by definition, this is all social engineering — but done on a federally mandated government scale, under the guise of safety and crime reduction. So it’s being done under false pretenses. It’s also sewing division among the population and seeding hatred of those with whom you disagree politically or culturally. By design. This has utterly nothing to do with the safety of Canadians, this is a political/cultural hit job. And it’s appalling. It’s also appalling that Canadians allow this to happen without standing up and shutting this down. Then again, Trudeau and his progressive cohorts are counting on exactly that.

It’s a reminder of the wisdom of the American founders and their prescience in drafting the Second Amendment. We ought to have something like that here, with the full natural right to defend ourselves acknowledged within. And have proper tough-on-crime crime strategies based on science and data and facts. And the government should stop its misinformation and disinformation and its slandering. Moreover, the government should stop targeting political opponents and engaging in an adjacent culture war —against its own, good, citizens.