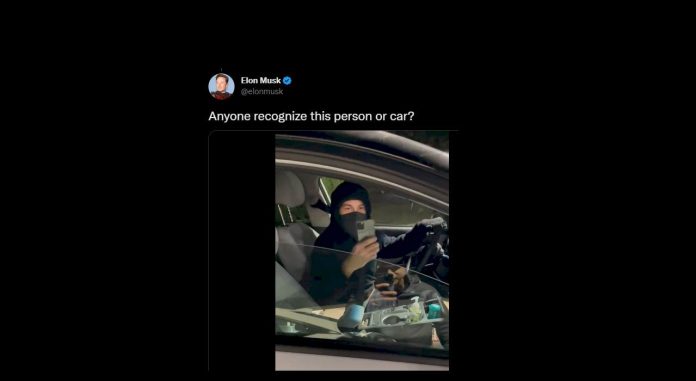 If you’re a lefty or a journalist (but I repeat myself yadda), you’d readily acknowledge Elon Musk is clearly at risk of harm, even assassination, perhaps more than most humans on Earth today. I’m so sure of this because some of you have put him at that risk that I speak of.

Musk tweeted a video yesterday documenting some ANTIFA-like creep who had tracked him to the airport and blocked his car (yup a Tesla!), and it was said the creep jumped on the hood, etc. Pretty awful stuff. (And woke lefties, this is actual violence. Saying men can’t menstruate isn’t violence, actually, as you keep telling us.)

The perp didn’t know Musk wasn’t in the car, just Musk’s little toddler son “X”. He was obviously freaking out. (Parents: can you just imagine?!) This was an example of what is clearly the grave daily risk Elon Musk lives with.

Musk’s driver took video of the event as best he could. The guy was a creep dressed in black, black hood, black mask, and coverings on one hand. (Thus my “ANTIFA” suspicion.)

Anyone recognize this person or car? pic.twitter.com/2U0Eyx7iwl

Last night, car carrying lil X in LA was followed by crazy stalker (thinking it was me), who later blocked car from moving & climbed onto hood.

Legal action is being taken against Sweeney & organizations who supported harm to my family.

It was soon after that tweet that the various TOS-breaching accounts were suspended. And no, hacks, it was not because Musk didn’t like being criticized.

Some “journalists” almost immediately began pretending none of that actual violence and risk mattered, nor that it might be driven by accounts literally creating that risk, and that it was really just Musk “censorship” based on the notion that Musk simply didn’t like those “journalists” criticizing him.

I actually think some were baiting Musk into suspending them so that they could go crying that Musk censored them.

It’s actually obtuse for journalists to look at it this way, more so that they are choosing to look at it that way and present it to the public that way, even though they know better. So it’s either ignorance, or it’s outright misinformation. I lean toward the latter.

All of the legacy media (including in Canada) is choosing to present it this way. Shame on them. Disinformation, misinformation, lying, smearing, call it what you like, but it’s really f-ing wrong. Dangerously wrong. Shockingly stupid.

There are any number of internet pages of regulatory explanation for those ever-so brilliant “journalists” who keep claiming that all jet-travel information is public, and so they ipso facto have a “First Amendment Right” to put Musk’s life at threat of assassination, and that of his son and other family and associates who might be with him. They’re wrong. Most know it, too, as I’ve said. They don’t care. NARRATIVE drives them. Their politics drive them. Hypocrisy? Pffft!

I’ve read the material, and I know they’re lying, so trust me or read the stuff yourself. Just don’t be fooled or lied to.

Musk’s jet is in the “private” category and the information on his jet or any other jet owner that asks for it, is not public. Aircraft in this category (called PIA – see below) are not identified in aircraft tracking sites. One has to extrapolate information from various sources in order to calculate Musk’s location, which is what the “journalist” in question was doing. The main culprit here has admitted on Twitter that it would require software to be written — which he contended he could write — and apparently did — in order to get that info.

Of course, it’s really a moot point anyway! No matter if it was public or private, you’re simply not allowed to blast out to the globe and to potential assassins, the real-time location of individuals, by posting it on Twitter.  It falls under the category of “doxxing” in the TOS, but under the category of “duh” to normal humans with an ounce of sense (or that famous “compassion” that liberals and lefties are so fond of reminding us they own).

This is one of the “journalists” who was suspended for violations, the guy running the @elonjet account (who once demanded $50,000 of Elon Musk to voluntarily remove his account, after Musk had offered him a good faith $5000 just to stop endangering his life by constantly posting his real-time location): 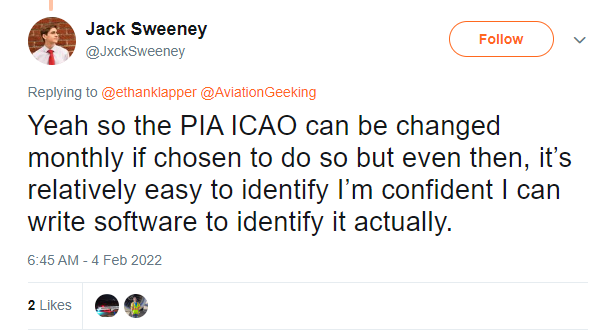 The Twitter TOS do not apply to, for example, rock stars who will be at a concert venue, or politicians who are traveling to political events (or anywhere else if they’d made it public, as they usually do). So, for example, anyone can sign up for Justin Trudeau’s daily itinerary (I get it, not to harm him, but more so to avoid him!), in which it is indicated exactly where he will be and at what time (unless he is going surfing on Vancouver Island and he wants us to think he’s working so he lies and says he’s “in meetings”).

And there are plane trackers tweeting in Canada (which as I’ve pointed out, I really enjoy!) which will tweet out the details of government jet trips, including how much fuel was burned, and how much CO2 was emitted. When the tweets are reporting historic location information, clearly it’s not violating anything. Blurting out the location in real-time, of private, named individuals is the problem. When tweeting out these details after the fact, it’s not revealing a real-time location, so the Twitter TOS specifically says it is allowed.

But even if it were tweeting out the real-time location, Trudeau is a politician going to a political event, and it was made public by Trudeau first, as I said. So no rules are broken there as far as I can tell. (And a P.S. — I haven’t seen that account tweeting today so I assume they’re re-evaluating their position. I hope they resume as long as they are following the rules. And let me add, I believe the account is meant to amaze us as to how much government jet travel is going on, which we wouldn’t know without this resource. It was never meant, as far as I know, to put politicians at risk, and nor does it, as best I can tell.)

In addition, Trudeau is a guy surrounded by numerous layers of national security personnel who have at their disposal a raft of security information in advance of any movement, with agents literally all over the globe and more so within Canada where he mostly travels, and pre-screening at every destination, which only national security-type people could have. He’s well protected.

That’s all you need for now, unless you’re stupid, but I’ll just leave this here because it surmises so much: 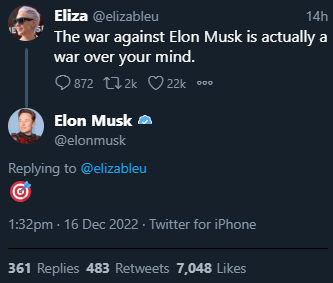 UPDATE: Sorry but I had to add this gem: 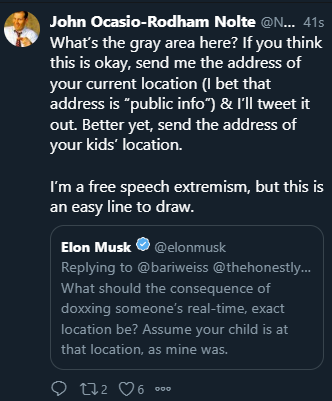 Oh God another one. I need a life. 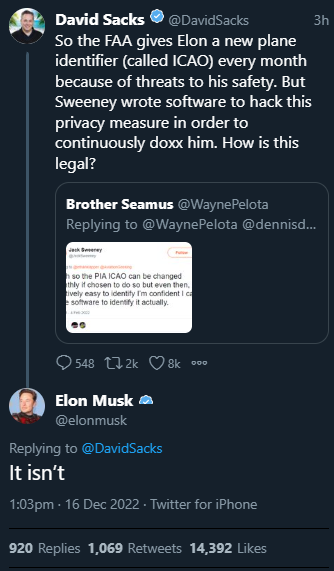 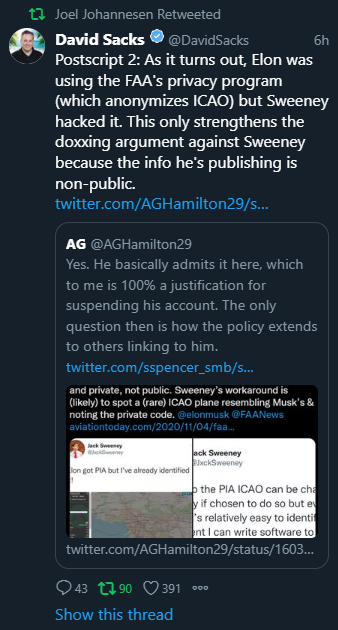