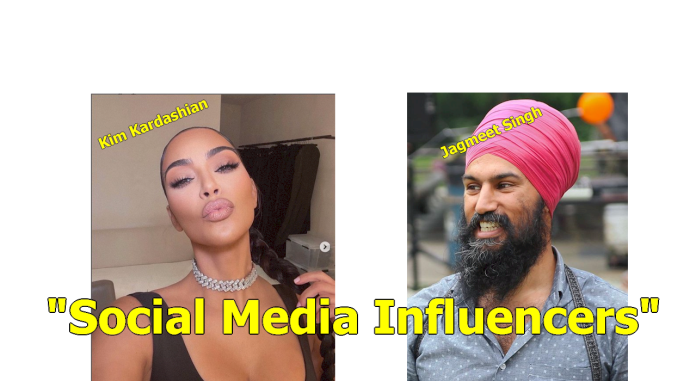 The state-owned CBC — which because I’m a normal salient human being I objectively see as a huge fan and big booster of Jagmeet Singh, his NDP, and anything else ardently socialist — actually called him out yesterday. This is news.

The CBC should really write another news article explaining to Canadians the news that they — the CBC — called out Jagmeet Sing. I imagine the story shouldn’t cost more than, say, an extra $400 million in taxpayer funding on top of their yearly $1.6 BILLION to write it up.

What’s not so shocking is that it turns out Singh is but another one of those — get the quotes right here — “greedy capitalist” “males” who “are privileged” and obviously “don’t pay their fair share in taxes” (etc., ad infinitum, to the point of puking). Sort of like Kim Kardashian but male and non-white, and just as big an ass.

Seems Singh and his wife accepted a gift of an $1895 chair (yup, one thousand, eight hundred ninety-five dollars) for their home. Yes, apparently in some world which doesn’t sound like most people’s world, you can spend $1895 on a simple frickin’ chair, somehow. But as we normals know, this sort of ultra-luxury item is only conceivable and available to those in the rarified world occupied by privileged rich elites like Jagmeet Singh and assorted other social justice leaders who seek to end all the income inequality ‘n stuff. Most of us shop at Ikea or Leon’s.

And apparently, people like Singh don’t even think twice about accepting such an expensive chair as a gift. Never mind that as I’ve previously written, Singh has literally been a BMW-driving, Rolex-watch-wearing richy-rich for his whole life (he was born into it), and he now gets, at the very extreme least, a $180,000 taxpayer-paid salary for all the great work he does in parliament for us colonizers. (Well apparently he gets that salary plus “gifts”!) He doesn’t need Canadians or Canadian companies to chip in and help support him, but what the hey, he’ll take it!

But of course that wasn’t really what this ever-so gently-written news item was about. It was worse. It was about Singh accepting the $1895 gift IN EXCHANGE FOR (or if this were about Trump, it’d be a “heinous quid pro quo”) a profit-making enterprise getting tons of marketing/advertising attention, using the Singhs as common “social media influencers” (think Kim Kardashian) via their Instagram account. Jagmeet Singh alone has 716 thousand followers, to say nothing of his wife’s following.

I find it interesting that a guy like Singh — socialist, anti-capitalist as he certainly makes himself appear to be, BMW notwithstanding — would even TOUCH an outfit like Instagram. Instagram, in case you weren’t aware, is a huge American company (“evil stoopid dirty american’s!#!!”  —to quote all leftists — punctuation errors intended in order to convey real life) which is itself owned by a more huge Facebook, which is a really great, ethical as all hell, fair and not left-wing at all, great for kids, fantastic American (!) company [insert world’s biggest eye-roll here]. And they’re mega wealthy capitalist monopolistic companies run by white men, too! Ewww!

Anyway, the Singhs both posted it as agreed, and held up their end of the, um, “bargain” which is not at all like a quid pro quo. Here’s the post, which, by the way, remains posted to this minute, despite the furor over its ethics. Note the “tag” he placed on the photo of himself in the chair with his baby, which potentially violates laws laid out in the Canadian Conflict of Interest Act:

They always say the crime is often found in the coverup. Well this isn’t a coverup because it never got quite that far. But the fact is, as it turns out, Singh took the gift, posted the post, but didn’t bother to declare this gift to the government authorities (—the very bureaucracy that he so adores and hopes to build fourfold!). Apparently only some rich only have to “pay their fair share,” and only in certain circumstances. Singhs don’t have to, cuz, special! Or to be fair and equitable, maybe all NDP leaders don’t have to “pay their fair share” like us plebs. I don’t know. Anyway here’s how the CBC story opened:

THe NDP says it is working with the ethics commissioner and intends to file a formal disclosure report on a $1,895 rocking chair given to NDP Leader Jagmeet Singh’s wife in exchange for posting about the item on her Instagram account. …

… On Sunday, Singh published an image on his Instagram page of himself sitting in the same chair cuddling his newborn daughter, with the furniture company tagged in the image. …

One tiny bit interesting aside, and trust me I recognize this is a really minor issue, but what the CBC also did — perhaps inadvertently or perhaps not (and that may be the more interesting angle) — is that they posted that same sort of screenshot as I did from my own cellphone, only the screenshot they captured happened to indicate the latest “like” — and it was from a rosemary_thompson. Look at the CBC’s version from their article:

If you’re as old as me, you might recognize the name. She’s Rosemary Thompson (only it’s typed with child-like punctuation found on most social media (no caps!), as is de rigueur amongst the cool-cats with blue-checks on social media for some reason). She’s a now-retired reporter formerly of liberalvision CTV.  She was deputy bureau chief of the parliamentary bureau for CTV News. You might remember her from “Question Period” and political shows like that. Don’t get me wrong. I’m sure she’s a perfectly nice person and has done no wrong.

There’s nothing inherently wrong with a former reporter “liking” an anodyne family-oriented post by an NDP leader. It’s not something I would do as a former political reporter if I was one. But “liking” something which pretty clearly betrays a commercial/political quid pro quo as this one does, is an unfortunate lapse and maybe just a lazy disregard for political propriety in the very field of study to which she devoted most of her professional life. I certainly wouldn’t “like” something that so obviously appears to be a callous breach of ethics, no matter who I am, and I’m a nobody.

At the very least, unsaid by any “news” media, and nor will it be said, is that Singh has (say it like you’re stoned on the pot) “sold out to the man, man.”

The Singhs, who apparently have to say sorry through a professional handler or spokesman not unlike the Kardashians, say “[T]they’ve realized their error and will be paying for the gift.” You needn’t send money to the Singhs.

P.S. From the archives: 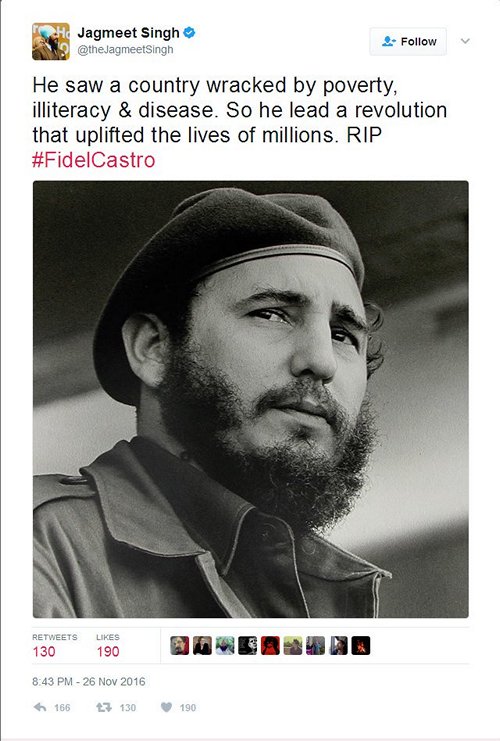 Previous article#feb1 is four days before my birthday.
Next articleTop Democrat suggests slapping women around if they don’t agree with your politics