I went through a purgation the other day when I tweeted my satellite TV provider with several of my gripes about their service.

Here’s a graphic (from today) of my TV screen representing what actually got me going that day. See how the description for Fox News Channel is “Nouvelles”? We have a word in English for that: WTF? 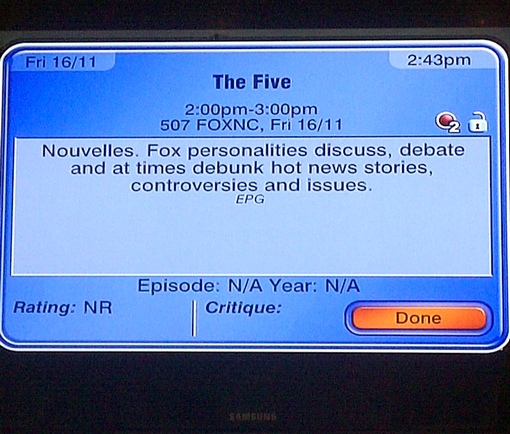 It’s been that way for years.

I admit I’m one of those people who swears whenever I’m trying to read the ingredients on a cereal box or trying to find the instructions on the side of one package or another, in Canada, and I always land on the annoying French side first, and have to flip it around to find the right side. Because, you know, I’m not French, and this isn’t France. But this “Nouvelles” thing is on the English side of the box, if you see what I mean.

Now, I know, you’re gonna say I’m being … well I was going to say niggardly but some douche (excuse my French), whom I guarantee will be on the left side of the political fence, will falsely and idiotically call me racist, so… niggling. Oh I see, OK, hang on…. a pettifogger.

Whatever. I’m none of those. I was just in a bad mood and sick and tired of the media running roughshod over …. yes, conservatives. And that notion is not to be trifled with, at least among us conservatives, as I pointed out in one of my recent articles.

As I tweeted out to them, it’s not just that “Nouvelles” things (which exists ONLY on the Fox News Channel description). There was more. Like this tweet:

…A legitimate question even if at first glance you mistake it for being more pettifogging or niggling. Think of how a person, who is after just a scan of all the news, surfs through the news channels. As a responsible and sane human, I only watch the high-def channels where possible, since I invested approximately a zillion dollars in wide-screen HD TVs and those expensive Bell Satellite HD boxes I’m required to buy in order to actually watch HD TV. Plus it just looks a thousand times better. So I up-arrow my remote thought the channels, hitting CNN, HLN, MSNBC, CTV News Channel, the dreadfully stupid state-owned and taxpayer-funded CBC News Channel, among some other liberal and leftist news media. They’re all in glorious HD. They’re all conveniently grouped together in the HD channel section of the Bell Satellite lineup.

What’s missing from my picture? Only two channels  —  which in my case happen to be my favorite channels on account of the fact that I also like to see what a conservative might think about the news, too: Sun News Network, and Fox News Channel. Both broadcast in HD, but aren’t made available in HD by Bell Satellite service. Only those two, alone, are available to me only in low def.

And so those two news channels are in the lower channel number banks, where I’m not. And so I don’t get to just passively surf to them, I have to punch numbers in, and moreover, abort the high-def realm I’ve invested so heavily in, and much prefer to watch.

Don’t worry, I do that extra work, because I’m also invested in the idea of being fully informed, and not just propagandized by the Left and their left-wing media biases. So I do remain smart, but as you see, I have to work harder for it, and not enjoy the experience. I think (and judging from the polls and recent elections), most people don’t bother doing that extra work that I do.

So I kept asking Bell through their Bell support Twitter account, and they either pretended to be ignoramuses, or they actually are. At first they tried to pass off their stock answer designed by marketing asses to appease the idiot masses, to wit, the likes of: “We’re adding new channels all the time.” Which I take as an insult to my intelligence, on account of it being precisely that.

At one point, the Bell “support” tweeter seemed to exhibit that they do not even have a full grasp of the company’s offerings, claiming, somewhat triumphantly it seemed to me, that in fact, having “investigated” the matter on their own, Fox is in fact available to me  —  in high-def  —  on channel so-and-so. They’d confused (purposely or otherwise) Fox News Channel with a regular Fox TV network channel.

I didn’t accept their insulting answers, and so like little girls who can’t win an argument, they just went away, apparently to hide under their desks, refusing to even acknowledge any more of my tweets. Nice.

They had no answer.

I’m left to wonder if all of this isn’t on purpose.

Are they purposely trying to marginalize Sun News and Fox News Channel  —  the only two really conservative-tolerant news channels, by sidelining them and confining them to the low-def morass? I have to think so.  I have to think that someone  —  possibly a whole cabal of them  —  over there are anti-conservative, and are trying to make it difficult for Canadians to see or hear conservative ideas or points of view.

They will deny it, as they already have, by way of some kind of “we’re adding new channels all the time” -type explanation. But given what we know about liberal-biased media and big-government-reliant corporate cronies, I think I have all the credible reasons I need to back up my suspicions.