Is the Conservative Party of Canada Anti Trump? 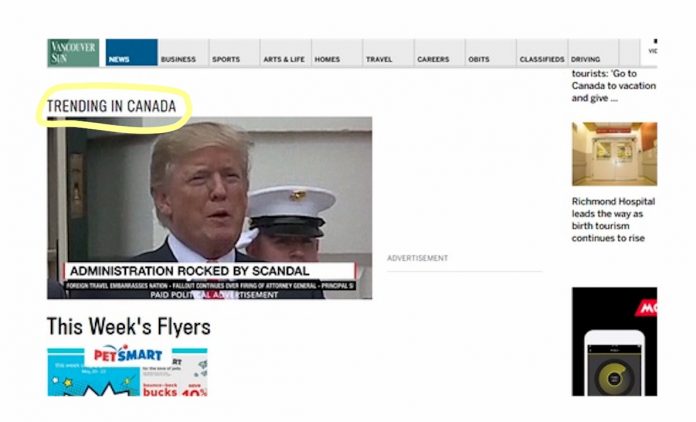 Brava Conservatives. You faked me out. With the help of my newspaper. Because that’s what good news media and political parties should do now. Fake people out. On purpose. Together!

It took me a second to figure out this was an ad, but then more to figure out what the hell this ad might be for (and yes it’s an ad, not an article, under what I now understand to be the fake news heading, “TRENDING IN CANADA,” in a newspaper which supposedly features serious news). This ad features Donald Trump in a ubiquitous scene, as if screen-capped from a cable TV news story, in which he’s being slammed for yet another thing. 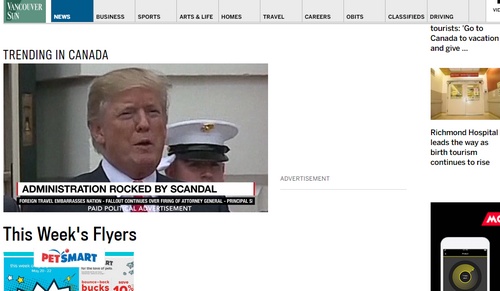 All Canadian and most American newspapers are replete with rabid anti-Trump “news” items exactly like this ad, every single day. They’re always “TRENDING.” So reader confusion is actually counted on here. They’re literally playing to your confusion, which they created after years of faking you out with fake news and totally biased “news” reports which look exactly like this.

And they’re playing to what is well-known by them to be great clickbait. Anything anti-Trump is great clickbait for them. They love it. Just read the papers!

Bite the bait! Click it and it leads to a Conservative Party-owned website. Surprise! On it, the accompanying video makes conservatives breathe a sigh of relief. It’s not actually anti-Trump (surprise again!). It’s pretty good. It’s one of those trollish fake-out scripts in which you make all manner of awful claims against a guy who constantly gets slammed (Trump, duh), only to pan over to Justin Trudeau and reveal that you were actually talking about him all along. Watch:

Good on the Conservatives for playing to the fact that there’s so much fake news in media today that people will fall for this, thinking it was a news article; and that there’s such an appetite among the left for even more anti-Trump screeds in the news or ads, that they calculated this ad would successfully clickbait them. The libs and leftists are who they need to address, so it’s honestly a good tactic from that standpoint.

Who did you expect to place an ad like this? Probably not the Conservative Party of Canada. Maybe CNN’s Russian Collusion Hoax desk. The Beto O’Rourke Democratic campaign. The Open Borders ‘N Free Immigration Society. The Anti-Israel League of America? The ‘Democratic’ (wink!) Socialist Party USA. MSNBC. CBC. The Ban All Guns In America PAC? The Teachers’ Union. The Free Abortions For All organization. The Green New Deal ‘N Ocasio-Cortez for President Club. The Liberal Party. The NDP. The Greens.

I’m just not sure this was the best execution because if you don’t click, it backfires on them and hurts their cause with more anti-Trump, and possibly anti-conservative memery.

GREAT EXAMPLES OF THIS TROLLISH TECHNIQUE
The script has been done before so it’s nothing new, but it’s pretty powerful. Usually a “reporter” — actually an undercover conservative advocate — quotes various Trump statements to random people on the street, and awaits their entirely predictable reaction. “Terrible!” “Racist!” “What a fascist idiot!” “Divisive!!” But then he tells them he was actually quoting Barack Obama or some other Dem, and awaits their shock-face reaction. Priceless teaching moments for all. Here’s a couple from Campus Reform, which is not a newspaper: