Is progressive Canada getting ready to crush political dissent? I don’t know how else to read this. 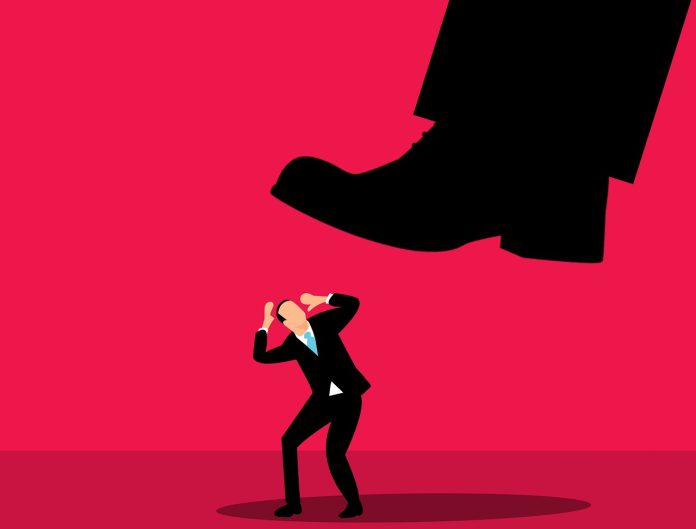 I grant you the news was reported by a reporter from the Trudeau Liberals’ Globe and Mail division, so “grain of salt” and all that. But despite it sounding like another over-torqued screed from the blinkered leftist mind of Jagmeet Singh or one of the women on The View, it has to have at least some credibility because the reporter paraphrases and quotes Canada’s national security and intelligence adviser, Jody Thomas. Note that he paraphrases and quotes, but doesn’t appear to challenge or question the stupidity of her really rather dangerous and fraught remarks.

Andrew Breitbart famously said “politics is downstream from culture”; and I would think policy derived from national security intelligence is downstream from what Canada’s national security and intelligence adviser advises. And at the very least that advice projects what Canada is about, and where it is going, so it matters what she says. A great deal. Words must be chosen carefully.

She is quoted in the article as saying, “The people who organized that protest – and there were several factions … there is no doubt – came to overthrow the government.” 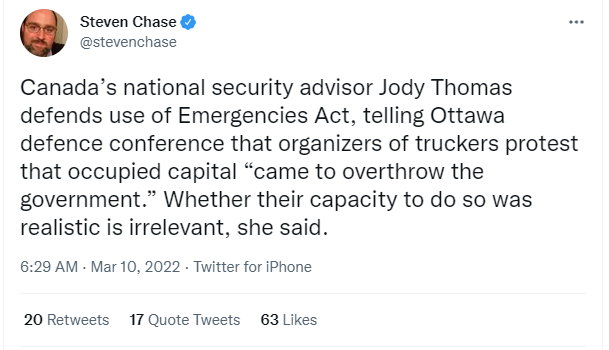 It’s not even equivocal. There is no ambiguity. It’s definite. It’s like “the science is settled” but at an order of magnitude more stupid and unscientific, and more existentially dangerous for our country. She literally said, “there is no doubt – [they] came to overthrow the government.”

There is no doubt? I have grave doubts.

But let’s play dumbass here for a moment and test the logic: Even if “they” did “no doubt” come “to overthrow the government,” then logic, to say nothing of peace, order, and good governance, dictate that your next step, as a responsible adult and someone in charge, is to very carefully, soberly, fairly, evaluate the actual threat that this legitimately represents to your nation — before one says something outlandish, or goes so far as to invoke serious, ruinous, draconian, historic breaches of Canadian freedom and democracy, as they (no doubt) did.

If the nation of Barbados (or to make the example more accurate, some unknown grievance-ridden underlings in the Barbadian civil service) threatened to “overthrow” Canada, that’s an awfully stupid and unserious threat, and except for those high on pot, nobody would take it seriously. Obviously. Well obviously to me anyway. And upon careful review of the threat, I would recommend Canada not launch its fleet of bomb-laden CF-18s (assuming any of them still work at age 35) and fly them over Barbadians to scare them off the beaches. I’d probably just write a sternly-worded email to them and call it a day. (Or hold a sign with an awesome hashtag on it like #IStandWithUkraine). Because it’s not a real legitimate threat.

But to Jody Thomas, that doesn’t matter! “IRRELEVANT!” She said, “Whether organizers had the ability to overthrow the federal government is irrelevant.”

I have to include a screencap just to prove I’m not drunk and she actually said that.

But now note this: Jody Thomas is the former deputy minister at National Defence. Since her predilection is to invoke Defcon One and the emergencies act against CANADIAN truckers and their myriad CANADIAN supporters with an obviously legitimate and rather popular, and pretty damn peaceful protest — whether or not there is a real threat — I’d hate to see her advice if a couple of unknown guys and gals in Barbados did go rogue and spew a bunch of nonsense. Or you know, Russians, or North Koreans, who never say anything stupid. Because whether or not there is a real threat, you have to go ballistic. Right?

Woke leftists with their “Down with the colonizer Canada” is now a national security threat worthy of military intervention, jailings, and financial freezes, among other life-ruining things, according to this dictate, right? BLM’s “Destroy the nuclear family!” and “Defund Police!” and “End Capitalism!” is now a heinous threat, right? And BLM and the woke leftists and climate crusaders, et al, have had far, far more of that apparently nefarious foreign funding than the truckers ever dreamed of, so what… nuke ’em all?

No, evidently, that is not what they’re really thinking at all. These “threats” are judged by a far more politically selective criteria than that, aren’t they? It’s not about national security at all, it’s about politics and their own political security.

I can tell you as a normal sane and sober Canadian who isn’t dumbed-down by listening to the torqued uber-woke Nazi-finder Jagmeet Singh, or watching too much state-owned CBC or The View, that 99% of the people protesting or supporting the protesters financially, or in person, or just in spirit, don’t know who in Hell the so-called “organizers” were, nor what their specific intentions were, and most certainly weren’t enthralled by any notion of “overthrowing the government.”

I certainly voiced my support for the trucker’s freedom convoy here at PTBC (though my support was limited strictly to legal peaceful protest, not illegal blockades or occupations or such), and like everybody in the world that I know, I have never in my life heard of any one of those “organizers,” nor did I know or care about or agree with or even understand what in tarnation they were on about when I did find out about them, which was naturally through the numerous breathless “news” reports in Trudeau’s various “news” media divisions, what with their dire warnings of Nazis and racists and misogynists in our midst (or was that Trudeau? It was both actually, and Jagmeet Singh, natch).

Normal people cottoned onto a general theme of righteous push-back against what was clearly an enormous — and seemingly increasing — government overreach, and only after first being freakishly obedient and cooperative and docile for the past two long years. The protest was itself typical Canadian: docile! Not very coup d’état-like eh. But again: doesn’t matter. “Irrelevant!” “Whether organizers had the ability to overthrow the federal government is irrelevant.”

The problem here is that Jody Thomas and the other progressive government tools did not evaluate the actual threat that this actually represents to the nation, they evaluated it as a threat to their politics and their political parties. That’s why they didn’t remove — and still haven’t — the ridiculous vaccine or mask mandates despite the obvious scientific evidence which allows them to do exactly that. And that’s why they reacted the way they did. It was a threat to their sense of entitled elitist right of power and control over regular Canadians, and a threat to their political, electoral fortunes. That mindset is what’s truly dangerous.

And I think Canadians will see this, too, for what it is. And yes, I do think the government should be summarily “overthrown” — in the next election, duh — and replaced with a good conservative-minded government that will then immediately fire at least half of the civil service bureaucrats, including Jody Thomas. And no, what I just said is not a national security threat, it’s a serious, emergent observation and sound advice.