Instead of letting the Sun shine in: Wells of angst.

…What Maclean’s magazine’s Paul Wells currishly sniffs as being “[T]his interminable Ezra Levant monologue…” is what I thought was some of the most entertaining and succinct total take-downs of two more liberal-left politicians, in ages. Ezra’s so-called “interminable monologue” was the perfect setup for the take-down. It was good TV, and fantastic, important, information.

Therefore the liberal media mavens will sneer at Ezra Levant. Oh look, one already did.

It’s not monumental or epic, but the sneering from the 39,000 tweets Paul Wells points to what’s really up, here, which is the increasing and increasingly obvious distaste, or even anger, from the Canadian liberal media establishment, directed toward Sun News Network and Ezra Levant (and in fact all of the others at Sun, except the left’s buddy Warren Kinsella and other liberals, whose presence at Sun News they simply cannot or refuse to explain).

What’s happening here, as we see here from Wells, even if he has to add a cheap sneer to it, is that mainstream media journalists are being forced by the new reality to begrudgingly acknowledge  —  admit  —  that Sun News is doing what they in the liberal mainstream media have failed to do. Canada’s old dinosaur mainstream media has failed to provide the whole story, including the extremely important concept of allowing conservatives to say things in public without the usual ridicule or visible sneer from anchors or reporters. On TV, prior to Sun News and the un-bannning of Fox News Channel in Canada, Canadians had only ever heard the politics of the left, countered only by the politics of the far-left. The media knows this, and is not happy about the turn of events.

In fairness to Wells, who wouldn’t sneer after being outed like that?

The other thing that is so terrifying and annoying to mainstream media is that Sun News is obviously on to the rest of the media itself, particularly the state-owned and far-left CBC. It’s not just liberal politicians they fully expose, it’s their liberal media too. That’s gotta hurt, when you’ve had control of the minds of Canadians lo these many years.

Exposing the truth and bringing a conservative point-of-view into the mix causes this liberal media angst. Or even hate and rage. You’d expect journalists to appreciate the truth, on account of it being their freaking job. Trouble is, the liberal-left mainstream media is corrupt.

For example, it’s not (as you’ve been told by liberals and their media) as if Ezra Levant or anybody at Sun News is telling lies about liberals, or about the liberal media, for that matter. Sure there’s some political analysis and conservatives opinionating, but what’s bugging the liberals is that they’re telling the truth.

Liberals don’t care about lies; it’s the truth that they hate and fear so much. They are attacking the concept of the TRUTH being told. 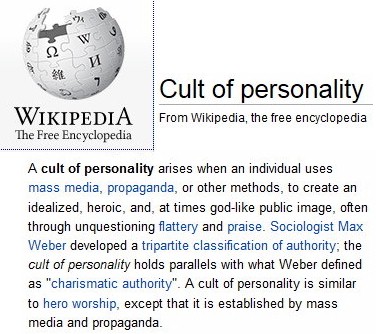 (or as they call new federal liberal candidate Chrytia Freeland, a “star”), and moreover, a liberal.

Liberal is the key word here.

The liberals in the media long ago cottoned on to the idea that they could elevate liberals like Freeland to power, using the same principle they’re employing to gift power to Justin Trudeau: by raising the cult of personality.

This is tactic is particularly effective when applied to the low-information voter.

Freeland is an excellent case in point. The liberal media glibly attach the word “star” to her name, even if virtually nobody, including even me in all my vast awareness and overall brilliance, has ever heard of her. Repeat it three times, and by golly, we have us a “star.” They then over-glamorize her education or over-hype her “vast” experience and knowledge and her supposed concern for the the middle class, laud her at every opportunity, constantly trash the opposition… by golly, we now have us a cult.

The unfiltered reality is that Ezra’s report  —  including the excellent monologue  —  was effective. I went in thinking Freeland was a force to be reckoned with, and came out thinking, my God, what a dolt  —  what a dimwit and a lightweight. For Canada’s sake, she must not be elected. And he did it by letting Freeland and Trudeau mock themselves, by broadcasting video clips of Freeland and Trudeau speaking on their own videos. It was literally funny. Well funny and surely embarrassing for them.

Nobody else in the media broadcast that very revealing clip, in that way, because they know it made a mockery of Trudeau and whatever it is he stands for; and Freeland. The liberal media reserve that treatment for conservatives. Take Sarah Palin.

It was available to other media, but they just ignored it. Actually they hid it. On purpose. I mean for example, Paul Wells never brought it up. Doubt he’ll write about it at Maclean’s either. He never tweeted about it in his 39,000 tweets. No, instead, this journalist chose to tweet about Ezra’s supposedly loquacious report about it.

I’m no sycophant or a paid spokesmodel for Sun News Network, even though I have the looks, but the fact is, I am glad I saw that Ezra Levant/Sun News clip  —  otherwise I’d be armed only with false knowledge  —  from the usual sources.

Honest and open-minded Canadians should embrace the likes of a Sun News Network and Fox News Channel in this country  —  otherwise most of us would continue not knowing the truth and the whole story, and we’d keep making mistakes. Trudeau, for example.

Previous articleBlogger whacked in head by big huge rule
Next articleFord: taxpayers being played is job one?