File this under “you had one job.”

Canada is now solidly amongst the worst in the world in government’s number one job: getting its people vaccinated. We’ve now dropped to TWENTIETH in the world, as of today. In case you’re stupid, 20th is also known as a horrible failure. Even at #9, “Top Ten” has a ring to it. But #20 is simply losing. That’s why none of Trudeau’s news media division is actually reporting our twentieth-place spot on the global ranking today, and I had to find it myself.

Aside from being #20, the additional news comes from an article about that very weird “Canada-China vaccine collaboration” as they’re calling it, and as if it’s even a normal or acceptable for a democracy to collaborate with the murderous slave-nation dictatorship of kidnapping human-right abuser, communist China. Others like me quite rightly call this collaboration “a deal with the devil,” inasmuch as the communists of China are, in fact, evil.

Back in August the news media reported that the deal, first announced in May, had fallen apart.

August is also known as “three months later” than May. I imagine the embarrassing news was acknowledged, even then or at all, only to get ahead of an impending news leak about it which would embarrass them, if in fact they are capable of that, and if in fact their news media partners didn’t simply cover for them.

But today they report that they learned that the infamous China deal began to fall apart literally three days after Trudeau announced clinical trials last year, when Trudeau obviously jumped the gun and made the huge announcement —which quickly backfired and turned into complete garbage. Or as Globe and Mail gingerly put it today, “Canada-China vaccine collaboration began to fall apart days after Ottawa announced clinical trials.” (For those of you who don’t speak Trudeaumedia, “Ottawa” is used in place of “Trudeau” whenever Trudeau or the Liberals fouled-up.)

“Ottawa” knew back in May that the deal was crap. “News that the Canada-China collaboration on the CanSino vaccine had been abandoned wasn’t made public until late August,” says the G&M today, like a scorned lover.

But they’re not out of love yet. They simply state that ugly fact, ignore the “Trudeau transparency” lie, then move on. It’s really pretty remarkable how forgiving they are.

But back to that date in August, when they finally acknowledged the massive failure. See how it dovetails with this other pretty shocking story: Click to watch the CTV video. (And note CTV chiron below THE PRESS GALLERY which states “PM Trudeau says Pfizer shipments remain on track despite temporary delays” as if to counter what is being said on the video, and run cover for their guy.) 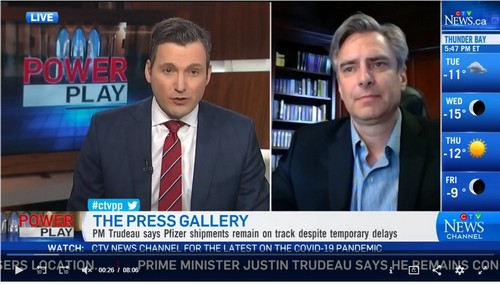