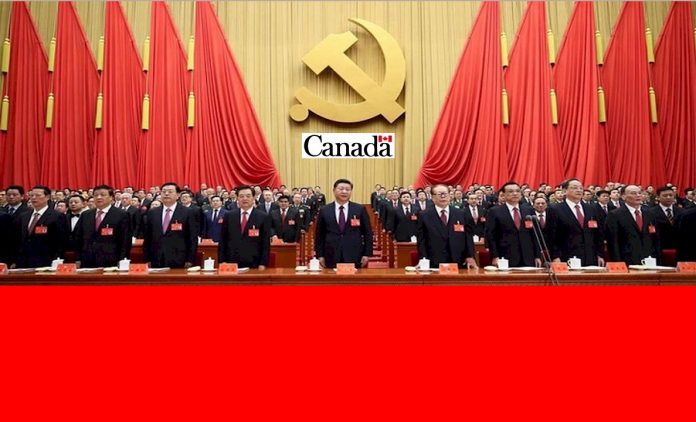 China is increasingly being called-out for its enslavement of its millions of Muslim Uighurs; and their imprisonment, internment camps, forced sterilization, outright killings, political re-education camps, forced abortions, and forced political indoctrination, among other abhorrent things.

China been named a genocidal nation — first by the Trump administration and then quickly confirmed by the new Biden administration (which must have snapped a lot of maniacal Opposite-Trump necks in the media).

Yet the Globe and Mail reports, “In response to the U.S. move, [Canadian] Foreign Affairs Minister Marc Garneau stopped short of saying Canada will follow the U.S. lead and make the same declaration [of genocide].”

Justin Trudeau didn’t seem to have such reservations about calling Canada “genocidal” in 2019.

Luckily China is being watched carefully by more serious people who do worry about China — specifically and more accurately its villainous Communist Party — rising up as it overtly and openly desires to do, to become the world’s sole great power. I worry about what its plans are for me and my country, but given the evidence, one can only imagine what its specific plans are for Muslims the world over. You’d think Muslims and their very vociferous Trudeaupian “root cause” seekers and defenders would be more vocal about that.

Any person, government or company that continues doing business in China, is tacitly supporting Genocide. This does put paid to the claptrap of virtue-signaler extraordinaire, Canadian PM Justin Trudeau (and his UN acolytes) who reduces himself by calling his own country a “genocidal nation” for its treatment of indigenous peoples in its earlier history.

Does Trudeau expect all nations to stop dealing with a “genocidal” Canada? Does he warn them? Does he advise companies like Apple, Amazon, GM and Ford of Canada’s genocidal past before they set up or expand a factory here? Of course not. That pronouncement was just another massive exhibition of extremely ill-considered woke performance art designed to appease his leftist base and burnish his street-cred among useful idiots around the world. The situation in China serves as yet another giant “red pill” or “get real pill” for Trudeau and his woke comrades.

Trudeau won’t call them genocidal, and has only gone so far as to warn Canadian companies to not use Chinese slave labor —But you know, go ahead and deal with the Communist regime that engages in genocide, y’all!

It’s worth reiterating the stupidity and dangers to Canada of Trudeau casting about the “genocide” declaration about Canada, while procrastinating about the vastly worse China. We’ve already seen the Americans are ready to sanction China for its genocide. And now for example in the U.K. last week, an amendment designed to slap China and its genocidal nature was just narrowly defeated, 319 to 308. If passed, it would have forced Britain’s government to revoke bilateral trade agreements with nations declared to be “genocidal.” Read:

“U.K. Prime Minister Boris Johnson defeated a rebellion by his own lawmakers on Tuesday after they pressed for British judges to be able to rule if China’s Muslim Uighur minority is suffering genocide.

“The House of Commons narrowly voted down an amendment to a proposed law on international trade agreements which would have allowed victims to ask the High Court in London to rule on claims of genocide against potential trading partners, including China. The government would have had to consider pulling out of trade deals with the states involved.”

“The move had earlier passed by a majority in Parliament’s upper House of Lords, and had the backing of all opposition parties and a significant number of rebel Conservatives. Leaders from Britain’s Jewish, Muslim and Christian communities also supported it.”

Close call. For Canada, I mean. Trudeau must have breathed a sigh of relief amongst his other repeated breaths. Trudeau’s media division too, as I could find nary a word about this U.K. vote in any of his beloved Canadian news media. It’s clearly embarrassing for all of them, of course. After all, the U.K. and other countries could stop doing business with a genocidal Canada, but how could a Trudeau-led Canada ever even discuss restricting trade, business, and travel with the Chinese Communists on the basis of their being genocidal, when he is the PM of a genocidal nation? A Trudeau-led Canada can’t. So the news media — which backs him up in every way it can — just don’t cover the story, apparently.

They’ve all gotten themselves into a giant pile of woke shit of their own dumping. And together with Trudeau’s puerile performance art and virtue-signaling, they’ve placed Canada in an utterly ridiculous position on the world stage.