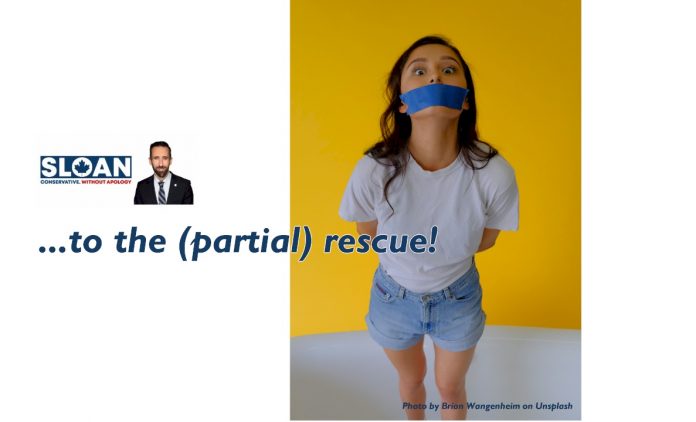 Among other good and bold things with which I agree, Conservative Party leadership candidate Derek Sloan has said it is his mission to enforce a rule that federally-funded universities and colleges (that’s nearly all of the universities and colleges in Canada) welcome free speech on campus. This would be in defiance of the current, well-documented model — an almost complete intolerance of conservative, or even libertarian or traditional-minded speech on most campuses; which for some reason that I cannot explain, Canadians seem to be totally cool with.

“This is why I’ll make federal grants to universities conditional upon proof that all recipients respect free speech and inquiry on campus.” —Sloan email, Fri, July 10.

Good on him. But free speech is merely the most visible form of intolerance and liberal-leftism on campus today.

I’ve documented the problem on campus as a much, much larger one. As I wrote just this past week, in the U.S., the ratio of Democrat over Republican professors was recently measured at 13-to-1. That’s up from 5-to-1 just a few years ago. This is a construct of an academy administration that is, clearly, increasingly dominated by leftist activist thinkers as well.

In other words, administrators, their faculty and staff, and their student body, are totally sweeping out any vestige of conservative thoughts or ideas on campus — not just in their campus theaters during what used to be called free-speech events. Their aim is clearly to vanquish anything but leftist thought. That’s pure left-wing totalitarianism — a strong word, but accurate. A look at the numbers, and at the graduates, amply demonstrates just how this successful their cleansing has been over just a few short years. And the cleansing is gaining speed, as far as I can tell.

In Canada, I figure, just based on my own experience, that the ratio is far greater than 13-to-1. It’s more like 20-to-1, I would guess. Alas I don’t have any hard data which “97% of scientists agree with,” to back that up.

I also wrote that the course material at universities and colleges has become more and more replete with left-wing social justice courses, seemingly designed only to produce more social-justice warriors and radical left-wing activists. We’ve also seen how this has been successful — just listen to most leftists and even moderate liberals today. Watch the news. Watch CNN. Go to court. Watch sports. Watch any TV. Visit Amazon.com.

We’ve seen the lists of courses available today. They’re hideous. And even within tradition coursework like history or literature or political science, the bias is hard left and often revisionist. Many conservative students have documented some of the extreme bias in the classrooms, and worse, the severe academic penalties they’ve endured, for not adhering to the leftist orthodoxy being foisted on them by faculty, administrators, and the well-taught bully student mobs and thugs. Just ask Jordon Peterson and his assistant, Lindsay Shepherd. Or me.

This is all something that should be concerning to all Conservative candidates but moreover, to all liberals and all conservatives; and anyone who values democracy. Nobody on the left actually wants a left-wing, one-party totalitarian state, do they? So why are we building one from the ground up; why are we letting this happen? With our money.

So when Derek Sloan hits only that one precise problem on campus today —free-speech, that’s great, but he’s missing most of the point. The problem is far bigger, and much more deeply rooted, and much more important than he may even think. He’s ok with that current 13 to 1 (or worse, here) liberal over conservative ratio among its taxpayer-funded faculties? OK with what has become a near total domination of the administration body of the taxpayer-funded academia by activist leftists? The obviously left-wing biased and often revisionist curriculum? People of all political stripes must know, even if only in their quietest moments, that this is all deadly wrong.

It’s extremely important, because I think universities and colleges are at the root of much of the — what do we call it, certainly not “right-wing” or “conservative” or even “normal-people” — activism going on around us; the protests here and the rioting mobs down south, and the cancel culture mobs everywhere today. We need to churn out fewer single-minded left-wing radicals and militants like them, and far more open-minded free-thinkers, and dare I say, conservatives and right-thinkers. Obviously.

My concern isn’t for the future of “conservatism.” I actually think these radicals, on and off campus, unwittingly encourage some thoughtful people to take a look at principles which align more closely with their more moderate nature, their admiration of our history, our traditions, our Judeo-Christian values, and free market capitalism, all of which built our country into one which they love, and which attracts other people from the world over. And herein you can see the problem: it has become increasingly difficult to ensure they’re even “allowed” to find the information; to hear it, read it, or openly discuss conservative principles in this utterly intolerant — some say outright fascist — culture that the left has fostered. And they’re not done yet. They’re still doing it. Largely on our dime.

So no, it’s the future of democracy, and of the country —that I worry about. I know Derek Sloan does too.

UPDATE:
I should note that today, candidate Erin O’Toole also affirmed his plan to guard against the loss of free speech in universities. He wrote in his email today:

“Cancel culture has spread from our universities to the broader society. … Conservatives increasingly live in fear, knowing that they will be punished for expressing conservative ideas. They live in fear of being punished through bad grades, though campus disciplinary action, and even though losing their job.

The voices of those who don’t conform to the left are being silenced.

It’s time for a leader who will fight back.

I’ve long spoken out against cancel culture and as Prime Minister I will take real action to:

Previous articleWE need the Liberals to do a bowel cleansing
Next articleAlberta labor union boss compares Alberta premier to Hitler. Remains in job.