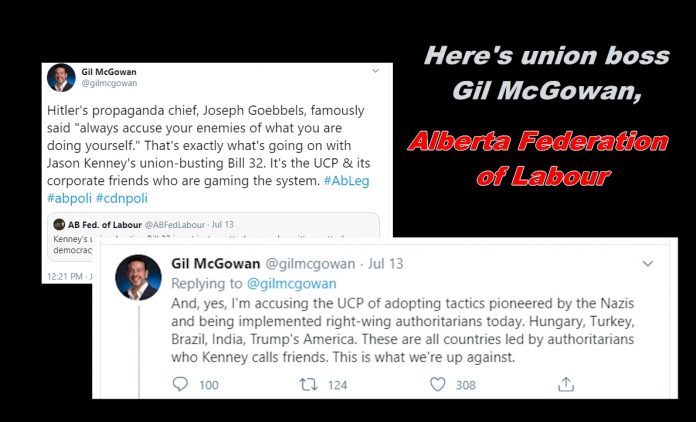 A labor union boss in Alberta has apparently been hiding under a massive union-made rock, and somehow missed all the lessons taught in fourth grade about Hitler comparisons. Here’s Gil McGowan, president of the Alberta Federation of Labour, on Twitter on Monday, demonstrating his ability to at once be offensive, tone-deaf, and utterly stupid at the exact same time:

“Hitler’s propaganda chief, Joseph Goebbels, famously said ‘always accuse your enemies of what you are doing yourself.’ That’s exactly what’s going on with Jason Kenney’s union-busting Bill 32. It’s the UCP and its corporate friends who are gaming the system,” McGowan wrote.

Just to be sure we didn’t misunderstand his intent, he plodded on:

“And, yes, I’m accusing the UCP of adopting tactics pioneered by the Nazis and being implemented by right-wing authoritarians today. Hungary, Turkey, Brazil, India, Trump’s America. These are all countries led by authoritarians who Kenney calls friends. This is what we’re up against…”

Wow. Aside from the Hitler hole he dug himself into, he just had to add the left’s other favorite political piñata, “Trump’s America.” What a doofus. And notice he didn’t mention North Korea, Cuba, China, Venezuela, and other places suffering from actual communist or socialist authoritarian dictatorships. 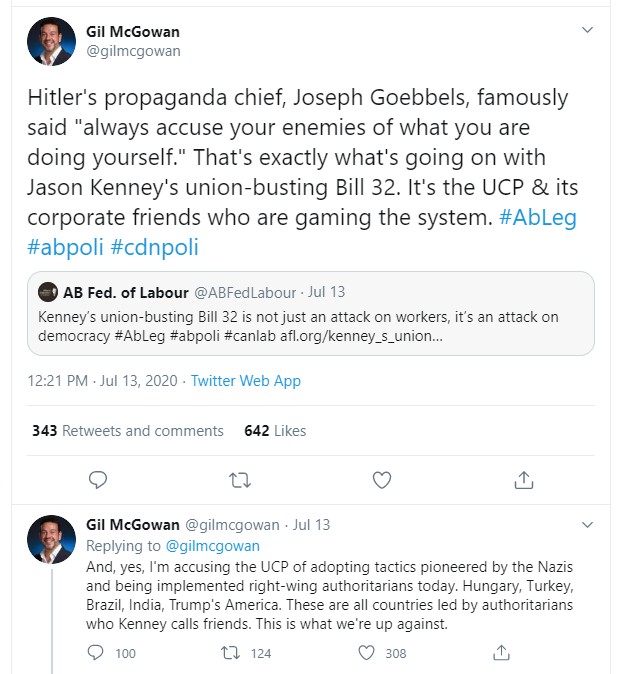 The biggest and most blatant irony is that the Kenney government (a duly-elected, democratic government, abiding by peaceful, orderly, democratic rules) is peacefully and properly advancing what is an inherently democratic, un-authoritarian bill, which gives union members a choice on whether their wages are to used by the union for political purposes (which they currently are). The bill actually advances democracy to union members; it advances liberty and freedom —in every conceivable way. If it ends up harming the leftist union and their leftist causes, well, that’s freedom in action. Obviously.

Gil McGowan is just as obviously against that. Against extending freedom to his members. All union bosses are against that. The NDP is against that too. The current law is the only thing that is remotely “authoritarian” and “undemocratic.” But they all seek to maintain that law whereby the free will of union members is diminished, rather than enhanced. This is inarguable. The only argument that remains is whether you support having your freedom whittled away like this. If you do, learn to call it what it is. And no, it’s not called “freedom.”

It’s also quintessential gaslighting. McGowan’s risible opening salvo is so gaseous it stunk-up my own computer monitor: “Hitler’s propaganda chief, Joseph Goebbels, famously said ‘always accuse your enemies of what you are doing yourself.’” Gil McGowan is obviously doing precisely this, calling Kenny’s move “authoritarian,” when it is actually the precise opposite of authoritarian; forcing union members to support politics that they don’t support is, in fact, the authoritarian move. But to then use the very Goebbels remark against Kenney in an enormous farce of logic, well, this is the stuff of a true master bullshitter.

Finally, there’s Godwin’s Rule. Most adolescents know this rule. Anytime anybody in an argument calls a perfectly normal human being “Hitler” or “a Nazi,” it is literally another way of saying “I’m stupid,” and “I am an unserious person,” and “I have no sound, viable argument to offer,” and “I am bereft of reason,” and “I concede defeat.”

His union members cannot be proud of this. Especially since they pay this guy’s wages. Still. Today.

By the way, have leftists in the NDP leadership and union people the nation over condemned and separated themselves from these remarks? Of course not. The Edmonton Journal quoted an NDP spokesman saying they were “too busy.” Too bad the union members still have to support the NDP financially through their union. (Still today, at least until this pro-democracy freedom-building bill is passed by the peaceful and orderly democracy currently taking place in Alberta.)

Jewish organizations are up in arms of course, because the remarks are a terrible slur on them and their history, and diminishes actual Nazi atrocities against them, reducing it all to just another opportunity for crass performative political sloganeering by another leftist union boss, but since the left doesn’t even care, he will get away with it. Jews will again suffer the consequences. Gil McGowan is still employed, the tweet remains there, and many comrades have — quite apart from demanding a retraction or apology — in fact defended what he said and added other iterations of it.

Why? If the UCP want to stop being compared to fascists, they should stop doing fascist things.

Think he learned that from Trump, but Trump learned it from The Nazis so guess its a moot point. Lol.

Previous article
If free speech were the only problem, Sloan said enough.
Next article
The Liberals’ WE division is also supported by these Conservatives (or “Conservatives”)