Memo to Conservative Party leadership contenders: The obsequious (and now-hidden) past behavior of supposedly conservative politicians to causes known to be liberal-left or progressive —is soul-killing to actual conservatives.

A Conservative Party leadership campaign email from candidate Peter MacKay last week, blasts Justin Trudeau and the Liberals for their alleged corrupt behavior vis-à-vis the WE organization: “He is implicated in the transfer of a $910 million government program to a private organization to which he, his mother, his younger brother and his wife are intimately and financially connected. A private organization that regularly provides Trudeau with a platform to fashion himself as a celebrity.” —my bolding).

Then almost immediately I am once again crushed by facts. I see this look back at 2018 in my Twitter feed: 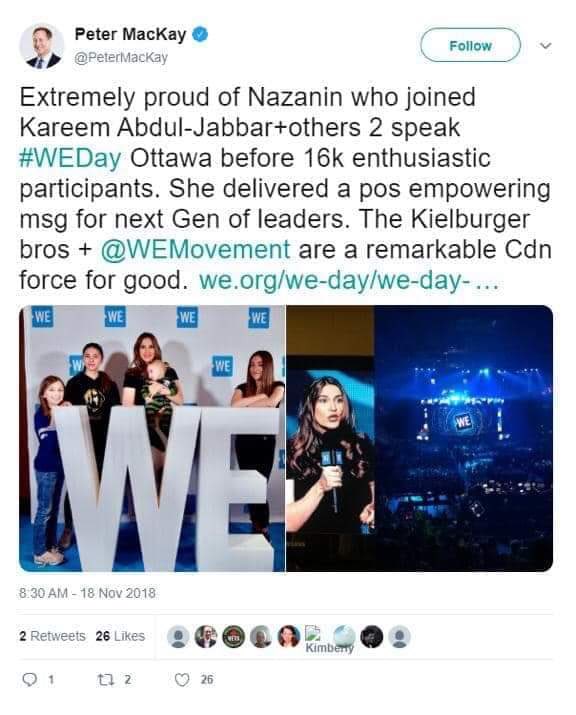 In this case it was MacKay’s celebrity wife. I don’t suppose she was paid, not that it would matter since she certainly wasn’t in any government position, and McKay wasn’t even in government at the time. Nonetheless, MacKay is “proud” of her celebrity involvement and opportunity to enhance her celebrity image with other celebrities, one of which he named because… celebrity.

His “pride” resides in his wife personally, no doubt, but also has to be in her being associated with what is a known liberal entity — one which has on numerous occasions openly supported Justin Trudeau politically before this event and after (and, as we now know, vice-versa) — and which always touts an obviously liberal or progressive overall message. It is telling to me.

As Maxime Bernier tweeted last week (and credit to him for tweeting the O’Toole and MacKay tweets accompanying this article), “The WE Charity has obviously been working for years as the propaganda and recruiting arm of the Liberals among young Canadians, promoting leftist causes with government money. And the weak Conservatives, afraid to look politically incorrect, just played along.” As I said in Twitter, Bernier’s not wrong.

And here’s Erin O’Toole blindly advancing the liberal cause by assisting the liberal-left’s WE organization, seen by me right after his similarly denouncing Trudeau’s corruption in it: 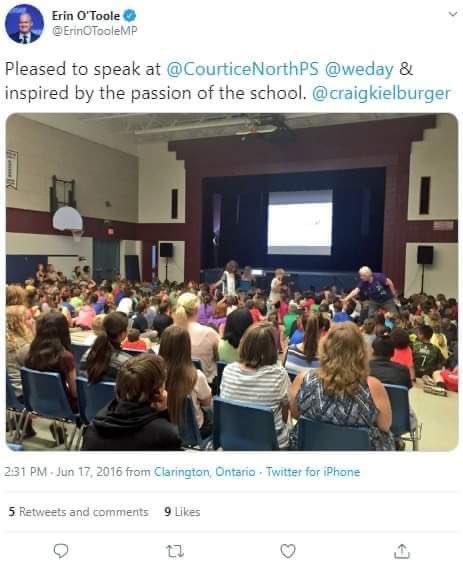 I do not understand some Conservatives’ constant expressions of fealty to the left or progressive causes, their myriad marches, protests and their massive cultural advances. But as our Ann Coulter said this week on Twitter, “Whenever Republicans need our votes, they’re bellicose opponents of mass immigration. Then they get elected and dedicate themselves to importing millions more low-wage immigrant workers.”

I see the same thing here only twofold.