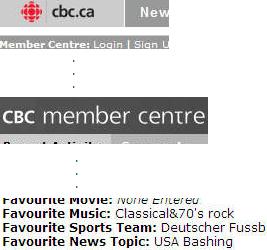 And since it’s in the news (sort of, and only there), congratulations on the increasing success in Iraq!  Unlike liberals in Canada and there too, I hope you win.

But before I get ahead of myself, no Canadian proclamation is complete without one of us apologizing for one thing or another in the most public way possible, so I’ll do one of those, my way:  I’m personally sorry on behalf of our country that we couldn’t be there to help you in Iraq as we should always have been.  Don’t worry, we’ll be there when it’s time to reap the benefits, like security, freedom, and all that.  We’ve still got some work to do to re-learn, as you never forgot, that freedom isn’t free—it’s expensive.  And that if we don’t fight for our freedom, we’ll lose it.  We’ll continue to rely on you to cover for us—to defend us—while more of us figure all that out.  I’m sorry about that too.  And I’m really pretty embarrassed.  Ashamed, actually.

Also I’m sorry on behalf of all Canadians that so many of us, as exemplified even on our taxpayer-paid, state-owned media, take such pleasure in demonstrating their abject hatred and intolerance toward you and almost everything you stand for.  No, it makes no sense, it’s intolerant, it’s illogical, it’s mentally immature and demonstrative of a lack of any political sophistication, but frankly, we’re mostly talking about liberals here.  I’m absolutely sure you understand.

I’ve visited lots of great web sites like http://www.realamericanstories.com/ which were set up just to help Americans express their celebration of your country, and they offer great inspiration for the budding freedom-lovers here.  Here, our state-run media (what kind of country has state-owned, state-run media?—oh well) did much the same thing, except it seemed to be tainted by politics to me.  For example the liberals’ CBC touted the scientific fact that the father of modern liberal-left Canada, the Liberal Party’s Pierre Trudeau, was the most “Canadian” symbol.  And meanwhile the appointed leader of our country, the Governor General (who was a reporter for the CBC before her appointment by a failed Liberal Prime Minister), gave the directive —on Canada Day— for Canadians to officially celebrate an abortion mill operator and the most Canadian of symbols of the death of millions of once free, innocent, unborn Canadians, Henry Morgentaler, and gave him the highest government award.

So you see, in Canada, we’re not just instructed (and the instruction enforced through their “human rights” commissions) to “tolerate” those things that liberals tell us to tolerate (which by the way does NOT include Americans, Christians, capitalists, pro-life advocates, or conservatives…), but it is also deemed official national policy to celebrate those things and to openly demonstrate a national love-by-government fiat for their liberal-left and ever-so progressive dictums, whatever millions of us might actually think.

While thinking of July 4th, I couldn’t help think of the Canada Day celebrations me and my wife attended, at which nobody spoke about that whole freedom thing, except in terms of our “free” health care, in which our government looks after our health and forbids us —by law—  from using our own cash to look after our own families’ basic healthcare needs.

At one festive location, our “man-made global warming”-obsessed government supplied the crowd with Canadian flags (designed by Liberals years ago, using Liberal Party colors) printed on glossy paper in faded orangey-red ink, which were complete with the ubiquitous government of Canada logo printed on one corner of it and the Ministry of Heritage logo on the other—as if Canada isn’t really a country but for the benevolent government fiat.  Apparently it’s not a government of the people (etc), it’s a people of the government, here.  I felt like I was in the Soviet Union.  I still can’t figure out why the government had to hand out off-color paper flags to Canadians with their government advertising logos on them.  I’m sure you folks don’t do that.

Anyway, here’s a comedic “postcard” for you from me, a Canadian.  It’s a mock-up of a statue of Samuel de Champlaine, the founder of The Nation Of Quebec (the provincial subdivision of liberal Canada, which is the most important thing in our little blinkered universe besides gay marriage, abortion, the cult of multiculturalism, and government social programs), holding a plate of French fries covered in disgusting “poutine”—a revolting Nation Of Quebec delicacy.  This kind of thing offends the sensitive Quebecers, I’m told, as one of their leaders demanded this week—and got—an apology from the Canadian government for sending you something like mine, below, in an online invitation to celebrate Canada Day at our Washington Embassy.  Of course they have the freedom—the right—to be offended.  In Champlaine’s day, those things were worth fighting for, here. 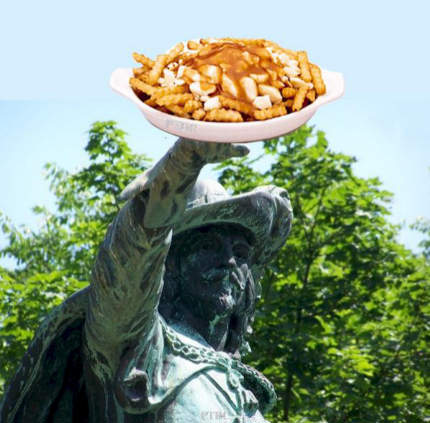