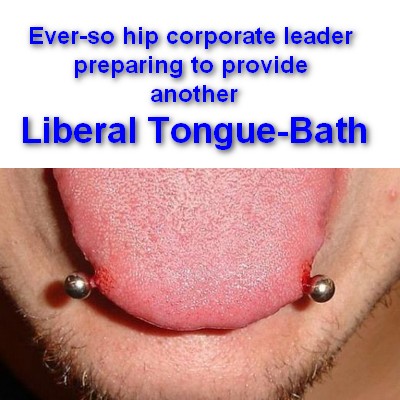 [dropcap]T[/dropcap]weetpoo discharged, followed appropriately by shitstorm. In other words we’re talking about liberals at work. Literally at work this time, though — like at the company office. (No I mean a supposedly real company — not state-owned CBC or Purolator Couriers or some such.)

The Tweet below epitomizes the sort of liberal-left Political Correctness-nutballery in which a company, trying to appear all “progressive” and hip and cool and down wit da kids an all dat (do the swells say things like that outside of my head?) gloms onto the latest PC or pop-culture nonsense cause. It drives me into eye-roll extremes beyond even Hillary Clinton’s limpid abilities. Today it’s Telus. UPDATE Oct 6 2016: Telus has now cowered and deleted the tweet in order to fake you out and pretend it didn’t happen. Glad we screen-captured it. 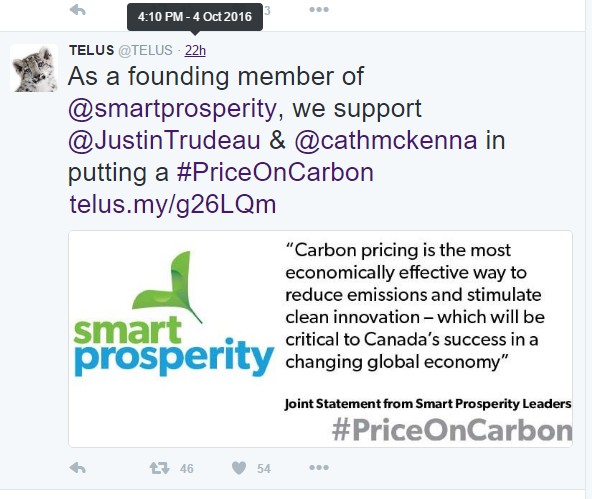 Way after the shitstorm developed, one of the still-remaining adults in the Telus office — presumably from a Canadian Telus office as opposed to one of their offices in India or Guatemala (Oh Canada we here at Telus care so much about you ‘n yer climate ‘n stuff!) — saw (or their 15-year-old daughter saw) that they’d caused a massive twitter storm of negativity, and they better do something about it.

The backlash was stemming largely from Canadians aged five and up, so that included a lot of people, who all saw Telus’s liberal face-licking for what it was: pure partisan politics from a massive federally regulated and government-protected corporation which has to come before the liberals’ CRTC division regularly for license renewals, and policy and regulation decisions favorable to them.

So Telus HQ leaped into action and…. failed. Utterly. They did one of those totally fake and really pretty insulting “apology” things in which it’s not actually an apology at all whatsoever, but actually a giant F— You.

“Not meant to be partisan or political…”. Yeah because a plainly left-wing, big-government, unilateral move by an outspokenly partisan and ideological Liberal Party politician and his partisan cabinet, in which a massive state-run carbon taxing regime, which is based entirely on liberal-left political ideology, is imposed on provinces and the people of Canada, to appease that whole “man-made global warming” lobby (and liberal voting-block industrial complex) –is totes non-partisan and apolitical. So sorry.

It’s a wonder they didn’t include a smiley-face.

The implementation of the policy is controversial in and of itself: done without consultation (compare and contrast with the years-long cross-country pipeline approval process and committee-work-a-palooza), about which several premiers are outraged, to fulfil an extremely controversial and totally political campaign promise; and their naming politicians personally in the tweet instead of referring to the government — none of this is at all partisan or political?

This is where we get “social license” (gag) to say things like “holy shit” in public. Or to put it more politely: 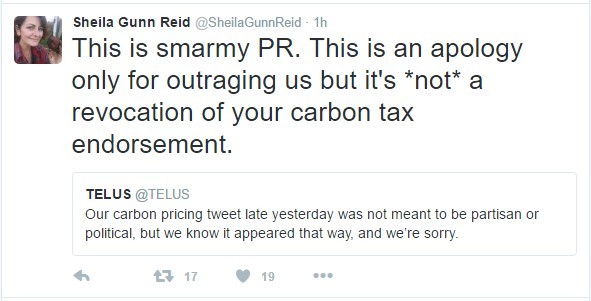 It was especially western customers — who remember the elder Trudeau’s infamous National Energy Policy — who rightly anger-tweeted their promise to cancel their Telus accounts and switch to… yeah exactly: To whom? Ah! Foiled again by liberals and leftists in Canada! It’s getting better every day! It really is progressive!

There are few options offering anything different in this already massively state-regulated country, wherein big-government instead of markets decide on the competition to be allowed to go up against Telus, what they will be mandated to provide to their customers, and at what cost — freedom and free markets be damned. This is not a free market. Or as this twitterer put it:

Sure there’s Bell, Shaw, Rogers, and maybe Wind offering almost identical plans due to government regulations, restrictions, and policies — and identical politics and liberal-left advocacy that you have to sign onto. Tell me again which of those alternatives relegated — for purely partisan political hack reasons — my beloved Fox News Channel to the digital-only, and available-only-at-an-extra-premium-price netherlands part of the cable offerings if you can find it at all (and only in non-HD), but were happy to provide the ardently left-wing state-owned CBC and the liberal CNN free and available to all (in glorious HD)?

Nonetheless Bell, Shaw, Rogers and Wind  — the “competitors” all holding one of those much sought-after state licenses to take your money — happily stepped up amidst Telus’s trouble — without actually using this fantastic opportunity to state their more reasonable position on this such as “we’re against partisan political advocacy.” You’ll just have to find out later.

Hi Taylor. We'd love to have you on board with us. Can you DM a contact number? I'll have sales reach out. ^MB 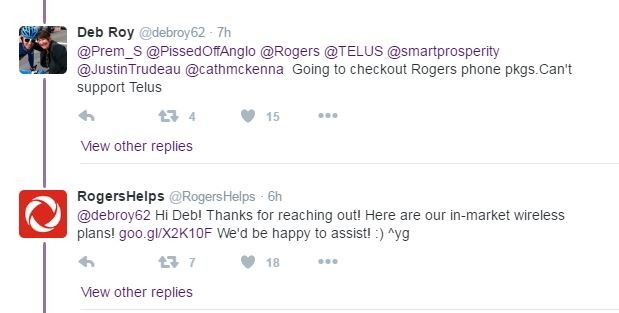 This tweet combined the shitstorm with the use of current US politics-style #Never[___] hashtag advocacy:

And lots of others are ditching one crony for another, but it’s a little like the U.S. election — you gotta vote for one of them in this country…

Shaw hasn't said they support my family being destitute yet. @TELUS

Time to turf Telus
I've been a customer since 2006, @TELUS; that ends now. Horrendous you guys would buy into Trudeaus carbon tax scam https://t.co/aG34C1zSef

And those tweets just go on, on and on, and on. There were also those who ignored, at least outwardly, the partisan political hackery, and went right to the bona fides of the Liberals’ carbon tax policy itself:

.@TELUS You rabidly support a policy that will increase taxes for Cdn families? For real? @smartprosperity @JustinTrudeau @cathmckenna

Will ensure every business customer of @TELUS in downtown Calgary is aware of their betrayal; it's beyond reproach #cdnpoli #ableg #skpoli

So Telus shareholders: all in all a great idea to let the leftists run the ship over there, huh? This one encapsulates it perfectly:

The positive side of all of this this is that this kind of explicit liberal-left crony capitalism (or at the very least liberal-left political advocacy) is the sort of thing that makes me and millions of other normal people detest the current Clinton-style pay-to-play Democrats in the US. It’s also a fact that people think of Vladimir Putin’s crony capitalist Russia and Xi Jinping’s China when they think of these stories. And they decide not to vote for them with their dollars or ballots.

Maybe these companies actually strive for a Canada more like communist China and its communist dictator leadership, just as their Justin Trudeau says he admires them.

The Liberal leader was asked which nation he admired most. He responded: “There’s a level of admiration I actually have for China. Their basic dictatorship is actually allowing them to turn their economy around on a dime.”

The current Canadian business model and this style of doing business would fit right in.

Previous article
The Trudeau Liberals’ pot smoking standards are the only thing in that government that’s NOT high.
Next article
Liberal: “Well by golly maybe we need conservatives running this show”