Updated as long as there are reader comments posted, and/or site-supporting cash coming in.  Yesterday yielded few commenters, and no web site-sustaining PTBC-supporting funds.  Like the American auto-makers, I guess this web site is offering product that is out of favor with the Canadian consumer. Therefore, I’ll sit here and wait for my left-wing-thinking government bailout…

1.   Maybe CNN should have hired some of those poor starving CBC artists to stand in line—they’re more reliable!:  The Jimmy Kimmel Show featured this clip of CNN trying to hype the huge voter turnout—people have been waiting for hours! Since 4 AM! …. See video at right.

2. Fairly unbalanced CBC –  The CBC Newsworld channel is currently conducting an ever so thorough discussion about U.S. – Canada relations.

The big news today is of course automotive, where layoffs on both sides of the divide are running rampant.  So for the view from the left, we’re presented with an anti-conservative and anti free-market capitalism Liberal Party genius.  For balance, from the FAR-left, we’re offered the esteemed full-on socialist view of a left-winger from the you’ve got to be kidding party.  … All these automobile industry problems? —**shocker alert**— Why it’s because of right-wing policies.  Again that’s right-wing policies.  Only government can save us.  Vote liberal.  … Soon after:  a left-wing expert from an environmental “think tank” bashing the Bush administration and its inaction on the greenhouse gasses and how the Obama magic will save the world.

Then the extreme-leftist, Maude Barlow.  She advised us as the new “U.N. Advisor on Water”.  She thinks Obama will be like a yummy glass of green water. … Favorite quote from her:  “The earth can’t take what we’re doing to it anymore!”   Seriously.  And so on…  BOTTOM LINE:  Vote liberal or further left.

3-a.    I think, if I understand correctly, this is the new CBC motto:

4. So I guess selling raw logs to other countries so they can turn them into the lumber products they use is fair ball then?  “If they’re gunna sell in our market, they must be made to produce in our market, therefore creating good-paying Canadian jobs.”—Chris Buckley, Canadian Auto Workers Union branch president on how a U.S. government auto-industry bailout must somehow include Canada.  Oh dear.  Please, liberal-leftists: Stop with this sudden we’re all like one country hypocrisy and twisted, carefully targeted logic—it’s making my stomach hurt…

5.   Did you know:  we in North America enjoyed unprecedented—that means historic or record-breaking—high car sales from 1992—and especially from 1997 or ‘98 and through 2007?  North America experienced the 12 best continuous years of North American light vehicle sales in North America’s history.  You didn’t know that?  No, I didn’t think so.  The CBC doesn’t report that kind of stuff, particularly while it’s happening.  Bush years, don’t you know. … But don’t worry, as a Liberal on the CBC informed Canadians earlier, this hardly unexpected drop in sales is not the fault of anyone (except Bush, perhaps, and those damn corporations).  It’s because of “right-wing” policies!  … And these rather sudden drops in the temperature outside is because of global warming!  … Try standing on your head to make sense of liberals.

6. HEADLESS CHICKEN –  According to Globe and Mail article:  “Mr. Dion says the Liberals will vote against any legislation they disagree with, even if the Tories deem the proposals confidence matters. Rejection of such legislation could potentially force an election at a time when the Liberals are in the process of replacing Mr. Dion as party leader.”  Interesting.  In that turkey running around after its head has been chopped off kind of way…  (Bwaaak to Matt B.) 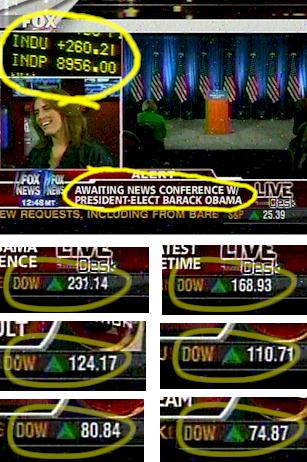 7.   Much was made in the Bush-hating snickering liberal media about the “fact” that whenever Bush spoke, the DOW dropped.  It was patently false, but that was the prevailing “wisdom” among those “wise” people.

These are actual screen captures, in order, untouched.

After he finished, the market went up again.  It ended up 248, nearly where it was before he started talking.

8. The good National Citizens Coalition reports these three “OUCH” items (and more) today in their Weekly OUCH! newsletter:
• The Canadian Television Fund supports the production and broadcast of high quality Canadian television programs. It is funded by the Canadian federal government and Canadian Cable and direct-to-home satellite industries [which are forced by law to contribute to that fund —Joel]. The 2007-2008 Canadian Television Fund annual report showed the $10,000 support of “Famous Whores in History” … Ouch!
• The $4.7 million program PromArt administered by the Department of Foreign Affairs and International Trade (that has since been cancelled) provided grants for international travel to Canadian Artists. One prominent example of why they cancelled this program was the $3,000 grant that they gave to a Toronto rock band called ‘Holy F**k’ to tour the U.K. … Ouch!
• Sick days and short term disability leave cost the taxpayer funded CBC approximately $15 million annually … OUCH!

9. VOTER TURNOUT SAME AS ‘04. And yet… Obama excited the nation into voting in historic numbers! … Why they wuz linin’ up fer hours! … They showed up at 4 AM I tells ya!  —that’s what the liberal mainstream media kept trying to tell us (see item #1 above).  Or to put it another way: LIES, DAMN LIES.  Before the liberal media lie any more to you, here are the facts:  The American University’s Center for the Study of the American Electorate concludes in a report today that voter turnout in the 2008 U.S. election was the same in percentage terms as it was four years ago — or at most has risen by less than 1 percent. That represents 60.7 percent or, at most, 61.7 percent of those eligible to vote in the country.  “A downturn in the number and percentage of Republican voters going to the polls seemed to be the primary explanation for the lower than predicted turnout,” the report said. Compared to 2004, Republican turnout declined by 1.3 percentage points to 28.7 percent, while Democratic turnout increased by 2.6 points from 28.7 percent in 2004 to 31.3 percent in 2008. … And I figure the percentage of mainstream media officially and openly in the tank for liberals and Obama rose 20 percent in 2008 such that now, fully 98 percent are totally and unabashedly in the tank for liberals and Obama.

11. Favorite reader comment of the day:  ‘You are an idiot”.  In this blog entry:  “CBC’s Henry Champ on Palin: warns all citizens she’s “anti-abortion”; and anti gay marriage…” … It’s one of those boomerang things….