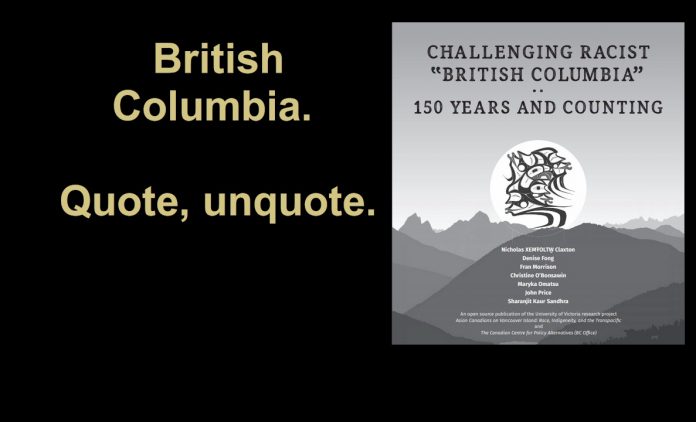 The Canadian Centre for Policy Alternatives (CCPA), where the “policy alternatives” they meekly speak of in their name is actually full-on socialism, but they’re Fabians so they hide that fact from you, has written another “report.”

They call it “a new resource for learning” — as in a resource they hope will be used by teachers at our public schools, in our businesses (even the non-state-owned ones), and within all our governments. It’s a sort of “1619 Project” and “Critical Race Theory” pamphlet adapted for BC, complete with allusions to George Floyd, BLM, white supremacy, genocide, and the works.

And why BC, and why now? Because BC is about to celebrate its 150th anniversary of joining Canada. Or as they might put it, 150th year of racism, genocide, white supremacy, and evil intent, please take a knee and raise your fist.

This ain’t no happy birthday card. Quite the contrary. It’s like a death wish. Or what they hope is a mortal blow. The CCPA name their handy “learning resource, “Challenging Racist “British Columbia”: 150 Years and Counting.”

It’s yet another bloviating scolding from the leftist hall monitors. It’s more far-left propaganda in which they strive to mimic the racial strife conjured-up by radical leftist BLM mobs (and their many leftist cohorts) in the United States, complete with references to “settler colonialism and white supremacy.” They even say it out loud:

“The Black Lives Matter movement that erupted after the murder of George Floyd, Breonna Taylor, Chantel Moore and many others reflects increasing frustration with and renewed determination to stamp out systemic racism, including the police violence that is a perennial part of it.”

I’m going to use quote marks a lot in my little ramble because in their “learning resource” for the kids, the CCPA puts British Columbia in scare-quotes. “British Columbia” they write. And not just because, as they write on their title page, “Our work and offices are located on the unceded, traditional territories of Indigenous Peoples of the pacific northwest.” (Hey CCPA here’s a learning resource for you: I think Pacific needs a capital as it refers to the so-named ocean. Think of, say, the Black Sea.)

No it’s more than us dirty colonizers squatting on stolen land. Here’s their explanation:

“We put that name in quotation marks and ask you to join us in questioning its origins and probing its past – does the term “British Columbia,” named after a colonizing empire and Christopher Columbus, not embody and project the history of racism in this province?”

Well no, idiot, it does not. But thanks for the crap question.

And like the smarmy cancel-culture inciters they are, they will claim they were just asking!, because, see, there’s a question mark at the end! Punctuation DOES matter ya know! We’re just “starting a conversation” you guys!

“…this resource strives to fulfill the call of the United Nations to get at the deep roots of the history, culture and mentality of racism and discrimination”1 in “British Columbia.”“

Wow. The “deep roots”, the history, the culture, the “mentality” —it sounds like a place of evil people with evil ways and evil minds.

But back here in the real world, nearly every British Columbian, all the normal people, and me, do not think of ourselves as people living in a place that “embodies” and “projects” racism. Because we don’t. It’s not our “mentality.” At all. Period. The truth — the facts — are actually something more like the exact polar opposite of that. And I think the only people who do embody and project racism are people like the CCPA and other left-wing agitators. They literally project it on others.

So the CCPA seeks to cancel BC. What then? Then they deploy the “alternative” they so yearn for, and you know, “Build Back Better,” and so on. Divide it, cause hate and consternation, weaken it, tear it down and destroy it, then build it according to their better, correct, centrally-planned specifications.

Great report. You’d think an enemy foreign power must have funded it. But you paid for it. The CCPA’s “learning resource” was, and I quote, “Funded by the Social Sciences and Humanities Research Council of Canada.” The Canadian government. So it’s your tax dollars at work, once again uniting and strengthening our country with accusations of white supremacy, genocide, us stealing land, systemic racism, a horrible history, culture, and mentality of evil, BC a racist province with a racist name, and more. You paid for it.

Tell you what, CCPA and government of Canada: one thing that should be in scare-quotes is “Policy Alternatives,” since the alternative the CCPA speaks of is found within their, “deep roots of the history, culture and mentality of”… Marxists.

Previous articleHuffPo Canada is dead. Or more dead, or whatever.
Next articleNot a vote-getter. Just a waste of cash.