Extreme left group not labeled in media report; allows group to describe themselves 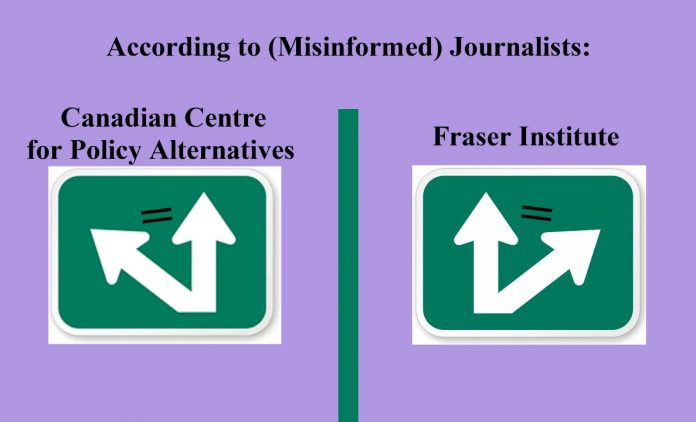 Today’s news story about the Canadian Centre for Policy Alternatives moves the news media needle even further left. Once again they’re mainstreaming it. It’s dangerous to mainstream a group that overtly advocates for socialism, government control of the economy and society generally, and as I see it, the end of freedom itself. It has to come with warning labels.

The Canadian Centre for Policy Alternatives (“CCPA”), where the “alternative” they speak of is an alternative to free markets and the end of capitalism, and I said, therefore freedom itself; and which seeks to cause a radical turn to what they think is a viable alternative, full-on socialism and an all-encompassing government control of the economy and the social structure of Canada —is sometimes referred to in the media as “left-leaning.” I’ve also seen “center-left.” This is ludicrous, obviously. It’s a lie. Gaslighting. The CCPA is an extreme, radical left-wing, socialism-espousing organization, in my learned opinion.

So it’s surprising (but only somewhat) that the National Post has fully joined with the state-owned CBC and the Star and others of the left or far-left media, who have decided to help mainstream an extreme-left group. The’ve become so obsequious to the radical leftists’ trendy “woke” crowd (perhaps they’re scared of threats to expose them as “a white supremacist” if they don’t toe to their line?), that it now doesn’t even refer to the CCPA as anything in particular at all.  Look:

…The commission didn’t respond to requests for comment on the report released Wednesday by the Canadian Centre for Policy Alternatives.

The centre is a think tank that does not take corporate donations. It describes itself as a source of progressive policy ideas and says its values are rooted in social justice and environmental sustainability. …

Thus we have an organization that espouses full-on socialism and an insistence on lock-step conformity with their far-left social and environmental revolution, being labeled in the paper instead as, well, nothing bad or unusual, or even left-wing.

Letting the clearly political and tendentious activist group CCPA describe itself, which is what they’ve done in this (unsigned, Canadian Press) article, is just hideous. Describing yourself is the very definition of subjective, and so it’s clearly not objective journalism, to say the least. This isn’t an opinion piece. It’s not an Op/Ed. It’s a news story. Or it’s supposed to be. But of course it really isn’t.

Has the National Post got no editors? Or are they simply hiring only recent grads from journalism school, who have been taught to think socialism is normal, and freedom and free markets and capitalism is “right wing?” Did they study in North Korea?

Stories which refer to the Fraser Institute (“FI”) are, in fact, most often accompanied by the dire warning that it is a “right-wing” organization, or it is “right-leaning,” and they often warn readers or viewers that it stands for free markets, as if that’s bad or even remotely unusual in any free country, or like it’s outside the real mainstream in all normal free countries including ours.

One month apart, the Toronto Star recently referred to the Fraser Institute as “the right-wing Fraser Institute,” and the CCPA as “the Canadian Centre for Policy Alternatives.” Recently the CBC labelled the FI as “right-leaning” while in another story, the CCPA is “the Canadian Centre for Policy Alternatives.” Is it these journalists’ contention that the FI is, objectively abnormally “right-wing,” notwithstanding its desire to simply maintain the existing economic system; while the CCPA is, objectively, totally down the middle and not at all abnormal and any contrasting label or warning is unnecessary? If so, they are intellectually dishonest. Really, it’s just an outright lie.

I’ve described this in more detail several times over the years. Here’s some actual graphic evidence I used in one article about the state-owned CBC’s hideous record:

So let’s get it straight: Left isn’t straight, and straight isn’t right. The Fraser Institute is simply objectively normal, or straight, since it strives only to research problems, and get government right, for a more prosperous Canada —as it currently exists. That includes (in my words, not theirs) maintaining our current freedoms and keep us from straying too far from our heritage and proven economic values; it is no more “right-wing” than Canada is “right wing.” No label need be applied here. In contrast, the CCPA wants to overturn the economic and social model that our nation was built upon and which we enjoy today, and put in its place something which is shown by historic, empirical evidence, to be dangerous at best, and disastrous at worst. They are radical, extreme left-wing activists. They are, objectively, and in overly moderate language, “far-left-wing.” The organization should be treated as such by the media.

Not labeling a radical, extreme left group seeking socialism, implies either that you think that group and its goals are normal and acceptable; or that you want people to think it’s normal and acceptable. If you you think the CCPA is unremarkable and you think that’s an objective truth, then you are frightfully misinformed and dangerous in your job as a reporter. A responsible adult needs to intervene. If it’s a subjective opinion, then you’re a terrible news journalist and need to be a responsible adult and find a new job because you know you’re doing wrong. If the newspaper lets it slide, it’s an awful newspaper, and it should fail. And it likely will. (If you’re the CBC, you’ve already failed.)

Of course if you believe select news media should be supported by and be provided welfare by the state, à la Justin Trudeau’s media slush fund which mimics socialist or communist nations and banana republics and their state media, then I at least see where you’re coming from. Perhaps you and your whole paper need a warning label too.

Previous article
Oh it’s a “child.” Not a “fetus” or “blob of cells” or “disease?”
Next article
More infuriating — and dangerous? — than the Jessica Yasiv case, if that’s even possible.