I was going to say that I was astounded by the liberal media’s apparent glee and excessive thoroughness in their moment-by-moment reporting of the yummy jailing of the decidedly non-liberal media entrepreneur, Conrad Black.  But actually, it all makes perfect sense of course.

And since the CTV’s on-the-scene reporter Lisa LaFlamme chose to take the trouble to inform Canadians that Conrad Black was transfered from his Florida home to jail in “a Cadillac Escalade” that was hired—“with blacked-out windows”—as if that “Cadillac” was somehow germane to the story (it does fit perfectly with their take on the story),  I thought I’d show you a picture of liberal-left environmentalist and man-made global warming junior guru (Algore’s li’l friend) Leonardo DiCaprio, taking a ride last week in his pal’s big Mercedes Benz carbon footprint behemoth.  (This is from the great TV show called TMZ in which they mock Hollywood liberals every evening as they depart from the huge SUVs and limos and BMWs and Bentley V-12s). 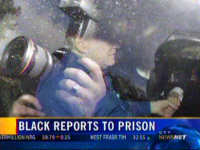 Leo DiCaprio is the one who repeats the mantra—and even made a movie called “The 11th Hour”—Oooh!  Scary! —informing us that we’re in a “man-made global warming” global emergency and crisis and Armageddon disaster calamity bad thing.  We must take the bus or ride bikes or walk or engage horses and carriages like the good old days.  We must, we must, we must, owing to that whole “emergency” thing.

I don’t know why he was caught not riding in a bus or taking a bike, or at least riding in one of those hybrid cars from GM.  I do know that when he arrives somewhere in public and he knows the photogs will be there, he arrives in a Toyota Prius.  So that’s weird.

And the media isn’t working on this story of hypocrisy and dishonesty which is a big part of the “man-made global warming” hysteria currently dominating the thinking of all liberals and leftists. They had to fly down to cover the Conrad Black arriving in a Cadillac news nugget.