CTV is more nervous about an election than Liberals 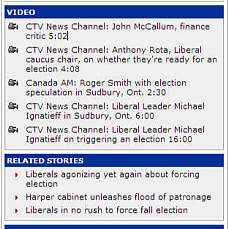 While the rest of us are getting ready to send our kids back to school, get to work on time, pay our taxes and our bills and generally live life, Canada’s liberal-left media is in high anxiety.  They always are when polls are tight and the political dynasties they’ve created, nurtured, and anointed are, at best, in a fight for their lives.  Canada’s “natural governing party”, one of their phony sacred icons… doesn’t appear so be so “natural” any more.  In fact it’s anything but “organic”.  It’s wholly man-made and full of insecticides and fertilizers.

For the liberals and their media, keeping liberalism alive is an obsession.  A fetish.  They’re Church of Liberalism clerics, like their brethren the teachers in the schools.  It’s all about liberals and pushing liberalism.  All day.  Every day.  The media start each morning fretting about what’s up in the world of liberals and how they might achieve their goals in the face of “deniers” and “the party of no” and “ideological conservative partisans” and “racists”.  How the Liberals might consider conquering what they insist on calling the “Tories” (while rarely calling liberals “Grits” and never properly calling NDPers “socialist” or “Marxist” “radicals” or ‘extremists”).  Will there be an election?  Are the liberals ready?  Is this the right time?  What does Jack think?  Have we interviewed every living Liberal or leftist yet?  What’s Goodale’s take on this?  How about McCallum?  Can we get Ottawa Bureau Chief Correspondent of all-get-out Bob Fife (no relation to Barney) to say “Well Lloyd we all know there are some knuckle-draggers in Mr. Harper’s caucus” again somehow?

Today at least twenty percent of their featured front page headlines are about precisely the same story, worded differently, all explaining the same thing.  Of the 15 “CANADA” or “POLITICS” stories presented on CTV.ca this morning, here’s just three of them.  They’re not even from today, they’re from the past three days, but it’s so important to them that they shoved more recent news off the lists of featured “news”.

Try to decipher the ever so subtle narrative in the three stories featured today which are all on the same page:

Like the fictional two-headed llama, the Liberal leader will be pushed and pulled in opposite directions as his MPs agonize over whether they should—finally—pull the plug on Stephen Harper’s minority Conservative government.

CTV’s Roger Smith, reporting from Sudbury, said the Liberal party is currently split between doves and hawks, with Ignatieff taking charge of the latter group and pushing for an election.

· “Ignatieff: Harper government on ‘life support’” [in which the “life support” is, according to the benevolent Ignatieff, himself and his gracious party] (it’s a Sept 1 story)

Liberal Leader Michael Ignatieff’s main task today: turn the doves in his caucus into hawks, and set forth a plan to take down the Tory government in the fall.

For good measure, and as if to prove they’re on point and employing the same narrative, CTV’s liberal media mouthpiece sister, the Globe and Mail, reinforces the “hawk/dove” paradigm today with this headline:  “Ignatieff shows his hawkish side”, in which G&M reporter Jane Taber, who is not related to any CTV reporters, reports “Michael Ignatieff’s hawkish side was on display Monday … contrasted with his more dovish caucus members…”.

Suggested followups for CTV:  Begin a series on how those darn politicians can’t stop talking about elections and defeating “Tories”!  Use “hawk” and ‘dove” lots!

[Liberal Senator David] Smith suggested Liberals are in no rush to topple the government at the first opportunity.

“I don’t think there’s a presumption that every time there’s an opportunity to have an election that you have to do it. We still want to see Parliament work,” he said.

“You can’t push the election button every time . . . I think that is irresponsible.”

CTV then polls its readers.

In a speech Tuesday to the Liberal caucus, Ignatieff said Harper’s time as prime minister, “is over.”

“I cannot support this government any further,” Ignatieff said to cheers and wild applause…

What do you get when you cross a Dove and a Hawk?
A Puffin,…..unfortunately!

I should Twitter that birdie reference… but I’ll add it as a Reader Email.