Proven to be fake news almost immediately — even on the left’s infamous and liberal-biased “fact-checker” Snopes.com — that didn’t stop CTV News from posting it and featuring it on their website as a “Don’t Miss” item. 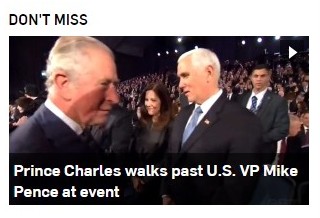 Unable to maintain the fake news ruse, the CTV itself later had to post a new article — but of course they can’t even do that right: they chose to headline it in the form of a question, which I believe they did in order to leave the option open: “Did Prince Charles snub Mike Pence in Jerusalem?”

When you know that the answer to your own question is “no,” and you’re supposedly a straight-up news site, then that headline is obviously journalistic garbage.

That article explains — begrudgingly, I guess — that “The viral clip, which has been retweeted thousands of times, was greeted with a mix of praise and skepticism online” —is in fact nonsense. Note how they act as though they are above the fray though. They willingly helped spread the fake news with the “Don’t Miss” “news” article to help make it go “viral,” and then they report the news that it went viral.

And they continue to promote the fake news! Yes, their original fake news video (and it’s just a video — no story, no explanation, no nothing) remains as a “Don’t Miss” item. Great news site, huh? You don’t know what’s fake and what’s real, because it’s both, at the same time.

Also noteworthy is that the later explanatory article is not featured as a “Don’t Miss” story, it’s just another text link buried in there amongst the other stories. 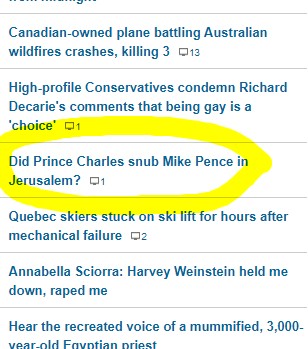 Being better than the state-owned CBC is a very, very low bar indeed.