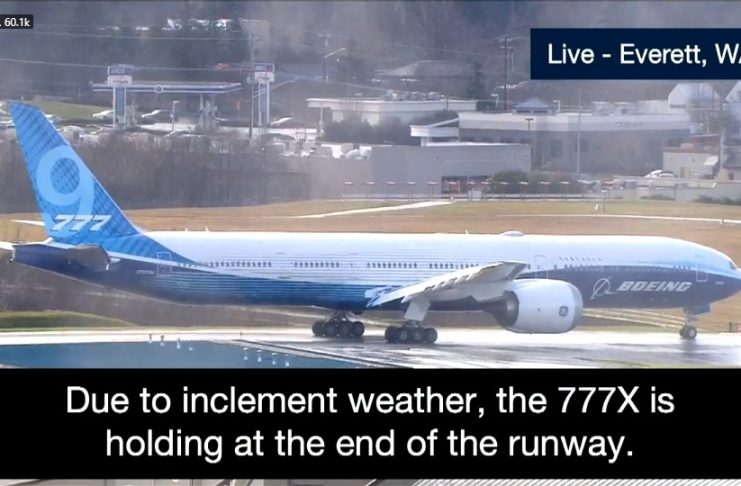 Watching the live stream of the first test flight of the Boeing “777x” because I’m an aviation geek. The 777x is amazing for plenty of reasons, mainly its new engines, General Electric GE9X engines, which are so big you could slide a 737 inside one of them. They are more powerful than other engines, Yet they are more efficient. That is truly awesome.

But the live-streaming event, put on by Boeing itself, is so bad — so technically bad and bad in almost every other way — that I can’t help think if I were the Boeing boss, I’d fire all of the people involved in slapping this thing together. The sound cuts out constantly, the video stops all the time, the commentary is painfully stupid, and really, it’s a massive fail for a company that needs to convey an image of technical competence if not perfection, now more than ever in light of the 737 Max fiasco. It has accomplished the opposite here.

Two other annoyances: After asking the dumbest questions of those in the crowd (Boeing employees mostly, naturally), the young woman (too young?) they hired to ask these questions replies to every answer with “awesome.” A guy could say “I work in the paint department,” and she will say “awesome.” A woman could say “I like ham sandwiches,” and the interviewer would say “awesome.” No matter what, every single comment is “awesome.” If ham sandwiches are awesome, that leaves little room to describe a SpaceX rocket launch, or indeed this 777x test flight.

Then it’s over to the booth, where another gal — a Boeing spokeswoman — is being asked light technical (really just PR) questions, for interest and color. Every start to every question asked of her is, “absolutely…”  Every time. Ask ten questions, you’ll get ten “absolutelies.” “Could you say a few things about the engines on this plane?” “Absolutely…”  Every. Single. Time. Well not quite. Once or twice, she started sentences with the word “so” —as nearly every single millennial does these days (with sentences being peppered with the word “right?” inserted all over the place, as if in a constant quest for their words to be validated).

If this is representative of Boeing’s human resources at work, I’m afraid to travel.