Home Canada CTV and Don Martin — not the Liberals — bring up the... 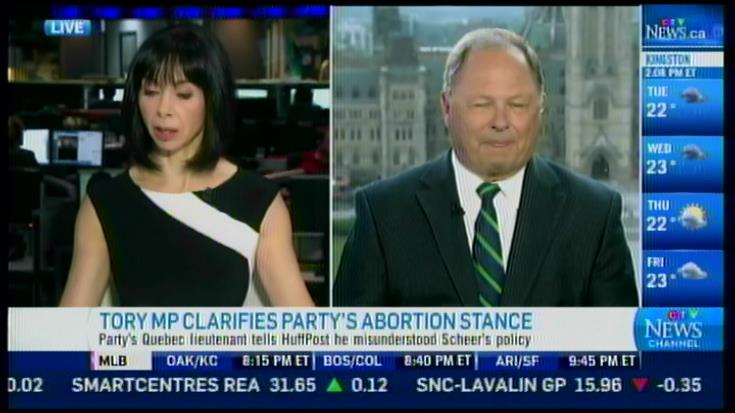 A crass, deceptive, political fear-mongering narrative years in the making, which has done decades of useful electoral work for the Left and its media division, all of whom were lying, the Liberals didn’t bring it up this time. It was Don Martin of the CTV. Good job, Mr. Martin and Team CTV. I smell an “independent” senate seat and possibly federal funding for the CTV.

Seriously. How did this conversation happen where those words needed to be brought up? Did they get a memo? At some point you have to wonder where these things originate, because it doesn’t make logical or journalistic sense on its own.

Yet for two minutes and forty seconds, it was all about the nasty Conservatives’ abortion agenda (huh?), Andrew Scheer’s ever-so dictatorial and jurassic stance regarding same sex marriage (huh?), and the notion as stated by Don Martin that Mr. Scheer “doesn’t believe in man-made climate change” (huh?). Weirdly, all these are strictly liberal-left talking points, yet it’s about Mr. Scheer and the Conservatives.

And in that same conversation, after listing all those liberal-left talking points (for no good newsworthy reason, or any reason whatsoever in my opinion), Don Martin does the Liberals and NDP a solid and utters the very words all Liberals (and further leftists) rely on to (and exclusively to) cause damage to the Conservative brand; notwithstanding the fact that it is total and absolute politics-ridden nonsense and a lie, and everybody in the media and politics knows it. Based on all the abovementioned liberal-left talking points, which were mentioned in a news setting for no good reason except to talk about liberal-left talking points, the Liberals, Martin reported, may very well be looking into a Conservative “hidden agenda!”

Mission accomplished. Now reporters can and will ask Mr. Scheer and all Conservatives about a “hidden agenda.” Over and over. And the political parties didn’t even have to do the dirty deed. Their media did it for them. Outstanding. What a team.

“You’re gonna see a theme, a narrative from the Liberal war room, that Andrew Scheer has really got the hidden agenda that they always said Stephen Harper had but funny, it stayed hidden while he was prime minister! And Scheer insists it will stay hidden if he is prime minister, so you know, in a war of words, Sometimes truth is the first casualty, so you can expect a lot of that in the months ahead.”

Saying Stephen Harper managed for this delusory “hidden agenda” to “stay hidden,” is just a lie. It’s horrible reporting — and intellectually dishonest for a pundit, if that’s what he’s playing (and I honestly don’t know what the hell his role is). Here’s a “FACT CHECK” for the media: Something that didn’t exist, cannot “stay hidden.” And then doubling down on the stupid by saying, factually incorrectly, that “Andrew Scheer insists it will stay hidden,” is pure political bunk, squared. It can’t “stay hidden” if it is an illusion.

Martin managed to drop the ball like it was a lead balloon. He might have used his role as a journalist to put paid to the garbage that this “hidden agenda” conspiracy theory is. As an elder in the journalism community, he might have used his far-too powerful pulpit to put an end to the garbage reporting on this generally, and help restore some respect and decorum to the newsroom, tho it’s a long, long road ahead. Nah. Too much fun being part of the groupthink herd, it appears.

Foisting bullcrap on the public instead of ardent truth-telling especially where stories need to be corrected as a result of crass political marketing, is bad journalism. Doing the bidding of the Left is beyond bad journalism, it’s malpractice. And not taking the obvious opportunity presented to you to do the right thing, causes most normal truthful people to see the CTV as having a hidden agenda. Legitimately.