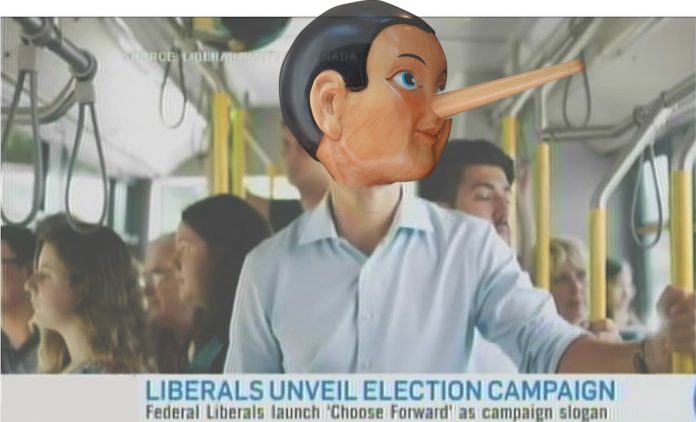 Mr. Spector didn’t mention the lies told during Justin Trudeau’s four years in office. Or shall we say the “experienced differentlies?” The choice of language is important in slimy and corrupt politics. Trudeau has a tenuous grasp of the concept of truth as Spector observes, or more likely, a grasp of the importance of it. We all see it. He and Team Liberal choose his words very carefully. Deceptively. It’s a pattern you can’t experience differently.

There’s lying, and there’s deception. Both are in good supply at Liberal HQ (and I don’t hesitate to say all parties do it). Sleazy politicians started using the deceptive term “investing” and “our government is investing…” instead of “redistributing your money that you earned” or “government spending of your own cash” because it tested better in focus groups. “Investing” just sounds better. More legitimate. “Spending” can sound bad, especially when the government spends even more than they’re taking in (these massive deficits are one of their biggest lies), which is itself way too much. An abominable percentage of our income, and it’s our money — up to half or more of the money we earned  — is what they’re spending — on other people. I think we deserve the right language.

They won’t use the term “redistributing,” even though that is precisely what they are in fact doing. It sounds even worse to some, because it is literally a tenet of socialism. So they never use that term, even though some parties are literally socialist — and the socialists won’t even admit to that, faking you out with terms like “democratic socialist,” or in some cases, “Liberal Party”. So it’s a BS stew.

And they do mix and match, as if to prove how dishonest they are. When they’re spending your money on the things with which they ideologically agree, they’re “investing” your cash. When it’s on things with which they disagree, they’re “spending.” Examples: redistributing your cash for some people to get “free” child care in a state-run childcare (and “early learning” — wink!) depot is “investing in families,” but tax cuts are deemed to be “spending” (even though by our crafty use of truth and logic, they never even got the money to spend, because, you know, tax cut). While bailing out the news media with tax dollars is “investing” in the (then state-run) news media, securing our borders requires the “spending” of untold thousands “of taxpayers’ hard-earned dollars.”

Thus Trudeau and the Liberals are being patently dishonest in this cringeworthy — and deceptive — tweet from the Nanny-in-Chief and his deputy, the Minister of Nannies:

Raising kids is a joy, but it's also expensive. Our government is investing to help new families with the Canada Child Benefit & more options for parental leave – so you can spend more time with your kids & less time worrying about the cost of raising them. Read this thread 👇 https://t.co/wBAnsvCWsB

The tweet is all the more ironic as Trudeau and his wife (am I allowed to call her a wife or is that uncool now?) have no need for childcare (“and early learning” — wink!), whether it’s state-run or otherwise, because they have a full-time nanny for their three kids; but, see, she is paid for by you, the taxpayer, not by the Trudeaus. They actually pay for another nanny themselves, so they have two. Can’t get by with just one private full time nanny. I mean they’re not animals. Hey, is his nanny a good “investment?”

Don’t get confused by other uses of the term “investing.” For example, journalists in Canada and elsewhere are truly and fully invested in Justin Trudeau and his Liberals, and progressivism more generally. That’s slightly different. But true to its definition, that’s an investment that is truly paying off, what with Trudeau’s 600 million dollar news media sponsorship fund, um, “investment,” and such. It’s actually a win-win for those folks. It’s really neat.

Let’s get this straight: “Our government is investing…” is deceptive nonsense. It’s not the Trudeau Liberal government’s money. It’s yours. And they should say that every time.

And in any classical definition of the word “investing,” what the government does with your money when they spend it on their pet or purely ideological or political or social-engineering projects — is not “investing.” They know the real definition, and if they’re in need of instruction they could just ask the investment managers at their Canada Pension Plan Investment Board how they invest CPP money — they do not spend it. Or use a dictionary:

1. To commit (money or capital) in order to gain a financial return: invested their savings in stocks and bonds.

So, “Our government is spending your money…” is nominally acceptable if you truly want to be honest and accountable. Now, what they’re spending it on, is another, even bigger problem. But I’d like to see how changing the language to “Our government is spending your money…” (or for campaigns, “Our government would spend your money on…”) would affect the campaign promises made by by these professional spenders, because I’m pretty sure (and the pols know this very well) it would have an effect on people’s perceptions about policy, and on their voting choices. And so they lie.

Previous article
CTV and Don Martin — not the Liberals — bring up the nefarious Conservative “Hidden Agenda.” I kid you not.
Next article
Is this allowed? Using state-owned equipment and staff for an overtly political campaign backdrop.