If you were appalled by the size and scope of the latest federal budget and its monumental deficit and its addition to our already historic 1.2 TRILLION dollar national debt, and you should be, you should see what they skimped on. And you should ask yourself how in the world they found anything to skimp on, given the carte blanche (your carte) flood of cash being spent on everything from the insane to the ridiculous.

The City of Delta, in BC, has in the meantime requested that maybe they find the equivalent of 20 cents to help blind people read.

The local Delta Optimist (rather ironic name in this case) reports: 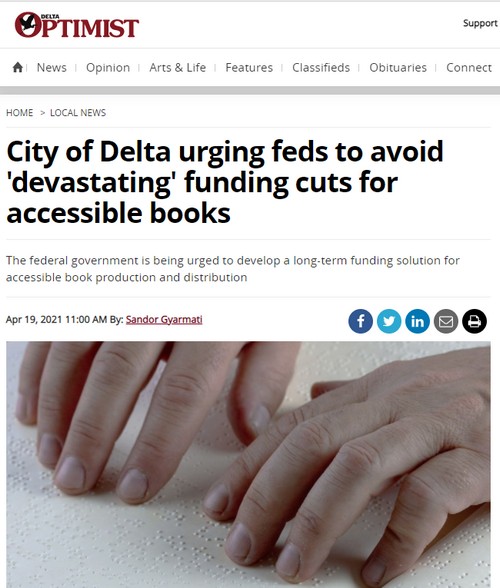 DELTA BC — The City of Delta is asking the federal government to ensure those with visual impairments don’t lose access to specialized books.

…The federal government’s 2020 Fall Economic Statement included an announcement of cuts to funding for accessible book production for those with print disabilities.

Both organizations receive combined annual funding of $4 million from the government, which planned to reduce the funding by $1 million annually beginning in 2021 before ending entirely in 2024/25.

Blind people just cost too much money, according Chrystia Freeland and Justin Trudeau. Sort of like the veterans I guess.

They’re shoveling money out the back of a fleet of dump trucks across the nation, but they couldn’t find the equivalent of you spending 20 cents for the truly needy. 20¢. Per year. For a rare, actual, legitimate government function.

After some blind folks with the help of local library officials and the City of Delta pleaded with their MP, which is apparently what is expected of us plebeians now, Delta MP Carla Qualtrough (Liberal) later reported to them that this year’s funding cut was somehow reversed. Apparently Qualtrough very quickly got the Finance Minister to open her eyes, and got the funding back for this year, without getting fired, so credit where credit is due.

Qualtrough has been legally blind since birth and is a passionate advocate for the rights of persons with disabilities, according to her Web site. So she saw perfectly well the idiocy here.

One can only wonder how it came to pass that they would see fit to cut braille funding to blind Canadians, what with all the idiotic and seemingly unlimited spending they are now doing. One can only imagine they weren’t looking carefully at what they were doing, or they were willfully blind to their actual jobs, and to humanity. Or they hoped you would be.

Alas Qualtrough reportedly had no assurances about the future funding, so the Liberals’ plans to ditch the blind folks are still in place.