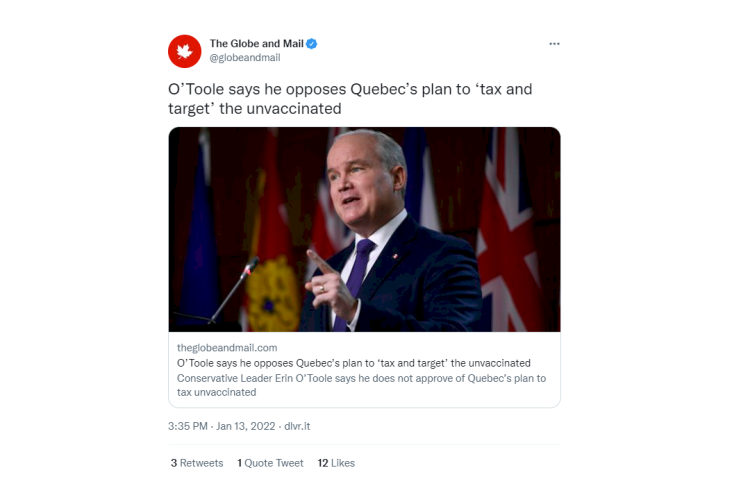 It’s true. At least the Liberal Party’s Globe and Mail division says it’s true. They quote him so it seems possible.

Conservative leader Erin O’Toole actually came down definitively against something stupid. No, not the state-owned CBC, sorry, he’s still unsure about those guys even after 50 years of anti-conservative propaganda (now with more woke!). No, it’s re Quebec’s threat to tax the unvaxed deplorables in Quebec (that’s déplorables en francais, which I point out because it’s the law in Quebec!). O’Toole made no mention of any study group on this hot topic, nor a “let’s review what our position is by polling Torontonians,” nor even a “well we disagree with Legault but elect us and we’ll do it too, only differently!” — à la the carbon tax (of course we know he wouldn’t tell us THAT in advance!)

Conservative Leader Erin O’Toole says while he respects provincial jurisdiction, he opposes Quebec’s plan “to tax and target” those who are unvaccinated against COVID-19.

And he did it before the other party leaders, Justin Trudeau and that other one. They’re still conducting polling at their CBC division and over at liberalvision CTV, and possibly reviewing what Joe Biden’s crack Twitter team are saying.

Maybe O’Toole read my article on it from yesterday (yes, I actually came up with this before he did) and after being totally blown away by the majesty of my writing and the irreducible logic, there was obviously no alternative but to agree with me and come out with an official statement. Maybe I’m on crack.

Also shocking: The Globe and Mail wrote it up without too much snark or derision. For example, rather than painting him as an anti-vax lout and an anti-science yuck-face, and, you know, a racist and misogynist like Justin said of the other vaccine-mandate-averse, they properly alerted readers thus:

O’Toole, who encourages vaccinations but opposes vaccine mandates, called the proposal unfair, predicting that it won’t persuade those who are hesitant to get a shot to finally roll up their sleeves.

Maybe that reporter is on crack.

Of course, tomorrow is a new day, and once their large team of progressive columnists gets ahold of the news in their paper (which seems to be the only one they read), they should come out firmly in favor of, um, whatever camp Just Trudeau finally lands in. Or is Trudeau waiting for the G&M boys and girls to tell him? Either way, matchees!